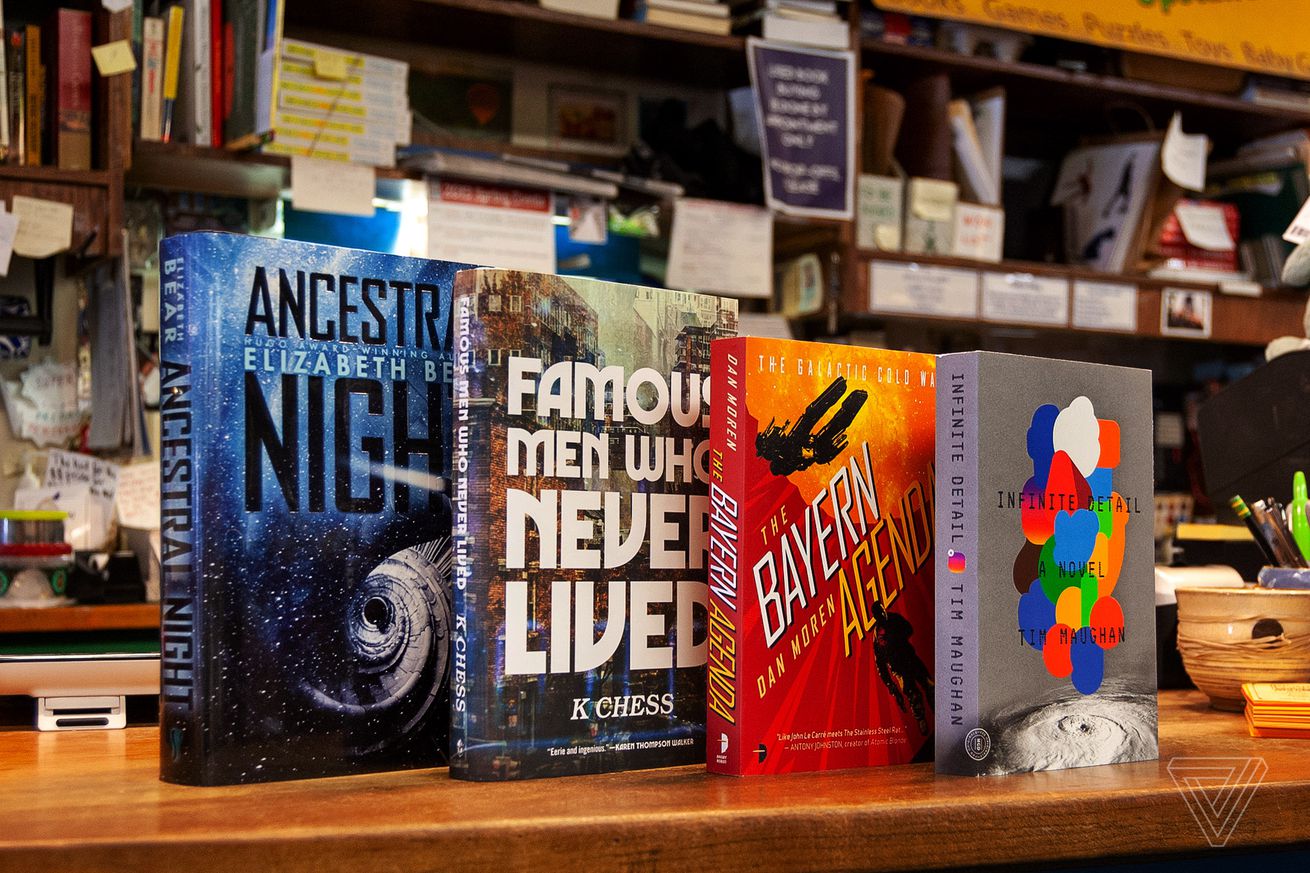 Now that my son is in school, I’ve been wanting to introduce him to some of the classic books that I read when I was younger. The first book on the list was a no brainer: J.R.R. Tolkien’s The Hobbit, which has become a nightly read for the two of us.

Reading The Hobbit out loud has made me see the book in a totally different light. Tolkien’s language is fantastic, building up tension through a series of adventures as Bilbo, Gandalf, and his dwarvish companions get into trouble and back out of it again. It’s the perfect novel before bed — plenty of excitement, but most importantly, plenty of cliffhangers to keep him waiting for me to read it the next night.

For readers looking for something a little more recent, this year is a particularly good one, and the next couple of months are particularly appealing, with March and April bringing some highly-anticipated books. Here are 11 science fiction and fantasy (and one related nonfiction) books to check out in the first half this month:

The Fever King by Victoria Lee

In the distant future, the United States has collapsed, and magic has appeared in the world, infecting people like a virus. Noam Álvaro awakes in a hospital, only to discover that the virus has killed his family, but left him with the ability to control technology. As he begins to learn how to use his newfound powers, he looks to undermine his nation’s ruthless policies and affect change from the inside. Kirkus Reviews says that “Lee’s debut is a thriller with obvious allegorical connections to today’s political climate, but it doesn’t read as message-y; even those with genre fatigue shouldn’t regret giving it a try.”

In her latest, Elizabeth Bear returns to space opera with a story (the first of a series) set in the distant future, following a pair of salvage workers, Halmey Dz and Connla Kurucz, and their AI, Singer, who endure a meager existence, hoping to strike it rich with a big haul. While out investigating an abandoned ship, Haimey is accidentally infected with an alien device that gives her some fantastic abilities — which in turn makes her a target for various powerful factions in the galaxy, from governments to pirates, and which could bring the galaxy to the brink of war. Publishers’ Weekly gave the book a starred review, noting that its “richly detailed milieu is successful on many levels, digging into the nature of truth and reality, self-definition vs. predestination, and the calibration of moral compasses.”

In K. Chess’s debut novel, Famous Men Who Never Lived, a nuclear war in an alternate world brings 156,000 refugees into modern-day New York City. A doctor named Hel is one of those refugees, and she has an incredible amount of trouble adapting to her new life in our world. To cope, she works to create a museum for her lost home to preserve the memories and stories that are now lost. As she copes with anti-immigrant attitudes and hostility, the sole surviving copy of a science fiction story from her world, The Pyronauts, goes missing, and she’s forced to contend with how far she’ll go to find it and come to terms with what she’s lost. The Millions notes in its review that the book “illustrates a side of immigration that often gets left out of the news reports: how refugees, seeking safety and security, first must paradoxically sacrifice those very things; how homesickness and grief linger without relief.”

In the nearish future, the world is overrun by surveillance from major corporations that seek to control the world. There’s one place that their reach doesn’t touch — the Croft, located in Bristol, an alternative community where artists have cut themselves off from the internet and the rest of the world. The book alternates chapters between this tense existence, and the events after a cyberattack destroys the internet and the world’s infrastructure. Kirkus Reviews says that the book is “an original and engaging work of kitchen-sink dystopia” and describes it as having “a blush of cyberpunk, a shakerful of Neal Stephenson, and a dash of Cory Doctorow’s speculative fiction.”

The Bayern Agenda by Dan Moren

Dan Moren’s latest novel is set in the same world as his 2017 debut, The Caledonian Gambit, but it’s designed as a standalone entry into the world. In this adventure, Simon Kovalic is a spy for the Commonwealth of Independent Systems, which is enmeshed in a cold war with the Illyrican Empire. On his last mission, he learned that the Illyricans have a relationship with a planet-sized bank called the Bayern Corporation. But after Kovalic is injured, his ex-wife takes over his team, and when he learns that their cover has been blown, it’s up to him to rescue them.

The Lady from the Black Lagoon: Hollywood Monsters and the Lost Legacy of Milicent Patrick by Mallory O’Meara

One of the most iconic movie monsters in Hollywood history is the creature from the 1954 film Creature from the Black Lagoon. In this history, Mallory O’Meara delves into the forgotten creator behind the design of the creature, Milicent Patrick. The book has picked up a starred review from Publishers’ Weekly, which calls it a “fascinating slice of Hollywood history with a feminist slant, correcting a sexist wrong from decades ago and restoring Patrick to her rightful place of esteem.”

Last month, we interviewed Serial Box’s superteam of science fiction authors — Becky Chambers, S.L. Huang, Yoon Ha Lee, and Rivers Solomon — who are writing a new serialized story called The Vela. The series follows a mercenary named Asala, who is hired to find a missing refugee ship lost in a dying star system. That refugee ship happens to contain a secret that could determine not only if the refugees survive, but the entire system itself.

The True Queen by Zen Cho

Zen Cho published her debut novel Sorcerer to the Crown back in 2016, introducing readers to a Regency London where Zacharias Wythe, England’s first African Sorcerer Royal, contends with infighting and court politics, along with a particularly gifted young magician. This standalone novel takes place two years later in the same world, and is about sisters Muna and Sakti, who awake on an island — their memories taken by an enchanter. With Sakti beginning to fade away, the pair must travel to England to seek help from the Sorceress Royal Prunella Wythe, who has set up an academy to train women magicians. Kirkus Reviews says that “Cho offers plenty of sharp commentary on the misogyny and colonialism of this magical version of Regency England, in which spells are thrilling and exotic when performed by a witch from the Far East but scandalous when cast by an Englishwoman.”

The Rosewater Insurrection by Tade Thompson

Tade Thompson earned a new wave of acclaim for his novel Rosewater when Orbit republished it last fall. The book introduced readers to a Kaaro, a government agent who stumbles upon Rosewater, a community living on the edge of an alien dome known as Wormwood. In this sequel, Wormwood is expanding its influence over Rosewater, and the city faces resistance when it declares independence. Kaaro’s lover and fellow agent Aminat is tasked with capturing a woman who could be key to humanity’s survival.

Nisi Shawl is the editor behind a new anthology, New Suns: Original Speculative Fiction by People of Color, which contains stories from 17 authors of color, including Steven Barnes, Better Worlds author Karin Lowachee, Silvia Moreno-Garcia, Rebecca Roanhorse, and more, along with an introduction from LeVar Burton. Publishers’ Weekly gave the anthology a starred review and praised the “book’s wide range of stories,” saying that it “will appeal most to readers of multiple genres interested in exploring the world’s various cultures, and is well suited to library collections.”

G. Willow Wilson’s latest novel is a story set during the Spanish Inquisition and follows Fatima, a concubine in Grenada’s royal court, and her friend Hassan, the palace cartographer. Hassan has a special ability: he can draw up maps to new worlds. When Fatima accidentally reveals Hassan’s powers, they’re forced to flee, aided by a series of strange individuals. The novel earned a starred review from Kirkus Reviews, which called it “a thoughtful and beautiful balance between the real and the fantastic.”

Check back later in March for the next batch of books coming out this month.