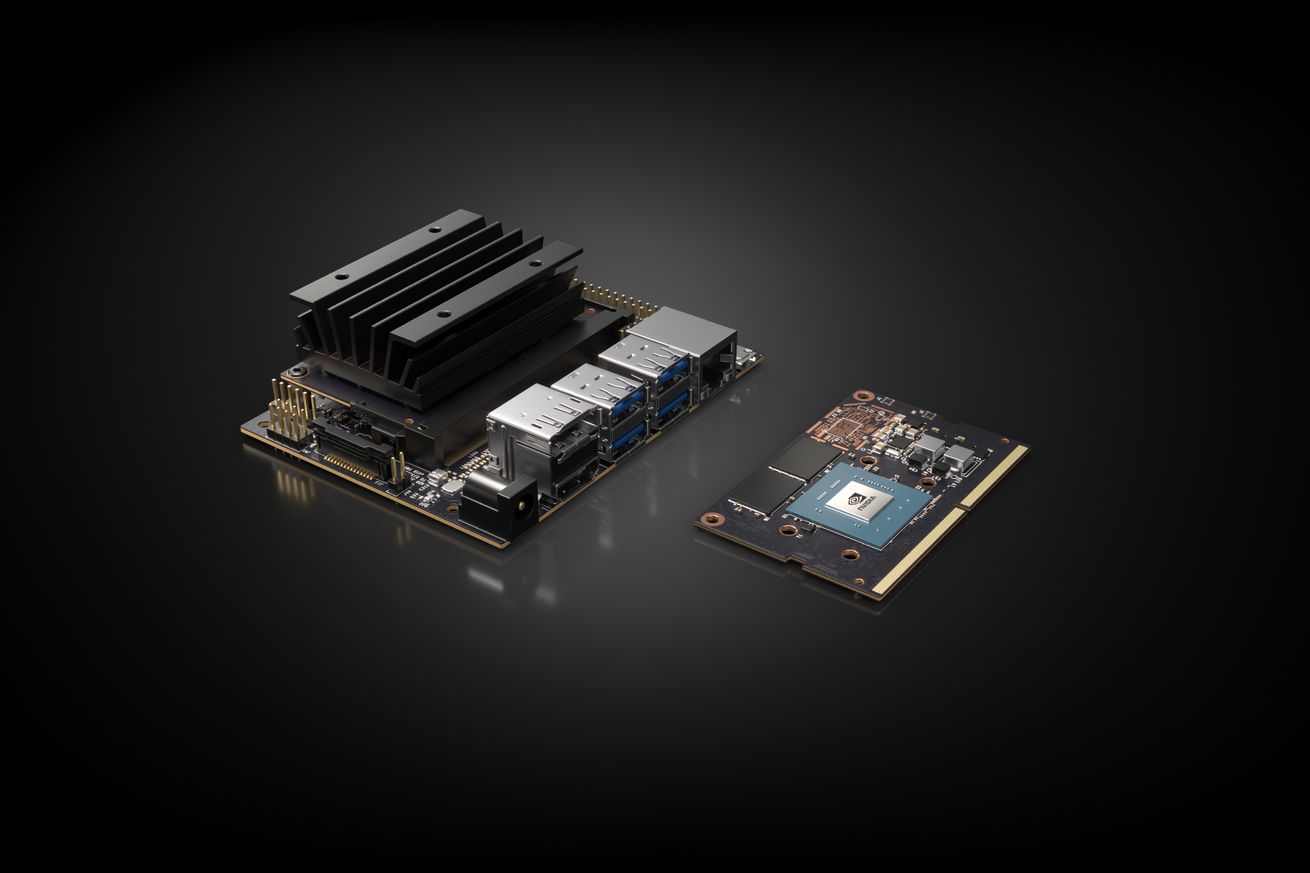 In recent years, advances in AI have produced algorithms for everything from image recognition to instantaneous translation. But when it comes to applying these advances in the real world, we’re only just getting started. A new product from Nvidia announced today at GTC — a $99 AI computer called the Jetson Nano — should help speed that process.

The Nano is the latest in Nvidia’s line of Jetson embedded computing boards, used to provide the brains for robots and other AI-powered devices. Plug one of these into your latest creation, and it’ll be able to handle tasks like object recognition and autonomous navigation without relying on cloud processing power.

This sort of setup is known as edge computing, and because it means that the data being processed from cameras and microphones never leaves the device, the end result is usually hardware that is faster, more reliable, and more secure. So everybody wins. Past Jetson boards have been used to power a range of devices, from shelf-scanning robots made for Lowe’s to Skydio’s autonomous drones. But the Nano is aiming even smaller.

Nvidia is launching a developer kit of the Nano targeting “embedded designers, researchers, and DIY makers” for $99, and production-ready modules for commercial companies for $129 (with a minimum buy of 1,000 modules).

The company also unveiled a fun DIY project for any advanced makers: an open-source $250 autonomous robotics kit named JetBot (above). It includes a Jetson Nano along with a robot chassis, battery pack, and motors, allowing users to build their own self-driving robot.

With the $99 devkit you get 472 gigaflops of computing powered by a quad-core ARM A57 processor, 128-core Nvidia Maxwell GPU, and 4GB of LPDDR RAM. The Nano also supports a range of popular AI frameworks, including TensorFlow, PyTorch, Caffe, Keras, and MXNet, so most algorithms will be pretty much plug-and-play. And there’s the usual brace of ports and interfaces, including USB-A and B, gigabit Ethernet, and support for microSD storage.

Nvidia says it hopes the Nano’s price point should open up AI hardware development to new users. “We expect a lot of the maker community that wants to get into AI, but has been unable to in the past, the Jetson Nano will allow them to do that,” Nvidia’s VP and GM of autonomous machines, Deepu Talla, told reporters at a briefing.

It’s certainly true that the Nano is competitively priced, though it’s not unique in that. Intel, for example, sells its Neural Compute Stick for $79, while Google recently unveiled two similar devices under its Coral brand: a $150 devkit and $75 USB accelerator. But if this shows anything, it’s that Nvidia is entering a fertile market. Let’s see what AI-powered creations start to grow.