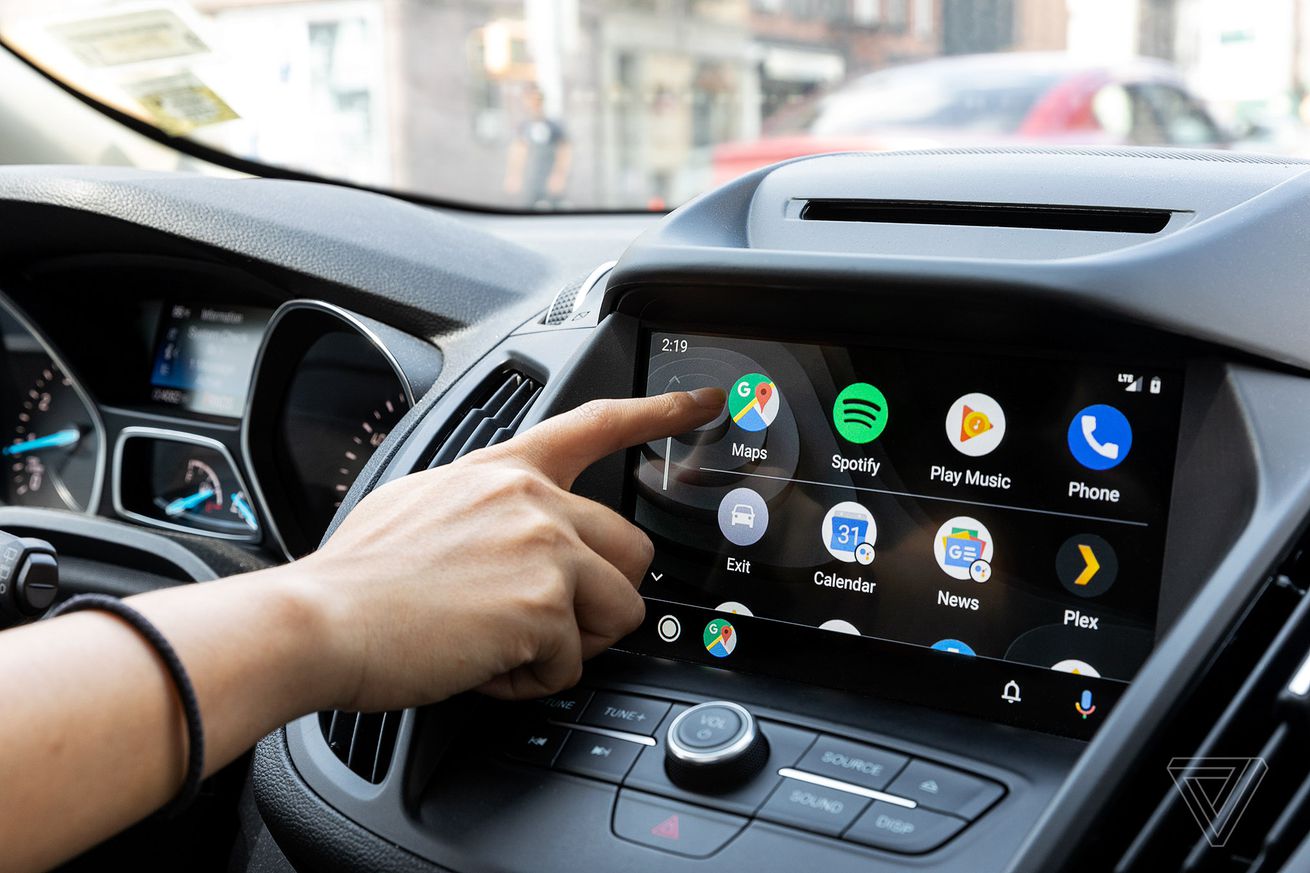 Five years after Android Auto launched, Google announced the platform’s first major refresh at Google I/O earlier this year. That refresh — which brings an updated layout, app launcher, a notification tab, new typeface, and dark mode by default — is starting to arrive on Android phones across the world this week. By and large, Android Auto looks and feels a lot more like your Android phone now, with big, colorful icons that better highlight all the things you can do rather than have you go hunting for apps under various tabs.

In the old version of Android Auto, there were small icons along the bottom navigation bar that split everything into categories: navigation, calls, home screen, music, and exit. Now, everything is condensed into the app launcher button on the left, a notification bell on the right, and a Google Assistant shortcut. It’s a much more intuitive way to use Android Auto, given all your compatible apps are laid out upfront on the app launcher.

However, not all of the icons work the way you think they would. While the icons for third-party apps like Spotify and Audible launch their respective apps, hitting Google News doesn’t bring up your news immediately, per se. Instead, Google apps like Calendar and Podcasts just bring up Google Assistant, which just ends up asking you to complete the task by voice.

This technically makes sense, given Android Auto is designed to make you physically touch the screen as little as possible. But in practice, this felt super redundant. It was annoying to find that although the icons for all your Google apps were there, most just routed you back to the Google Assistant. This overkill is marked by the permanent Google Assistant button on the right side of the bottom navigation bar since you could always have activated it by voice or through your steering wheel’s voice command button.

Among other UI changes, almost everything is bigger now except for the time, which is now hidden away in the upper left corner. I hate this placement. In my 2018 Ford Escape, the recessed screen means much of the left side of the display is typically blocked from the driver’s seat view. At the very minimum, I should be able to tell what time it is while I’m driving! And although the new left-aligned app launcher is supposed to make it easier to reach, it’s actually more difficult for cars that use this type of screen configuration. From where I’m sitting, I can’t even really see where I’m reaching, and straining to find that button when I should really be driving is definitely not the intended usage behavior.

While this new layout means that information can sometimes display awkwardly, thankfully incoming calls, text messages, and now playing bars are highlighted much more clearly against the dark background. You can see a summary of your notifications by tapping the bell icon — a huge improvement over the old home screen that listed way too many things in various information blocks. This section makes it easy for you to glance at a text when you’re stopped at a red light to see any messages you may have missed. It also just makes a lot more sense; previously this was mixed in on the home screen with the weather report and now playing, making it hard to glance at who was trying to get in touch with you and when.

Over on the main Google Maps view, everything looks largely the same. Plugging in your phone now brings up your Maps app first, with favorited addresses featured up front alongside live commute times. You can still choose to use other navigation apps, such as Waze. If a supported media app is being used, whether it’s YouTube Music or Plex, the icon will appear along the bottom for you to pause, rewind, or skip. The reverse is also true if you’re in the full-screen version of a music app; if you open an app while you’re navigating somewhere on Google Maps, the directions now stay at the bottom of the screen so you can view the album art or track progress for whatever you’re listening to without losing sight of what turns are coming up next. That now-playing screen is also a bit more info-dense than before, as you can see exactly how long a track has been playing and how much is left, which is great when listening to a podcast or audiobook.

Although these extra controls are useful, I wish you could hide the bottom navigation bar when it’s not in use to better see the map. Typically, I control music with the buttons on my steering wheel, so while having the controls up front was useful, I didn’t always want it on the screen.

You should note, by the way, that none of these UI changes will be coming to the mobile version of Android Auto. Instead, Google says it will release a separate update via the Google Assistant app that’s called Driving Mode.

While the new Android Auto looks and feels refreshed, I didn’t find the redesign to be that much more useful than the last iteration. Maybe I’d already gotten so used to relying on Android Auto through speaking and listening that I hardly ever tapped on the screen to find anything I needed anyway. Making the platform function more like a phone is helpful for people who might’ve never used something like it before, but eventually, you’re going to want to mostly use it primarily with voice so you can focus on the road.

What I wish Android Auto improved upon was its actual functionality. It still takes about five back-and-forths with Google Assistant to send a text message, and you still can’t choose a default media player from the app, even though you can choose a default navigation app. (You have to go through the main Google Assistant settings instead. Thanks, Michael Beganny!) Shortening the number of taps to get somewhere on Android Auto is nice, but shortening the number of voice prompts until an action is done would be a lot more useful.

As more car manufacturers adopt Android Auto compatibility, I’m hoping that Google will start updating the platform on a more frequent cadence. The new Android Auto is starting to feel like a more fluid transition when you jump from your phone to your car. But please don’t make us wait another five years for the next major update.