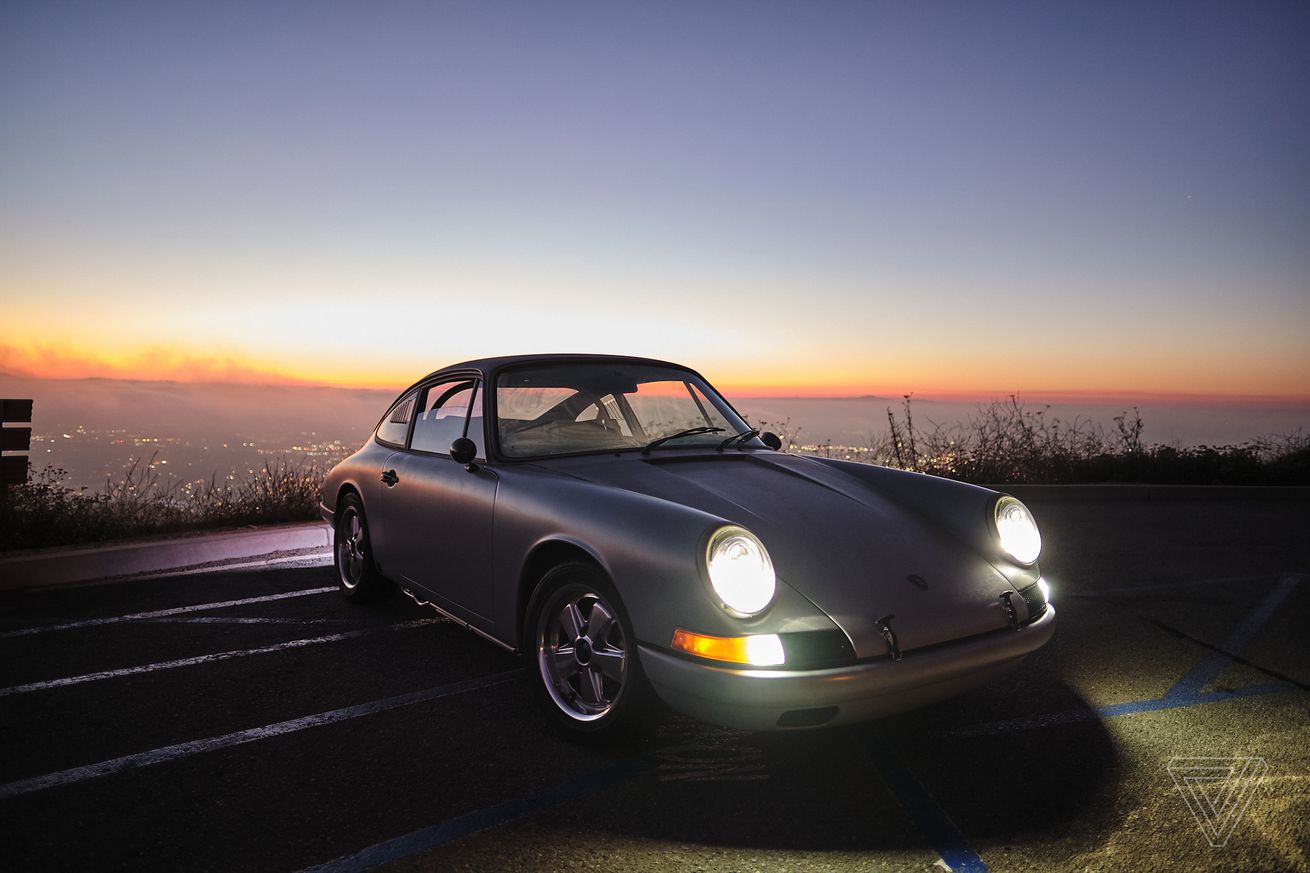 There are some half a million Teslas in the world right now, and some of them have met unfortunate endings. But as people like YouTuber Rich Rebuilds have shown, one Tesla owner’s loss can easily become another’s gain. Just take the resurrected 1968 Porsche 912 featured in the video above, which is, once again, doing smoky burnouts, thanks to the motor from a Tesla Model S P85.

A few years ago, The Verge traveled to Southern California to talk to a man named David Bernardo, whose company, Zelectric Motors, was refurbishing old Volkswagen Beetles and Microbuses and retrofitting them with electric powertrains. Since then, the trend has really started to take off, and Zelectric — along with its companion performance shop, EV West — now has a waiting list measured in years, full of customers waiting to plunk down up to (and sometimes more than) $100,000 for a car.

The idea of mating new EV technology with vintage cars has grown so popular that even the automakers are trying to tap nostalgia to promote their electric road maps. Some have called on classic designs for their future-facing all-electric concept cars. Aston Martin announced that it would convert old cars for owners who wanted to dodge impending pollution rules in major cities. Jaguar made a limited run of electric E-Types, and Prince Harry even drove one to his wedding.

This boom means Bernardo and EV West founder Michael Bream are able to take on more complicated and expensive projects, like the new 1968 Porsche 912. They’ve taken what was once a somewhat rusty shell from an owner in Las Vegas and turned it into a 550-horsepower electric monster with 4,500 pound-feet of torque. Not bad for a car which was less powerful than its predecessor during that era, earning it the moniker of the “budget” or “poor man’s” 911.

The Porsche uses the Tesla’s electric motor, inverter, rear differential, and even the throttle pedal. But it doesn’t use the Model S’s battery. Instead, the little Porsche is powered by a smaller 32kWh pack from LG Chem, which has been split into two 16kWh portions to help balance the weight of the car. Still, Bream says the car gets around 140 miles of range.

“[It was] a little bit of a challenge, engineering-wise, because the car is much smaller than the cars that we’re pulling the components out of. A Tesla drive unit comes out of a 5,500-pound car, and we’re trying to shoehorn into about a 2,300-pound car,” Bream says. “So there’s a lot of engineering challenges there.”

The Tesla-powered 912 will also lay the groundwork for future builds. EV West plans to sell a 912 conversion kit for roughly $50,000 based on the work that’s being done with this project — meaning people with some knowledge, access to an old 912, and lots of disposable income will be able to skip the waiting list and do the work themselves.

Not everyone loves what people like Bream and Bernardo are doing. Leslie Kendall, the chief historian of the Petersen Automotive Museum in Los Angeles, says some vintage car purists aren’t especially fond of the idea. “They look at it and consider it — and many have a point — a desecration of whatever vehicle it is. Because you’re taking a vehicle they’re not making anymore, and you’re turning it into something it’s not and was never meant to be,” he says. “The whole idea of getting a classic car is getting an authentic motoring experience. And part of that authentic motoring experience is the rev of the engine.”

Some purists consider it a “desecration”

Kendall isn’t a total prescriptivist when it comes to restoring vintage cars, though. “Once it’s your car, you can do anything you want to it,” he says. “If you’ve got a really rare car, like a Porsche 901, one of the pre-911 Porsches, and you want to convert it to an electric car, it’s yours. You certainly can do that.” But, Kendall says, that would still “diminish” the hobby by “taking something very rare, something very important, and modifying it, likely to the state that it would be very difficult to return to its original configuration.”

For owners like Paul Stone, who bought a converted 1966 Volkswagen Beetle from Zelectric a few years ago, the modernist twist was what sold him.

“I had very low expectations because the electrified VWs I’d see online were just Frankenstein’s monsters,” Stone says. “They [were] filled with golf cart batteries in the back seat and strange motors. They really were bad, so I assumed it was going to be like that.” But once Stone got behind the wheel, he says he was “blown away.”

“The first time I drove it, [I] got out on to the street and really stepped on the accelerator... it was fast and fun,” he says. “In first gear, it’ll throw you into the backseat.”

Stone’s encountered some resistance when he’s brought his Beetle to car shows or meet-ups, but he says it’s rare. “People who are attracted to the car ... they’re not interested in a large V8 gas-guzzling classic car that’s been restored,” he says. “This has kind of opened it up to another generation. I think this is going to be the future of car collecting.”

Bernardo and Bream say they try to construct the cars so it’s possible to convert them back, though they don’t really expect that to happen.

But Kendall’s comments illustrate a larger point: of course some of the people who have spent decades, maybe even most of their lives, finding, restoring, collecting, tuning, and showing off vintage cars aren’t going to like what shops like Zelectric and EV West are doing.

There’s been similar resistance in other places where electric cars are showing up. Formula E, the first global all-electric racing series, has had to work extra hard to prove itself (and spend a lot of money in the process) over its first five seasons. And while EV sales are slowly ticking up around the world, consumers in the US are buying more gas-guzzling SUVs and trucks in the near term.

The electric car revolution is not a shift that will happen overnight. But with projects like the Tesla-powered Porsche, shops like EV West and Zelectric Motors are showing that car culture is starting to adapt to this new reality — and they have the waiting list to prove it.