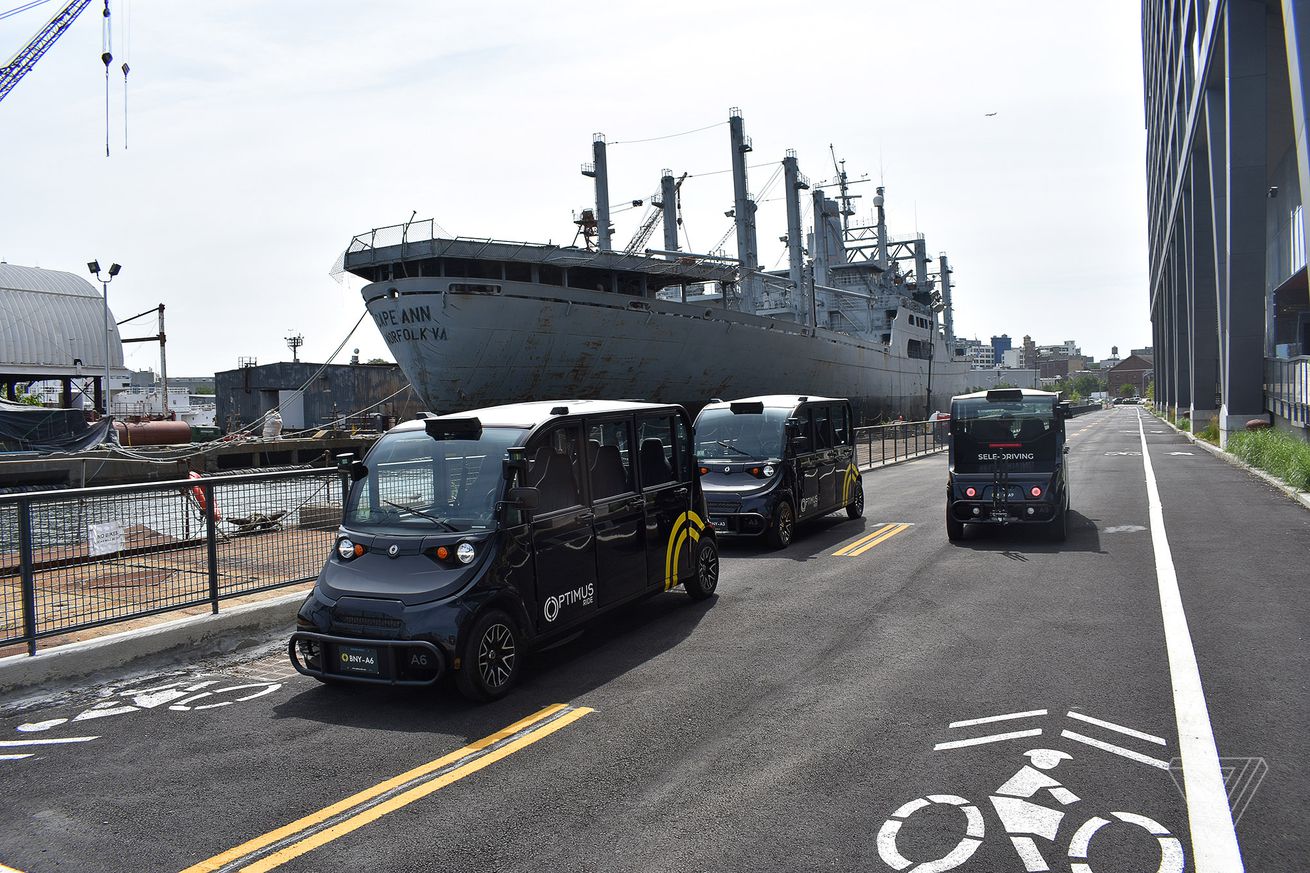 New Yorkers pride themselves on having seen it all, but if there’s one thing they have yet to set their grime-coated eyeballs on, it’s hoards of self-driving cars roaming their streets. For better or worse, New York City has remained AV-free, thanks to ambivalent lawmakers, a subway crisis that has sucked up most of the oxygen, and some fairly restrictive regulations on the books. But that will start to change on August 7th when the city’s first autonomous shuttle service opens its doors to the public in Brooklyn.

The service, which is run by an MIT spinoff called Optimus Ride, consists of a half-dozen six-seater electric vehicles operating within a 300-acre walled-off industrial space called the Brooklyn Navy Yard. Much like other autonomous vehicle (AV) shuttle services that have cropped up in recent years across the country, it is extremely slow and restricted only to a single route: 1.1 miles from the entrance of the Navy Yard to the New York City Ferry dock on the East River. The service will operate on a continuous loop between 7AM and 10:30PM on weekdays.

Each car has two safety drivers: one behind the wheel and one in the passenger seat monitoring the vehicle’s sensors from a laptop. Engineers at Optimus Ride’s offices in Boston will be monitoring the vehicles when they eventually go fully driverless, ready to issue commands if anything goes awry.

“At a macro level, autonomy here in New York City is a beacon for the rest of the world.”

“At a macro level, autonomy here in New York City is a beacon for the rest of the world,” Ryan Chin, CEO of Optimus Ride, told me recently. “The prime minister of Japan can come here, go to the Navy Yard, and see our system. The mayor of London can come here, and do that. You can imagine the whole world coming here very easily.”

In that sense, Chin couldn’t have chosen a better place to stage his experiment than the Brooklyn Navy Yard. We were sitting in a conference room in the sprawling New Lab, one of several high-tech hubs to appear within the World War II-era munitions factory in recent years. The Navy Yard is in the midst of a high-tech reinvention that has seen the addition of hundreds of workers and tens of thousands of square feet of new office and light manufacturing space. Nearly 10,000 people work at the Navy Yard today, a number that administrators expect to double in the near future.

Another key feature of the Navy Yard is that it’s private property, which allows Optimus Ride to avoid the chaos and unpredictability of public streets. The company was also able to avoid having to seek permission from the state Department of Motor Vehicle to launch its service. The New York State Legislature passed a bill in 2017, requiring operators to obtain permission from the DMV to demo and test autonomous vehicles on public roads.

Optimus Ride, which also operates vehicles in Boston, California, and Northern Virginia, is billing the Navy Yard deployment as the “first commercial self-driving vehicle deployment in the state of New York.” But there have been a handful of demonstrations of autonomous technology. Audi completed a six-mile demo around the state’s capital in June 2017 after receiving approval from the DMV. Later that year, Cadillac performed a “hands-free” drive from its headquarters in New York City to New Jersey.

New York has been a ghost town for serious AV testing

But New York has been a ghost town for serious AV testing. Part of the reason could be the state’s strict requirements, which include a state police escort at all times to be paid for by the testing company. In 2017, GM announced plans to test its self-driving vehicles in lower Manhattan, but those plans have since dried up with little explanation as to why. New York’s elected officials have largely ignored the self-driving phenomenon, instead focusing their attention on the dire state of the city’s subway system. Meanwhile, operators flocked to places with friendlier regulations (like Arizona) or ones that are more convenient to their headquarters (like California).

Optimus Ride’s vehicles aren’t authorized to leave the Navy Yard. That’s fine with Chin, who sees this initial deployment as crucial to his plans to refine the technology, as well as assuage a jittery public that’s largely skeptical of self-driving cars. For Optimus Ride, the fastest path to mass adoption of the technology is, ironically, slower-than-normal speeds.

“I think, over time, we can increase the complexity and move beyond just the geofenced area,” Chin said. “That’s certainly plausible, [but] it’s not something near term ... doing that is going to be really tough.”

That said, Chin says he expects to pull the two safety drivers out of the vehicles by 2020 — safety permitting. That’s a bold statement considering even the most advanced autonomous vehicles in the world only operate without safety drivers under extremely limited, highly controlled circumstances. Most companies are resigned to keeping safety drivers behind the wheel for the near future, realizing any rush to pull them out may expose passengers or pedestrians to safety risk — and the companies themselves to expensive lawsuits.

If that makes David Ehrenberg, president and CEO of the Brooklyn Navy Yard, nervous, he doesn’t show it. Like Chin, Ehrenberg said he’s happy to take things nice and slow. “I think we will hopefully get to that decision point in the not-so-distant future,” Ehrenberg told me. “But right now, we’re not far along enough, frankly, to say, ‘Oh, we feel great’ or ‘We feel terrible’ about driverless cars.’”

The cars themselves are fully electric with three LIDAR sensors (two in the front and one in back) as well as eight cameras installed around the vehicle. The interior is spartan but comfortable. There are no creature comforts, nor any fancy add-ons like touchscreens. The whole vehicle has a utilitarian feel that’s similar to an ATV or a snowmobile, which makes sense because it’s manufactured by Polaris, a Minnesota-based company that makes ATVs and snowmobiles.

The ride from the entrance of the Navy Yard to the ferry dock was short and uneventful, which is typical of self-driving vehicles operating under the most tightly controlled conditions. While a safety driver named Mitch had his hands hovering just below the steering wheel, the vehicle puttered along at about 15 mph, yielding for pedestrians, keeping to its lane, and making one unprotected left turn — a common maneuver that nonetheless has proven to be complicated for most autonomous vehicles.

These types of modest deployments are likely to become more common, especially as the big companies that are spending billions of dollars to build and operate self-driving cars are forced to rein in expectations about their readiness. Optimus Ride calls to mind similar services that are available from startups like Voyage in retirement communities in California and Florida, or Drive.ai in Frisco, Texas: mostly low-speed autonomous vehicles in tightly controlled, geofenced areas with an operations team in constant communication with the cars.

These vehicles — small, usually electric, with capacity for no more than a dozen people — have proliferated in cities around the world. Experts see them as a good entry point for autonomous vehicle technology, while regulators like keeping the vehicles out of more populated areas.

But that kind of small-scale business can also be extremely difficult to get right. Drive.ai nearly went out of business before it got bought by Apple. And Navya, a major autonomous shuttle manufacturer based in France, recently announced that it would be pivoting away from the shuttle business in favor of licensing its software to third-party clients.

Optimus Ride isn’t concerned with making money — at least not yet. The company raised $18 million in its first round of fundraising, and it’s currently in the middle of its second round. It offers its rides for free, and while it has a contract with the Navy Yard for an undisclosed sum, Chin says he’s focused more on perfecting the technology so the company can be well-positioned to make money when the time is right.

“It’s a tough business. And the reason is that doing self-driving vehicles is super hard,” Chin said. “If you get to really robust autonomy, then what you do have is the ability to get to those types of more optimal vehicle-passenger sizes. And I think the challenge that a lot of companies are having is starting with the vehicle first, as opposed to figuring out how to do autonomous vehicles really well.”

Photography by Andrew Hawkins / The Verge