'They came in with guns': Fortnite world champion Bugha 'swatted' during livestream 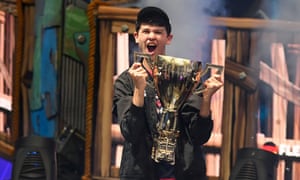 Barely two weeks after winning $3m at the Fortnite World Cup, Kyle “Bugha” Giersdorf was “swatted” in the middle of a livestreaming session.

The 16-year-old was broadcasting to his legion of fans on streaming platform Twitch as he played Fortnite with friends when the incident occurred. Swatting involves a hoax call to the police in the hope of armed officers descending on someone’s home. The practice has led to the death of at least one person in recent years: in 2017 Andrew Finch was shot and killed by armed police responding to a fake hostage report at his home. A Los Angeles man was later sentenced to 20 years in prison for the hoax call.