Netflix’s Dark Crystal: Age of Resistance builds on everything that made the film great 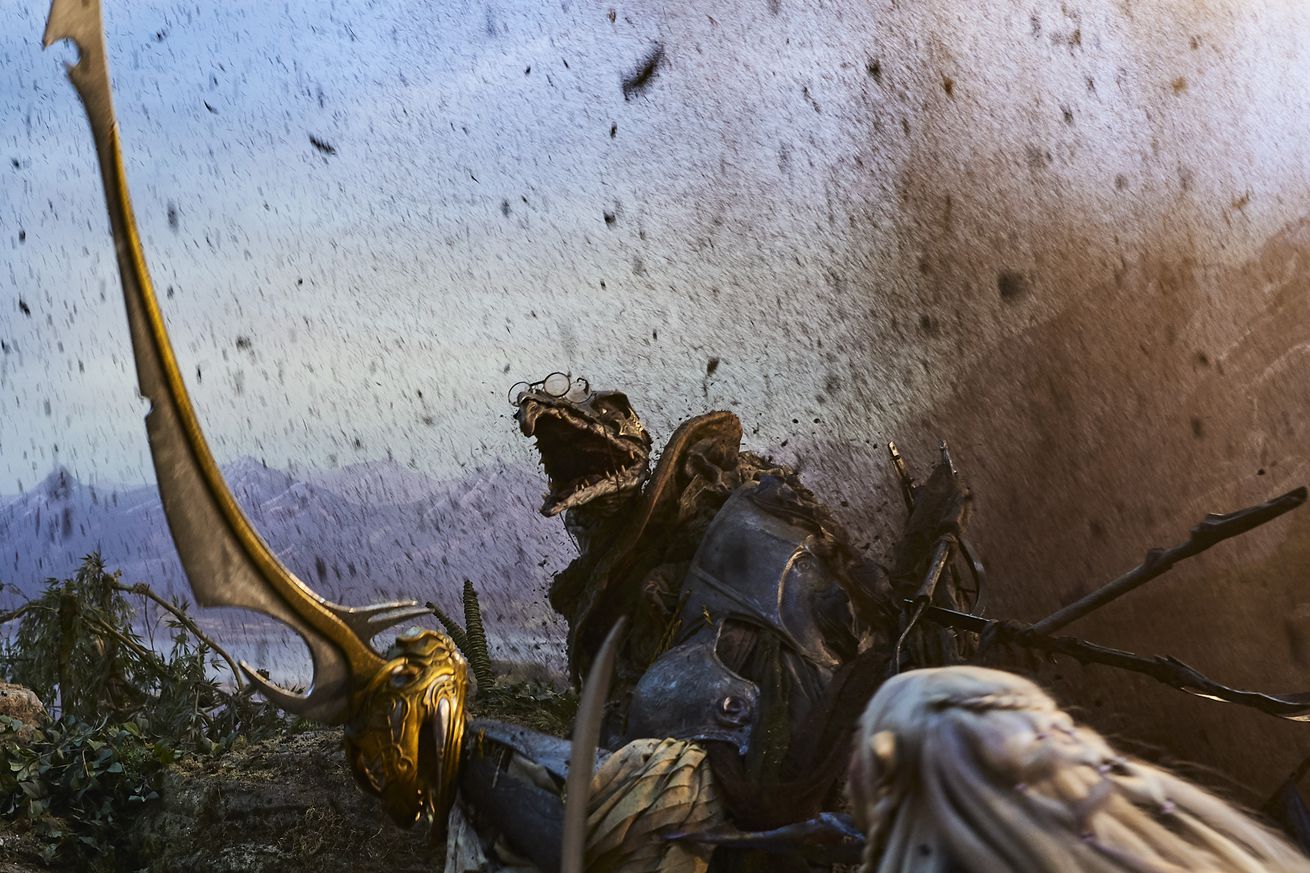 In 1982, Jim Henson and Frank Oz redefined fantasy filmmaking with The Dark Crystal, an ambitious, puppet-driven movie that tells a wondrous story about an ancient world on the brink of destruction or salvation. In the post-Game of Thrones fantasy licensing frenzy, it would have been easy for Netflix to snap up the rights to the Dark Crystal world, make a cheap knockoff, and count on nostalgia to lure viewers. Instead, Clash of the Titans and The Incredible Hulk director Louis Leterrier has produced a true labor of love. The series The Dark Crystal: Age of Resistance builds on everything that made the film great, and it has the potential to become a classic in its own right.

The Dark Crystal, set on the dying world of Thra, followed two Gelflings — the last survivors of a small, elfin race — on a quest to restore a crystal power source that was corrupted by a malevolent birdlike race known as the Skeksis. Age of Resistance, which releases its 10-episode first season on August 30th, is set before those events. The Gelflings are a thriving society of disparate clans loyal to the Skeksis, but are stirred to action when they learn that the Lords of the Crystal are killing Gelflings to extend their own lives.

While the show uses much of the world-building and some of the plot points from J.M. Lee’s prequel novels, the show has its own protagonists and structure. The story beats will still feel familiar, given how closely they follow the Lord of the Rings formula. To defeat a terrible evil, reluctant heroes must put aside their differences and band together, find unlikely allies, gather lost lore and weapons, and overcome betrayal. The similarities are particularly strong given that the Gelflings’ short stature and love of music makes them feel distinctly hobbit-like.

The heroes seem unfortunately bland because of the fidelity Jim Henson’s Creature Shop paid to the original puppets and their largely unexpressive faces. While the designers strove to distinguish them with a wide variety of complexions, clothing, and hairstyles befitting their clans and status, the characters feel indistinct in the early episodes. The Skeksis General skekUng (Benedict Wong of Doctor Strange) lampshades the issue by complaining that he can’t tell the show’s three Gelfling princesses apart.

While most of the characters eventually come into their own, the Gelfling warrior Rian (voiced by Taron Egerton of Rocketman and the Kingsman series) never really gains any defining personality traits besides being brave and good with a sword. His genericness makes the moments when he’s supposed to be inspiring his people fall flat. Far more nuanced are the scholarly princess Brea (Anya Taylor-Joy) and Deet (Nathalie Emmanuel of Game of Thrones), who leaves her underground home at a tree’s behest to spread word of a pending ecological disaster.

Still, the first season’s best hero isn’t a Gelfling, but a Podling, a member of an even more diminutive race that the Skeksis use as servants. The aspiring Podling paladin Hup (Victor Yerrid) is only barely capable of communicating with his traveling companions, but he gets by with a heavy dose of expressive charm and by blowing loud raspberries whenever he’s displeased.

Any distinctive qualities the heroes lack is more than made up for by the show’s villains. Leterrier has assembled an incredible cast to play the Skeksis, who alternate between hatching monstrous schemes, bickering with each other, and luxuriating in the pleasures their rule has bought them. Simon Pegg voices the manipulative skekSil the Chamberlain so well that his portrayal is practically indistinguishable from Barry Dennen’s version in the original film. That’s no small feat, considering how much of the character is built on distinctive vocal tics and a sing-song tone that manages to be both comical and ominous.

Mark Hamill’s voice for sketTek the Scientist is just a few steps removed from the one he’s used for various iterations of Batman’s nemesis the Joker. (The similarity is particularly clear in sketTek’s frequent bursts of maniacal laughter.) Andy Samberg absolutely steals an entire episode as a Skeksis heretic who shares the secret history of the world with the Gelflings through a mix of opera and puppetry, and Jason Isaacs brings the dark gravitas he showed as Lucius Malfoy in the Harry Potter films to the Emperor skekSo. The writers spend plenty of time showing how a profound fear of death leads the Skeksis to commit an escalating series of horrors, and not a moment of that time feels dull or wasted.

The original Dark Crystal film has stood the test of time so well thanks to its puppets and practical effects, which still look distinctive and well-crafted more than 30 years later. Age of Resistance is committed to maintaining that legacy by minimizing CGI in favor of puppets and animatronics. The detail is absolutely incredible, from the grotesque Skeksis to the menagerie of strange critters that make Thra feel as fully realized as Pandora from Avatar.

Every episode brings some new visual wonder, like a giant manta-ray-esque creature ridden by a desert-dwelling tribe of Gelflings, a swarm of giant arachnids that assemble themselves into a mouth to speak to the Skeksis, or the carriages the Skeksis ride around Thra, which are controlled by giant pill bugs rolled into wheels.

The constant cavalcade of cute animals and goofy characters is sure to delight kids, but parents eager to share their fond memories of The Dark Crystal should be prepared for just how dark Age of Resistance gets. Like any epic fantasy, it’s filled with noble sacrifices and tragic deaths, and the writers don’t pull any punches when it comes to showing the Skeksis brutally torturing and murdering characters. The show is in many ways tonally similar to the 1984 fantasy film The NeverEnding Story, and it’s likely to traumatize as many children as it delights.

The film established a world that was strange and mysterious, but it barely skimmed the surface of its potential in its 90-minute runtime. The Age of Resistance writers are filling that blank space in a way that feels natural rather than superfluous. They’ve invented past conflicts, expanded the roles of characters from the film, and built a nuanced social order for the Gelflings that helps explain how the Skeksis came to power and maintained their grasp on Thra for a thousand years. The writers have also created numerous minor touches that add to the character of the world, like beautiful, somber rituals for the choosing of a new Gelfling leader, and a way of mourning that still embraces the show’s central philosophy that death is a necessary, important part of life.

One of the most remarkable feats of building on the source material comes from the show’s use of dreamfasting, a Gelfling ability to share memories through touch. In The Dark Crystal, it was used to quickly share backstories in a visual way, and to build fast intimacy. Age of Resistance expands considerably on the idea, exploring the ways dreamfasting would affect society, from letting couples relive their favorite moments together to a leap of faith that allows strangers to move past possible social deceptions. So much thought went into the ability that the writers even had the Chamberlain show his cleverness by coming up with a way to undermine the power.

All this world-building has the potential to feel terribly depressing for film viewers who already know the fate in store for the Gelfling people. But one of the series’ many clever twists makes it clear that Age of Resistance isn’t a typical prequel, and that the writers aren’t entirely bound by the film’s events. It’s just another sign that the series’ creators understand why viewers would want to return to Thra and know just how to keep them there. Given that the season ends with multiple cliffhangers, it’s clear that the creators hope to continue the show with that knowledge in mind, further developing the characters and the film’s wondrous world.

In the US, the 10-episode first season of The Dark Crystal: Age of Resistance debuts on Netflix on August 30th, 2019. Release dates may vary in other countries.