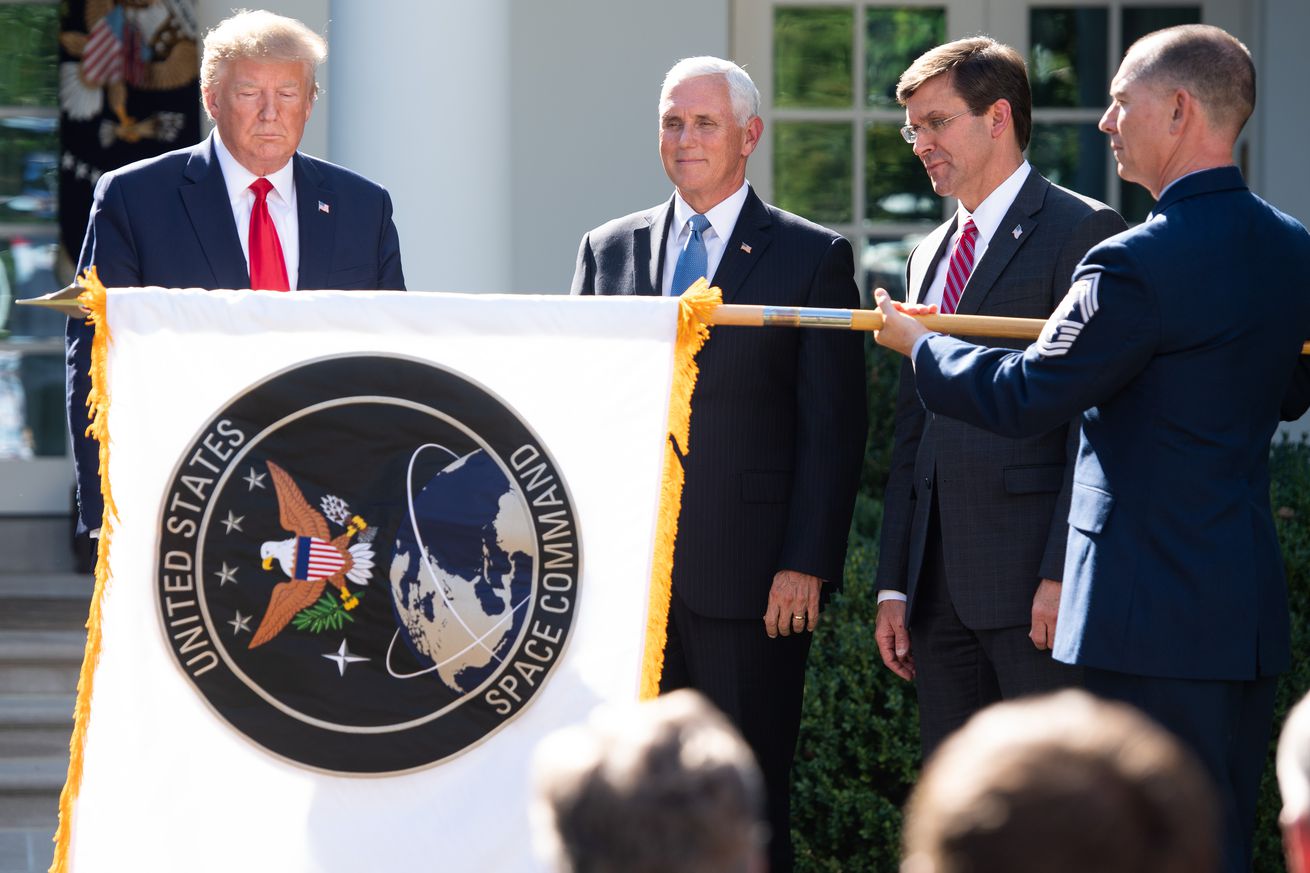 The new flag for US Space Command is unveiled during a ceremony with President Trump | Credit: SAUL LOEB/AFP/Getty Images

Today, the Trump administration stood up a new unified combatant command within the military that will be entirely focused on space. Aptly named the US Space Command, the organization will be run by a four-star general, and it will be responsible for setting the US’s military agenda and doctrine for space in the years to come.

“As the newest combatant command SPACECOM will defend America’s vital interests in space — the next warfighting domain,” President Donald Trump said today at a ceremony standing up Space Command. “And I think that’s pretty obvious to everybody. It’s all about space.” Following Trump’s speech about the merits of Space Command, Secretary of Defense Mark Esper signed documents that formally established the organization. A new flag for the command was also unveiled at the ceremony.

In reality, the US Space Command isn’t actually new. The military once had a Space Command, established back in 1985 after there was a push to focus on space warfighting. It operated for nearly 20 years, but after the September 11th terror attacks, the US wanted to focus more on warfighting in North America. As a result, Space Command got tucked into US Strategic Command (USSTRATCOM), which is focused on nuclear deterrence. Since then, the military’s space strategy has come out of that combatant command from the Joint Force Space Component Command (JFSCC). But from today onward, the national security space agenda will be decided by a standalone group.

Space Command is a different entity from Trump’s proposed Space Force. If the Space Force becomes a thing, it’ll be focused on organizing, training, and equipping, or OTE. That means figuring out what kind of space assets need to be made — such as satellites for surveillance, communication, navigation, and more — building those satellites, and then training people to operate them. A combatant command, on the other hand, is focused on higher-level warfighting. For space, that entails figuring out how to integrate the use of these satellites into the Department of Defense’s missions. “All of the combatant commands have all their own war plans,” Brian Weeden, director of program planning for the Secure World Foundation, an organization that promotes sustainable space solutions, tells The Verge. “How does space fit into those? Space Command is now going to be helping with that.”

The other big responsibility of the Space Command is to come up with the military’s playbook for space-related scenarios. “The biggest thing that a combatant command does is it thinks about all the bad things that could happen in its area of control,” says Weeden. “And then they put together a plan for how to respond to all of those bad things that can happen.” For instance, if some foreign adversary were to, say, hack a US surveillance satellite, the Space Command would have a detailed checklist for how to respond to such an event. And they would figure out a protocol for who is in charge of handling the situation.

“what it does is it creates the conditions for things to change in the future.”

Very little is actually changing, though, except for some bureaucratic reshuffling. The organization is still being run by the same person — Gen. John Raymond — except now he doesn’t need to report to the leader of USSTRATCOM. Much of the same personnel who were working on space warfighting within USSTRATCOM are going to be doing the same for US Space Command, too. And while the location of the command’s headquarters has yet to be decided, the two main components of Space Command will be organizations that are already in operation: the Combined Space Operation Center (CSpOC) at Vandenberg Air Force Base, and the National Space Defense Center (NSDC), in Colorado Springs. CSpOC is in charge of enhancing the nation’s space capabilities as well as coordinating the space agenda between the US, international partners, and commercial enterprises. The NSDC is responsible for identifying and warning against threats to the US’s space assets.

For now, it’s unclear how this resurrection of a separate Space Command will change things. But the fact that space warfighting will be decided by a fully independent organization may mean a sharper focus on national security space issues, says Weeden. “It’s not actually that different,” he says. “I would say what it does is it creates the conditions for things to change in the future.”

In the meantime, the future of the Space Force has yet to be decided. Ultimately, the decision is now in the hands of Congress, which will decide whether to stand up the new military branch and how much money it will receive if so. That decision may come once Congress decides on the next National Defense Authorization Act for 2020.

For now, the newly minted Space Command will be in full swing, starting today. “Just as we have recognized land, air, sea, and cyber as vital warfighting domains, we will now treat space as an independent region, overseen by a new unified geographic combatant command,” said Trump.