Every iPad wants to be a Surface now 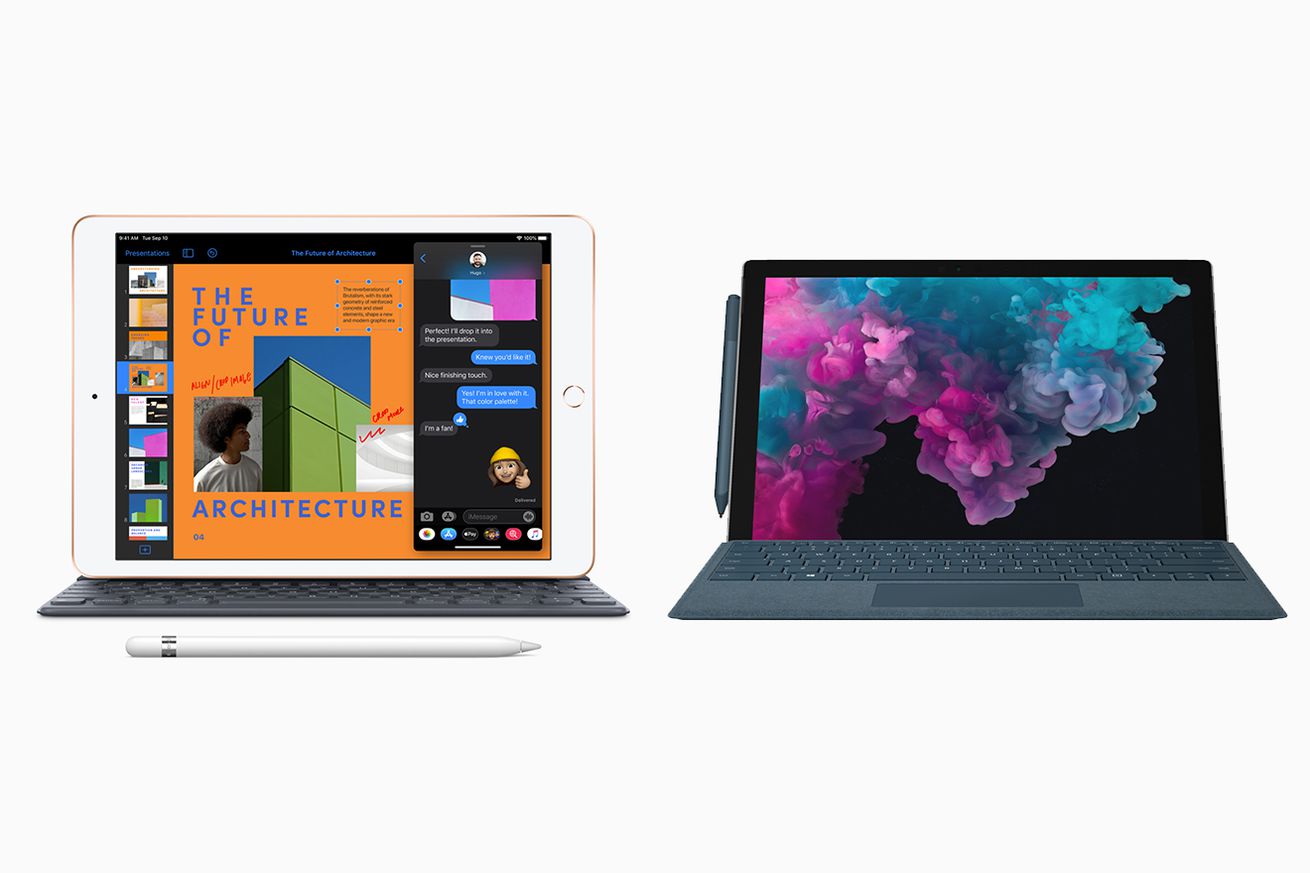 “Netbooks aren’t better at anything,” joked Steve Jobs when he stood on stage nearly 10 years ago to introduce the first iPad. Apple’s original vision for its tablet was for a new category of device that was focused on browsing, email, photos, video, music, games, and ebooks. “If there’s going to be a third category of device it’s going to have to be better at these kinds of tasks than a laptop or a smartphone, otherwise it has no reason for being,” said Jobs.

It wasn’t a giant iPhone, nor was it a full laptop replacement. The iPad has always been something in-between for nearly a decade, but now every iPad wants to be a Surface.

The iPad made netbooks look like a cheap laptops, and it initially soared in popularity as rivals attempted to catch up and offer cheaper tablets to the masses. Microsoft even famously went all in with Apple’s vision of touch-friendly computing, and went a little too far with Windows 8. But what the iPad did provide was a reason for the Surface line to be created. Microsoft’s Surface devices have always included optional keyboards that attach to transform the tablet into more of a laptop. Now the entire iPad lineup, with the exception of the mini, looks a lot more Surface-like than iPad thanks to its native keyboard and Pencil support.

Apple introduced a new 10.2-inch iPad on Tuesday, designed to be the cheapest (aka, default) iPad that consumers will purchase. At just $329, the new seventh-generation iPad is compatible with the full-sized Smart Keyboard and the first-generation Apple Pencil. These changes mean the iPad Pro, iPad Air, and iPad all support the Smart Keyboard for the first time. Apple first introduced its iPad keyboards with the iPad Pro back in 2015, and now they’ve made their way through the iPad lineup. The iPad Mini is the noticeable exception, but a Smart Keyboard at that size probably wouldn’t work all that well.

The change is significant in the way the iPad is positioned. You’ve had to opt for third-party keyboards on the base iPad for nearly 10 years, and now Apple wants every iPad to work with a keyboard out of the box. Microsoft clearly saw the keyboard opportunity for the iPad early, and the Surface was born out of the option to function as either a laptop or tablet.

While most Surface owners will purchase the optional keyboard because Windows is primarily an OS designed for traditional computing, it’s fair to say that most iPad owners probably don’t own a keyboard. Apple’s latest iPad might not be enough to change that overnight, but it certainly positions the tablet closer to Chromebooks and lower priced Windows laptops, even when you factor in the $160 price point for the Smart Keyboard that will bring the base iPad cost closer to $500.

Apple even briefly compared its new iPad to the top-selling Windows laptop on stage yesterday, clearly identifying the iPad’s target audience in the face of withering Android tablet competition. If you’re considering a laptop or a tablet, a $500 iPad (with keyboard) that tries to do both certainly puts the pressure on Microsoft’s Surface Go. Apple’s entire 10.2-inch iPad site is also dedicated to its benefits over a computer.

Like Chrome OS, Apple’s iPadOS is designed to be simple and secure while running modern apps. Those are key advantages over cheaper Windows-powered laptops that run legacy desktop apps. But if you’re used to the freedom and power of desktop computing, iPad apps can be a disadvantage as they are still touch-only and relatively limited. Still, Apple has slowly been trying to convince everyone that the iPad Pro is a computer thanks to its keyboard support and the ever-changing nature of work and productivity. It’s far easier to get work done on an iPad now, thanks to the many always-connected mobile apps built for the iPhone era.

Coupled with some of the bigger changes in iPadOS coming later this month, it’s clear the iPad is increasingly moving towards more laptop-like tasks than ever before. There’s even mouse support for the iPad, although it’s limited at the moment. Now that every big iPad supports a keyboard we’re a step closer to seeing exactly where Apple will take this device in the future. The software that powers the iPad is steadily moving away from its smartphone roots, and now the hardware is offering iPad fans a way to transform the device into something beyond a tablet.

Microsoft and Apple are at the front of the race to offer tablets that combine laptop tasks. Apple is catching up on the laptop-like side, and Microsoft still has a long way to go to address the tablet experience. Apple’s strength is the touch-friendly apps and simplified OS that exists for the iPad, and Microsoft’s is the three decades of traditional computing experience that has gone into Windows.

The search for the perfect 2-in-1 device has been going on for nearly 10 years. Now it seems within reach. We’ll be watching closely to see how initiatives like iPadOS, Windows Lite, and maybe even Chrome OS bridge the gap between the tablet and PC. One of these, or a combination of approaches, will ultimately address the needs of the majority.