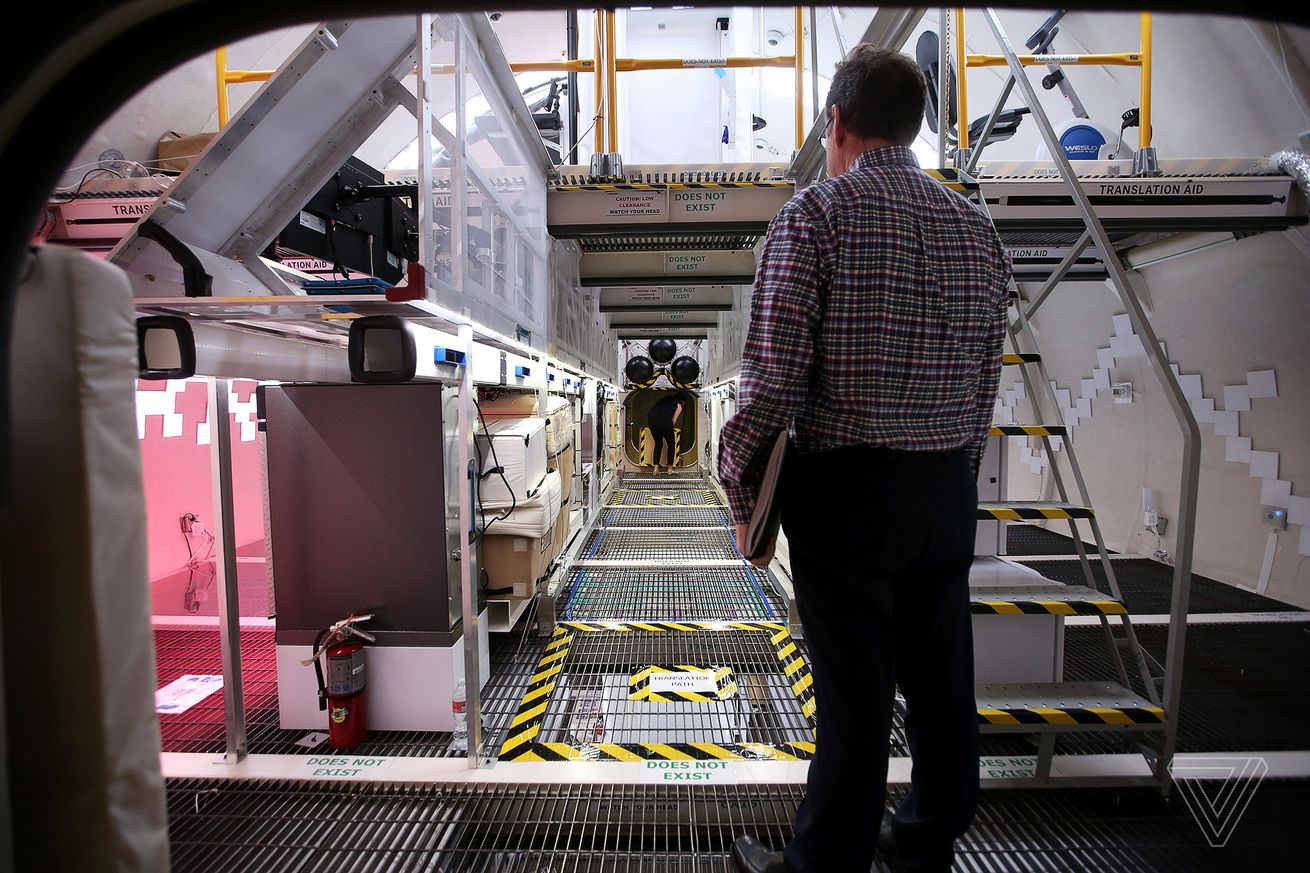 Welcome to your new home, the B330

Standing on a metal platform labeled “Does not exist” in the middle of an inflatable bouncy house designed for space, I had one question: where’s the bathroom? The mockup of Bigelow Aerospace’s flagship space habitat module, the B330, was packed with features, but I wanted to know more about how future astronaut visitors to this proposed space station would deal with the grosser parts of being human.

Bigelow officials were very pleased to point out that the B330 has not one, but two toilets. “The fact that there is two is very unusual because usually there’s only one,” Colm Kelleher, the deputy program manager for the B330’s life support systems, said. “And there have been problems when the toilet breaks down.” Each of these new, state-of-the-art toilets consisted of a bucket housed inside a square tent equipped with its own suction hose, along with gloves and a mysterious bag labeled “waste.” Similar tents were designated for “showering” or at least scrubbing down with cloths and sanitized napkins. Various sleeping bags adorned the walls where people are meant to catch some shut-eye while strapped into their quarters. Each one sported a tiny alien logo as a nod to billionaire CEO Robert Bigelow’s fascination with the search for UFOs.

“There have been problems when the toilet breaks down.”

The entire model was situated in one of the company’s cavernous buildings in Las Vegas where Bigelow was busy pitching his expandable habitat to reporters like me. Earlier, flanked by the giant inflatable space habitat, Bigelow told reporters that he supported NASA’s plan for a lunar space station. And if the massive prototype to his left wasn’t a huge clue about his ambitions, he also wanted us to know that his company, Bigelow Aerospace, is eager to help build it.

“Number one, we want to be part of Gateway,” he told us, referring to the name of the future lunar station.

The habitat is designed to be a giant, space-faring industrial-strength balloon. It will ride into space shriveled up and compact so it can fit on top of relatively skinny rockets. Once it’s free of Earth’s atmosphere, the B330 can expand outward, creating a cavernous room in its belly to accommodate visiting astronauts.

The B330 could sustain four people indefinitely, according to Bigelow, and it could work just about anywhere — in orbit or deep space. But one particular location is on Bigelow’s mind: “The Moon is the main target at the moment,” he said.

“The Moon is the main target at the moment.”

NASA is in a race against itself to get humans back to the surface of the Moon by 2024, and the Gateway is a critical part of the space agency’s plans. Envisioned as a scaled-down version of the International Space Station, the Gateway will be a place for future astronauts to visit before climbing into a lander and heading down to the Moon’s surface.

To meet this ambitious 2024 goal, NASA wants to build the tiniest possible Gateway with two main pieces: a small tin can where astronauts can transfer from their spacecraft to a lander, and a power module to keep the lights and life support systems turned on. “It won’t keep anybody alive by itself,” Bigelow said of this “skinny” Gateway. “There’s not that capacity at all.” But eventually, NASA wants to build out the Gateway more substantially — and that’s where Bigelow could potentially come in. The agency is going to attach a much larger habitat where astronauts can work, relax, eat, and sleep. And the B330 could do the job.

A sleeping bag for a future crew member.

In Las Vegas, one of the two mockups available for us to explore offered an open view of the interior of the B330, as if it didn’t have any outer walls. Various mannequins had been positioned around the guts of the spacecraft to show where astronauts might float on a typical day in the hab. To me, the place seemed cramped, but I quickly learned that this was the equivalent of an open loft floor plan for space. Just one B330, when expanded, would provide half of the usable volume of the International Space Station.

“If you’re launching a metal can, you just don’t have that volume advantage,” Kelleher told me. “You have what you have at launch. With this technology, you have a multiplier of at least five — from 50 cubic meters to 330 cubic meters.” (Hence the name “B330.”)

The B330’s backbone consists of two core structures that run through the center of the cylindrical module. This hard framework is meant to provide grounding for work stations, cooking areas, 3D printers, plant growth facilities, and more that need to be in a fixed location. Each frame sported bright blue hand and foot rails, which are necessary tools for astronauts to latch onto when working in a place without gravity.

Inside the other B330 mockup, we got to see what the habitat would look like from the inside. Walkways, stairs, and handrails were all there to help us earthlings get around, but in space, as their labels indicated, they would not exist. In space, people would simply float from location to location.

The B330 seemed to have it all, even proprietary shielding meant to keep astronauts relatively safe from deep space radiation and cosmic rays. (I was told more robust shielding would be needed if this was sent to Mars.) There was only one big thing missing: windows. In lieu of transparent openings, some of the walls sported curved TV screens, broadcasting the lunar surface or views from up above Earth. Bigelow informed us that while the company is looking into making windows, getting the materials right is tough, especially when your outer walls are made of soft, squishy textiles that are meant to be flexible. “Windows are passé,” said Bigelow. “These TV screens make them obsolete.” Still, I thought, what a bummer it would be to go to space and not get to look outside.

While the press got a tour of Bigelow’s hardware, various NASA astronauts were also checking out the goods. Having actually been to space, astronauts are probably the best people to give your space habitat a five-star review. They’ve been giving feedback on things like foothold placement and the overall flow of the interior as part of NASA’s NextSTEP Habitation program. “This volume is great,” Michael Gernhardt, a former NASA astronaut now in charge of NASA’s NextSTEP Habitation program, told reporters. “But if you lay it out bad, it can work against you. Or it can work for you. So you have great potential, but you have to lay it out right.”

Bigelow Aerospace is one of five companies that has built space habitats on the ground as a part of the program. Bigelow and the other companies have all been receiving visits from NASA personnel to do tests of these prototypes. “What flies will be based on the collective analysis of all these different tests,” Gernhardt said. The next big milestone comes in 2020 when NASA should make a more official decision about the kind of habitat it wants. That’s when things will really get going for Bigelow.

If NASA were to call the company today and ask for a habitat, a B330 could be ready to ship in 42 months, which is a relatively short construction time by space standards. A second station would take 28 months, and a third station would take just a year, according to Bigelow. The team just needs to know what NASA wants.

Of course, Bigelow stressed that the B330 can do more than just make the Gateway grow. It can go anywhere. A model displayed at the facility showed the B330 on the lunar surface, covered in bags of lunar soil to protect against deep space radiation. Other models showed it on the surface of Mars as well as buried inside a Martian cave. Two B330s connected together could also be a spacious transport to Mars, according to Bigelow. But, he added, testing this technology at the Moon first would be key. “Once you’re away from mama and you’re close to Mars, you’re in trouble if you don’t have a lot of backups and you don’t have really highly reliable systems,” he said. “So I think Mars will be all in good time.”

The habitat could also stay a bit closer to home. Bigelow has proposed attaching a B330 to the International Space Station, similar to what the company did with its BEAM module, a much tinier experimental habitat that launched to the ISS in 2016. An attached habitat could serve as a short-term hotel for paying customers.

In fact, the company has been very interested in sending tourists to the space station after NASA opened the ISS for commercial purposes. In June, Bigelow announced that it had bought seats on four launches of SpaceX’s Crew Dragon capsule, a new vehicle that will soon be able to transport people to low Earth orbit. The plans were to sell tickets to tourists for $52 million each. It would be a first step toward transitioning the government-run ISS to a more commercialized station.

However, those plans are no longer in the works, according to Bigelow. He noted that sending tourists to the ISS is increasingly complicated, considering the number of companies that own different assets on the station. “You have to negotiate then with 11 different legal departments,” said Bigelow. So his company’s plans are on pause until NASA figures out how to juggle all of those logistics and regulations. “We were this close to hiring a lot of people and setting up offices in Houston to really get with it,” said Bigelow of the tourist plan. “To get into the whole advertising, entertainment, sponsorship, the whole enchilada. And so we had to put the brakes on.”

Bigelow also noted that finding people who want to pay more than $50 million for a seat to go to space are hard to come by. Though he claims to have come up with a business case where tourists can be sent to a free-flying B330 habitat for free. Future tourists could agree to be part of a reality show contest where they compete to train and then launch to space. “This is all part of what could be a lot of fun to broadcast is the whole training regime,” he said. “It isn’t going to be for sissies.” In exchange, they’ll get a free trip to space with the rest of the US rooting for them to make it. The idea sounds vaguely familiar to one proposed by the now-bankrupt company Mars One, which proposed funding trips to Mars with massive reality TV shows.

For now, though, all of these ambitious ideas are just ideas. The more realistic goal is getting into lunar orbit. What we heard over and over again was the importance of having the B330 on Gateway. For the company, the government funds would be a rich payday, giving Bigelow the resources it needs to build and launch a working habitat into deep space. Then, if it works out there, more contracts could follow.

Without the Gateway program, it’s unclear what the path ahead looks like for Bigelow. At one point, the CEO joked about building a chapel to pray for good news on the program. Now, it all depends on NASA’s wants and if the agency has the funding to give to Bigelow and other habitat providers. But Bigelow has made its intentions very apparent. “A chance to do a full 330, it’ll be exciting to be part of such an ambitious endeavor,” said Bigelow. “It’s not just going back to the Moon. This is something much, much larger than that.”

Photography by Loren Grush / The Verge