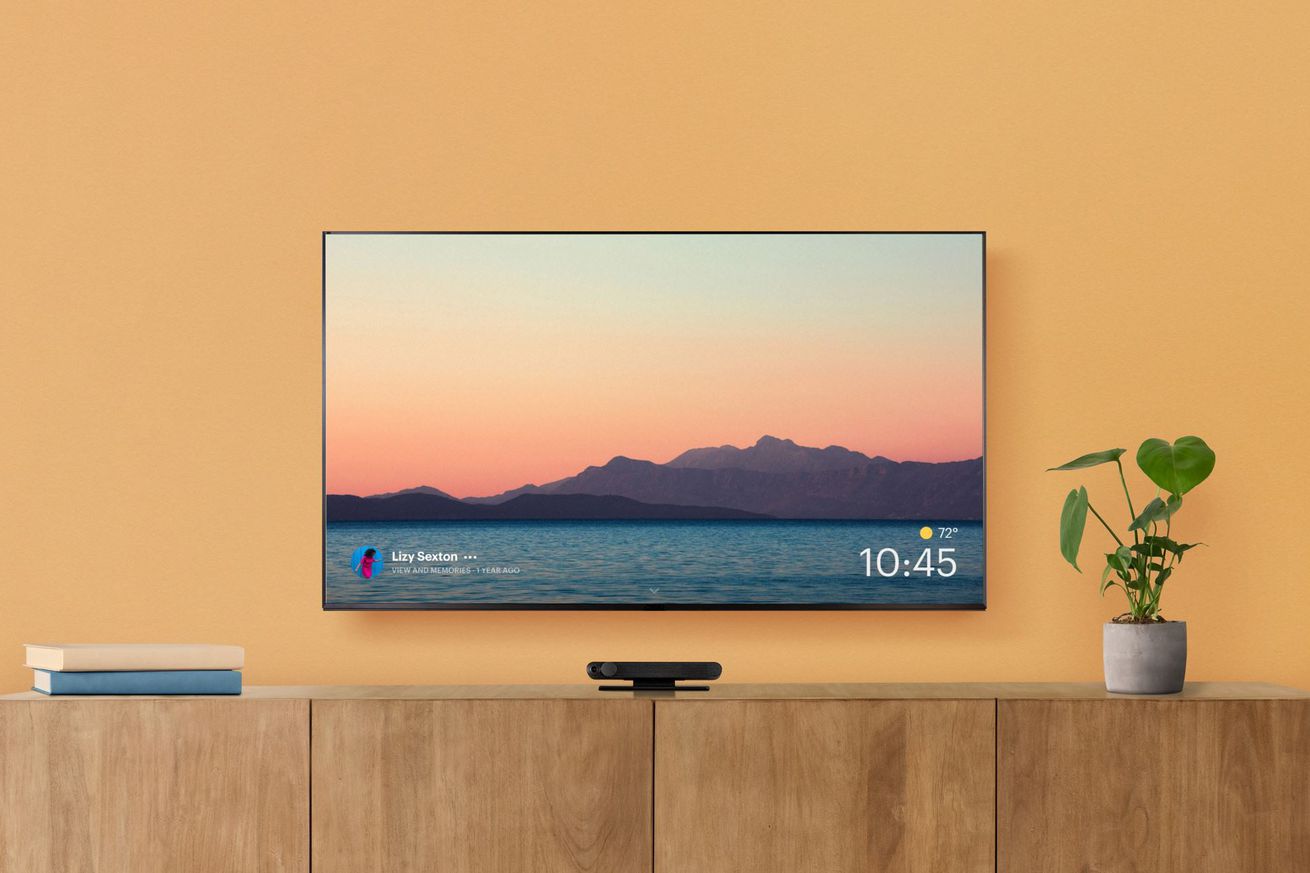 Facebook is bringing its connected device strategy to the television. The company today announced Portal TV, an accessory that brings the company’s wide-angle video chats to the biggest screen in the house. Portal TV is begins shipping November 5th for $149 — or you can also bundle two Portal devices together and take $50 off.

Portal TV is one of three smart video chat devices the company is announcing today. You can read about the others — the 10-inch Portal and the 8-inch Portal Mini — here. The device’s largest model, the Portal Plus introduced last year, is still on sale.

Plug Portal into your TV using the HDMI port, sign into your Facebook accounts, and you can begin making calls using Messenger and WhatsApp. WhatsApp calls are encrypted end to end, which may be a selling point for people who want more assurances that Facebook isn’t mining the contents of their calls for advertising or other purposes. (Other people will continue to balk at the idea of a Facebook camera and microphone in their home.)

The device, which resembles a slimmed-down Microsoft Kinect, uses Facebook’s Smart Camera technology to pan and zoom as people in the call move around the room. This is especially useful with small children, who are forever dipping in and out of frame in other video chat calls, Facebook executives told reporters on Tuesday at a product demonstration in San Francisco.

You can disable the camera and microphone via a tap or a sliding cover at the front of the device. Like other smart speakers, Facebook audits a subset of anonymized recordings and has human reviewers listen to them to improve the service. But you can now opt out of this recording feature in the app’s settings, the company says. (For more on the device’s privacy features, see Facebook’s explainer on the subject.)

When you’re ready to make a call, you can say “Hey Portal” to wake up the device and ask it to call a person in your network. Once the call is live you can apply augmented reality effects to your face and voice. These carry over into the device’s “Story Time” feature, which lets you narrate children’s books while donning a variety of virtual costumes.

Portal TV also introduces a new picture-in-picture mode that lets you keep one eye on friends and family members while you watch another show. Andrew “Boz” Bosworth, who runs Facebook’s AR and virtual reality products, told me he could imagine using the feature to watch a Facebook Watch show together with his father. (Picture-in-picture mode currently only works with Facebook’s original series, though the company is working to bring it to other streaming services.)

You can also watch Amazon Prime Video, Showtime, CBS All Access, and other streaming services through Portal TV, on the off chance that you don’t already have access to those services through a streaming stick, set-up box, smart television, or video game console.

For people who spend a lot of time video chatting with friends or family, or who would like to do more of it, Portal TV could be worth a look. The way the camera frames and tracks shots is legitimately impressive. And the TV screen could enable larger families to talk with everyone crowded together in the living room in a way that a phone or desktop computer can’t compete with.

Facebook’s hardware products will likely continue to be dogged by privacy concerns. But the larger issue for them might simply be that their rivals in home hardware — Amazon, Google, and Apple — are so far ahead of them in building an install base.

Portal TV, if nothing else, is a product that none of those rivals have yet built: a camera for the TV, seamlessly integrated with your network of friends and family. Whether or not it succeeds on a large scale, I expect Facebook to keep trying. Its rivals are building a new social infrastructure inside the house using voice and video chat, and Facebook can’t afford not to compete.