Killer robots: why do so many people think they are a good idea? | Stuart Heritage 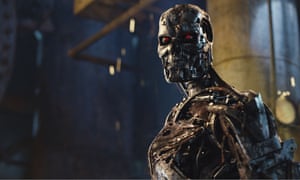 According to a recent survey, 39% of us aren’t against machines capable of destroying humanity. Surely there are some things we can all agree on

Laura Nolan is a modern hero. A former Google software engineer, Nolan resigned from her job last year after being asked to dramatically enhance the artificial intelligence used in US military drones. She is now calling for a ban on all forms of autonomous weapons on the basis that they might accidentally initiate a catastrophic global war. She said this as part of her role as a member of the Campaign to Stop Killer Robots.

Now, listen, sometimes I’m able to kid myself about the goodness of people. I might not agree with them all the time, but at least I can understand our differences. I get why they might vote for a certain political party, or why they wanted Brexit to happen. After all, aren’t we all just people muddling through the muck together? And then I realise that there is a group called Stop Killer Robots, and it actually has to convince people to stop killer robots. Killer bloody robots, for crying out loud. Its only goal is to stop robots from destroying all of humanity as we know it, and it needs to exist because it turns out that some people aren’t automatically horrified by the idea.