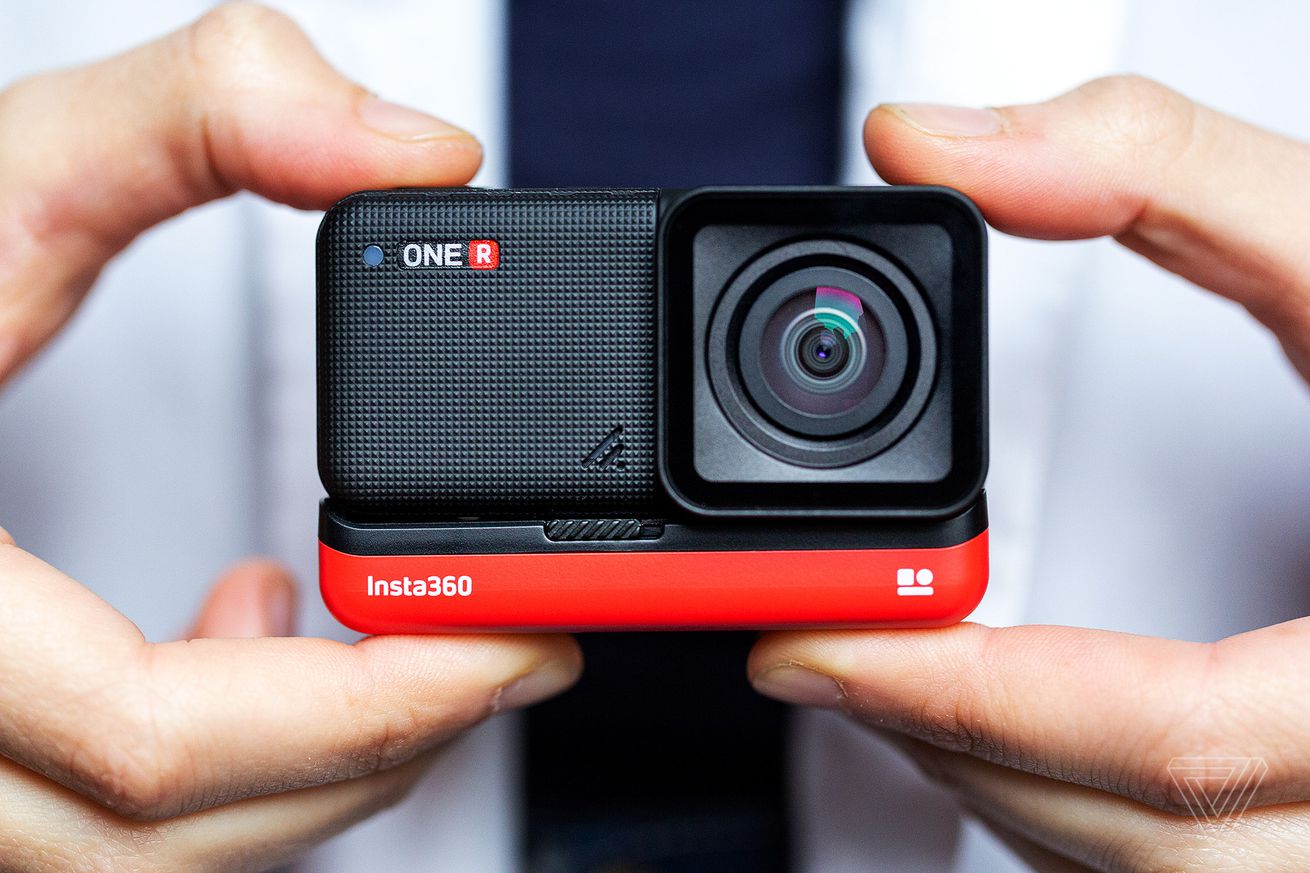 This is the Insta360 One R. Like Insta360’s prior cameras, it’s capable of shooting 360 degrees of footage. But it’s also a standard 4K action camera. For someone on the fence about taking a full leap into buying a 360 camera, this is the perfect in-between device.

The One R is made up of three components: the lens; the core, which houses the screen, power and record buttons, USB-C port, and microSD card slot; and the battery base. There are two ports on the core that coincide with prongs for the lens attachments and the battery just snaps onto the bottom. Once it’s all put together, it feels solid, compact, and complete. The Insta360 One R Twin Edition is available to purchase starting today for $479.99 and will come with one core, one battery, a 360 camera mod, and a 4K camera mod. Insta360 will also be selling just the 4K camera mod with one battery and one core for $299.99.

I was able to spend some time with a preproduction One R, 360 attachment, and 4K camera attachment ahead of today’s announcement. Insta360 says that it is working on the image processing for video and still images and it will be improved from what I experienced when the camera ships to customers, so keep that in mind when reading about image quality impressions.

As a complete unit, the One R is waterproof up to five meters. There’s a slim gap between the battery grip and the rest of the camera on the preproduction unit I was shown. Insta360 tells me this does not affect waterproofing, but will ultimately be removed from the final version for aesthetic reasons. The One R also comes with a plastic housing for mounting. There are two very familiar prongs on the bottom that connect to pretty much any mount you could want.

The big upgrade, though, is having a real, full-color touchscreen. Although it is very low resolution, you can use it to change frame rates, view playback, and scroll around the frame. Double tapping the screen will switch between which lens you’re viewing. Despite the super low resolution, the screen is extremely responsive. The bigger issue is the screen’s 1.3-inch size, though. I have small fingers, so this wasn’t a total deal-breaker, but I could see how this might be frustrating with gloves or for anyone with bigger hands. Also when switching between the GoPro Max and the One R, it felt like a relief to use the Max’s screen because it’s almost twice the size.

The best feature of the 4K camera attachment is the ability to use the same screen for both rear and front-facing capture, since you can just flip the lens around to face it the other way. It can shoot up to 60 fps at 4K and up to 200 fps at 1080p resolution.

Take away the ability to quickly convert it to a 360 camera, though, and the One R isn’t the most compelling action camera. Firstly, I prefer the color profile GoPro uses. GoPro isn’t afraid of the shadows and therefore produces an image with more contrast. Secondly, Insta360’s stabilization just isn’t as good as GoPro’s. This is most noticeable in the background of Insta360’s stabilized footage. The buildings or trees will have a jittering effect.

I mostly used the 4K camera attachment to take photos. There is a lot of smoothing happening in the image, at least in the preproduction firmware, especially in the backgrounds, and I found the image to be a bit over-processed. The software works hard to even out the low light and highlights. I also thought the auto-exposure mode was a bit slow, often leading to blurry subjects even while shooting in daylight.

Insta360 will also be releasing a 1-inch Edition mod co-engineered with Leica for $549.99. It will be capable of 5.3K resolution. Insta360 will be shipping this mod in February 2020, but I was unable to try it out for this article.

The process of editing footage from the camera has changed very little since the One X. The desktop app is still not intuitive, but does now have ProRes and H.265 export options. I am still frustrated with Insta360’s .insv file format, though. If your footage will never make it onto a desktop this doesn’t matter, but not being able to see a preview of the file in macOS’s Finder is annoying.

The mobile app is still easy to use and adds a few new features including Deep Track active subject tracking, Auto Framing, and CineShots, which are auto-editing tools. I was pretty impressed by the tracking. It holds people or objects right in the center of the frame without you having to set key frames. The other new feature is being able to edit your footage without having to first download it onto your phone. You can use Deep Track and set key frames all without having to wait for the file to download, and everything is really snappy with no lag. It also doesn’t kill your camera’s battery in the process.

Battery life, at least with this preproduction unit, is right on par with the One X. You can get a full day out of it if you are careful to shut it off when you’re not using it. It also supports quick-charging with up to an 80 percent charge in half an hour on a 2 amp charger.

It’s great to see a 360 camera getting smaller, more durable, and not locked into a 360 ecosystem. For someone curious about 360, but interested in something that’s more versatile, the One R is ideal. And although the 4K camera falls flat in terms of image quality, Insta360 will be releasing a 5.3K Leica-branded attachment in a few months that they are hoping will satisfy the more professional among us.

When this was pitched to me, I had very little faith that adding more parts to a camera system would be a success or actually work well at all. But by shrinking down the same One X camera system into a smaller package and giving you the option to use it as a standard action camera, Insta360 made a more approachable and easier-to-use 360 camera.

Photography by Becca Farsace / The Verge