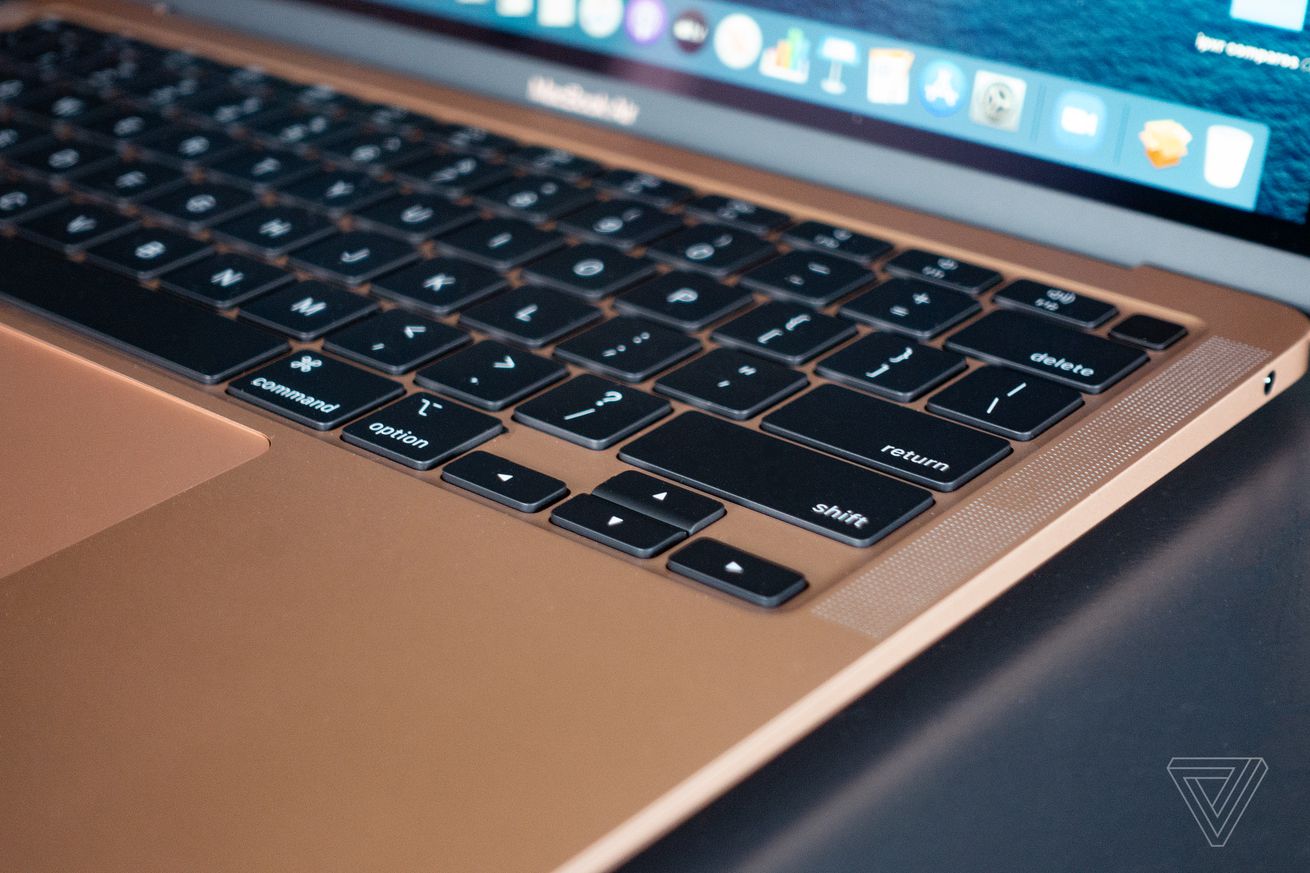 Photo by Nilay Patel / The Verge

Nilay Patel published his 2020 MacBook Air review yesterday. He calls it “the best Mac for most people” and I agree. After three iterations in its modern incarnation, the MacBook Air has finally been restored to its place as the default MacBook.

When your computer goes haywire and you can’t seem to diagnose the problem, usually the easiest solution is to just wipe everything and start from scratch. You restore default settings and start again with a clean slate, avoiding whatever mistakes you couldn’t undo before.

It’s not a perfect metaphor for what Apple did with the MacBook Air, but it’s not far off. It fits because Apple fixed the keyboard, mainly. But the company also gritted its teeth and held out until Intel could make a chip that worked well for the Air’s needs. In so doing, Apple eliminated the major reservations we had with the MacBook Air.

It was a very, very long time coming.

I will admit that when I first encountered the butterfly keyboard on the 2015 12-inch MacBook, I didn’t foresee what a fiasco it would become. And through subsequent years, it took some time for the issues to become obvious — credit once again to Casey Johnston and Joanna Stern for leading the charge on calling Apple out.

During those years, Apple tried iterative fixes to the fundamentally flawed butterfly design. At the same time, it let the MacBook Air languish in a pre-retina, pre-USB-C state. But even so, it remained the default MacBook. People liked the USB-A port, they liked the MagSafe power connector, they liked the keyboard, and most of all they liked the price.

The 12-inch MacBook, beloved as it was by many (including me), wasn’t a viable replacement as it never got powerful enough. I still think that Apple hoped it would be that back in 2015, and that’s why it was just called the MacBook, no modifiers. Apple also made an effort to get people to buy an entry-level MacBook Pro, as Nilay pointed out in his review yesterday. That didn’t take, either.

So in 2018 Apple finally refreshed the MacBook Air. I reviewed it and found it completely ...whelming. It finally added a retina display, but it wasn’t much faster than its then three-year-old predecessor. 2019’s edition kept the keyboard we no longer trusted and switched to a processor that still didn’t feel quite powerful enough to recommend without reservation.

As Nilay notes, 2020’s finally just gives us the keyboard we want and — at least on the $1,100 model — a processor that shouldn’t slow you down when you’re doing the basics, or even just a little more.

Before this week, if somebody asked what MacBook they should buy, the appropriate response was a heavy sigh

Before this week, if somebody asked what MacBook they should buy, the appropriate response was a heavy sigh. The sigh came because the answer involved juggling lots of different variables until you landed at one of several answers, all of which felt like a compromise.

Now, you can simply say this: get the Air unless you need to do a lot of intensive work like video editing or compiling code, in which case get a Pro. (Well, get a 16-inch MacBook Pro. If you want a 13-inch, wait for that keyboard to get updated.)

Apple even managed to make a version that crossed the psychologically important sub-$1,000 mark (by a buck). Again, most people should pony up for the upgraded processor, but that’s a minor nit.

A less minor complaint is how macOS needs a more thoughtful, cohesive strategy for its user experience. Siri and search are getting stale, Catalyst apps aren’t taking off, and the constant permission prompts recall the bad old days of Windows Vista. I hope we see something meaningful in Apple’s virtual WWDC this summer.

So that’s that: the MacBook Air is the default again, just like the 3rd-generation MacBook Air that you likely still think of when you think of a MacBook.

That MacBook Air was the default because of a long list of superlatives: it was thinner, better built, more beautiful, more reliable, and had better battery life than other laptops.

This MacBook Air, however, gets to its default status mainly by dint of getting rid of problems like the keyboard and the processor, not by outclassing the competition. Lots and lots of Windows laptops are great now and in many cases surpass even this Air on any number of metrics.

Apple has reinvigorated its commitment to Mac hardware in the past couple years. The Mac Pro is powerful, the Mac mini is actually seeing somewhat regular updates, and the iMac remains an incredibly good desktop machine. But what the vast majority of people buy are laptops, and for too many years Apple made those purchases too fraught. Those days are thankfully over (or, technically, they will be when the last butterfly keyboard MacBook exits the lineup).

So welcome back, MacBook Air. Glad to see you made it through the desert — all that sand was hell on keyboards.

News from The Verge

┏ Huawei hopes the P40 Pro can lure you away from Google. Jon Porter takes a close look at the P40 Pro and explains the differences between all three models. There are a lot — and I mean a LOT — of camera differences to try to track. But as I wrote yesterday, outside of China I am not really sure this is going to be worth using. Huawei needs to do quite a lot to convince people it’s worth the pain of going with Google services and the apps it supports.

┏ OnePlus 8 Pro may come in a slick seafoam green and finally have wireless charging.

┏ Xbox Series X graphics source code stolen and leaked online. It seems like there isn’t going to be a ton of fallout from this, but yikes anyway.

┏ CarPlay dashboard gets third-party maps support in iOS 13.4. Google and Waze won’t commit, but obviously I hope they work better. I’ll be honest with you: I never expected Apple to open up access to this dashboard view to third party mapping apps. The CarPlay dashboard is by far the best smartphone interface on a car I’ve ever used because it just so obviously displays the stuff you want on one screen. I don’t know why Google hasn’t gotten here yet and I don’t know what took Apple so long to make it, but it really is great and I’m glad Apple opened it up.

┏ Google’s new Pixel Buds could hit spring release date, as they may have just hit the FCC. After such a long wait, these had better be inspired in some respect. Inspired sound quality, incredible Google Assistant integration, or something. At this price and in this year, shipping mediocre earbuds is not okay. I’d say it’s unfair to hold Google to the high standards set by Apple and Samsung, but them’s the rules. You don’t get a handicap in consumer tech.

┏ Polaroid’s new Now instant film camera delivers a classic, punishing experience. Cameron Faulkner reviews the latest film camera. I want to like this thing, it has some clever ideas about autofocus. But maybe too clever by half.

┏ Huawei’s Watch GT 2E is a sporty redesign of its last smartwatch.

┏ Here are a bunch of free music apps and sample packs while we’re all stuck inside. Great roundup from Dani Deahl. I recently bought myself a little Pocket Operator (the PO-20 Arcade) and it’s been a great way to chill out and not think about anything other than the tune I am making. Since bailing on choir in the sixth grade, I have done nothing to foster a musical skill but I still find it fun to play around with. If you’re like me, I encourage you to try out one of the things Dani linked to here.

Tech and the pandemic

┏ Amazon warehouse workers are outraged after a coworker tested positive for COVID-19 and they weren’t notified. Important reporting from Josh Dzieza.

┏ Dyson developed and is producing ventilators to help treat COVID-19 patients. So it is a long-running joke that if a thing involves moving air in any way, Dyson will make an overpriced gadget that does it. Well, joke’s over: if this thing works I’ll never make fun of overpriced hairdryers again.

Some YouTube creators, like Chris Steinbacher, one of the team members behind the car creation channel B is for Build, are taking more extreme measures to ensure that new content appears on the channel consistently. Steinbacher and his team agreed not to see anyone outside of their families and one another so they can keep working. “Either everyone goes home, or we all agree that we don’t go out and get each other sick,” Steinbacher told The Verge.

┏ Some Tesla factory employees still had to work after the production shutdown.

┏ The coronavirus is now the American virus. We could have prevented a lot of suffering. We still have time to do so now.