Most Republicans and Democrats agree on these two climate strategies 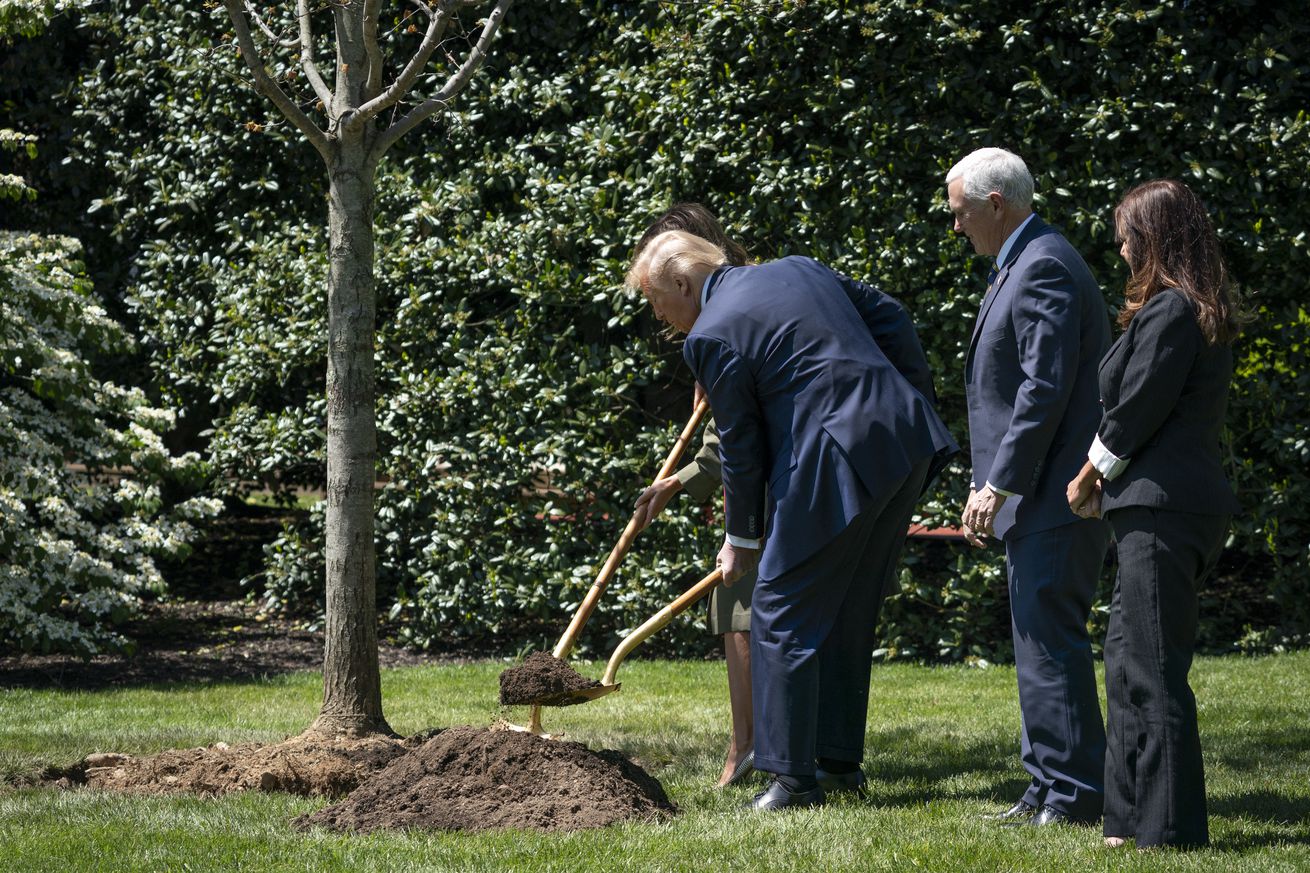 President Donald Trump participates in a tree planting ceremony in recognition of Earth Day and Arbor Day on the South Lawn of the White House on April 22nd, 2020. | Photo by Drew Angerer / Getty Images

Two-thirds of Americans think the government needs to do more to address climate change, according to a new poll from the Pew Research Center. Some environmental policies garnered support across the board, reflecting a shift within the Republican Party toward addressing climate change with corporate-friendly fixes. The most popular policies focus on removing planet-warming pollution after it’s been released, rather than cutting down greenhouse gas emissions in the first place.

The Pew Research Center surveyed 10,957 adults in the US between April 29th and May 5th for this study, while the country coped with an economic crash and the COVID-19 pandemic. Overall, nearly 80 percent of Americans said that developing renewable sources of energy like wind and solar was a bigger priority to them than producing more oil and gas.

Nine out of 10 people surveyed liked the idea of planting a trillion trees, and 84 percent supported tax credits for businesses that capture and store carbon dioxide. Drawing down planet-heating carbon dioxide — whether it’s through trees or new gadgets — was included in all the game plans the United Nations laid out for keeping climate change to a somewhat manageable 1.5 degrees Celsius of warming. Carbon capture technologies and tree planting schemes have increasingly gained support from Republicans that previously dragged their feet on tackling climate change. These strategies, however, are controversial among scientists and environmentalists.

Carbon capture technologies that scrub carbon dioxide out of emissions from smokestacks or pull it down directly from the atmosphere are gaining traction. Republican lawmakers introduced legislation in February that would fund carbon capture research and expand tax credits. These emerging technologies have also gotten a boost from the tech industry. Microsoft pledged in January to capture all the carbon dioxide emissions it’s ever released. These technologies give companies a way to address the tons of greenhouse gases humans have pumped into the atmosphere for generations. But critics, like Sen. Bernie Sanders (I-VT), have called the technology “a false solution” because it doesn’t push polluters to quit burning fossil fuels in the first place.

Then there are the highly popular tree planting campaigns. A 2019 study found that planting a trillion trees could negate more than one-third of humanity’s carbon emissions since the Industrial Revolution. But a group of 46 scientists penned a response saying that the study overestimated how much carbon the newly planted trees could actually store by about five times.

“We worry that a myopic focus on tree planting will reduce the capacity of people to adapt to climate change while distracting from efforts to conserve intact ecosystems and reduce fossil fuel consumption,” Joseph Veldman, lead author of that critique, said in a statement at the time.

Three other groups of scientists also disputed the findings. But the idea of a trillion planet-saving trees has stuck, both in people’s imaginations and in policymaking. Despite the pushback, the World Economic Forum announced an initiative to plant 1 trillion trees in January. President Donald Trump (whose administration is actively rolling back environmental protections) said that he supported the plan. Then Republicans introduced legislation in February calling for a trillion trees to be planted by 2050.

No plan of attack on climate change will be complete without efforts to actually reduce fossil fuel use — and the resulting greenhouse gases released from power plants and tailpipes. But the recent Pew research data shows that measures that are tougher on polluters, like more restrictions on power plants and higher fuel efficiency standards, were somewhat more divisive. Roughly 90 percent of Democrats and Democrat-leaning Independents supported those tougher measures. In comparison, just over half of Republicans favored stronger fuel efficiency standards, and 64 percent were supportive of stronger power plant regulations. Those numbers aren’t too different from 2018 figures from the Pew Research Center on how effective Republicans thought those policies were.

The new poll did highlight a looming generational change in the Republican Party. Younger Republicans are more likely to say the government isn’t doing enough to protect the environment and prioritize renewable energy over fossil fuel expansion compared to their older counterparts. That’s an important shift because the future of climate policy depends on dramatically changing the way we power our economy — and trees and carbon capture aren’t going to get us there on their own.