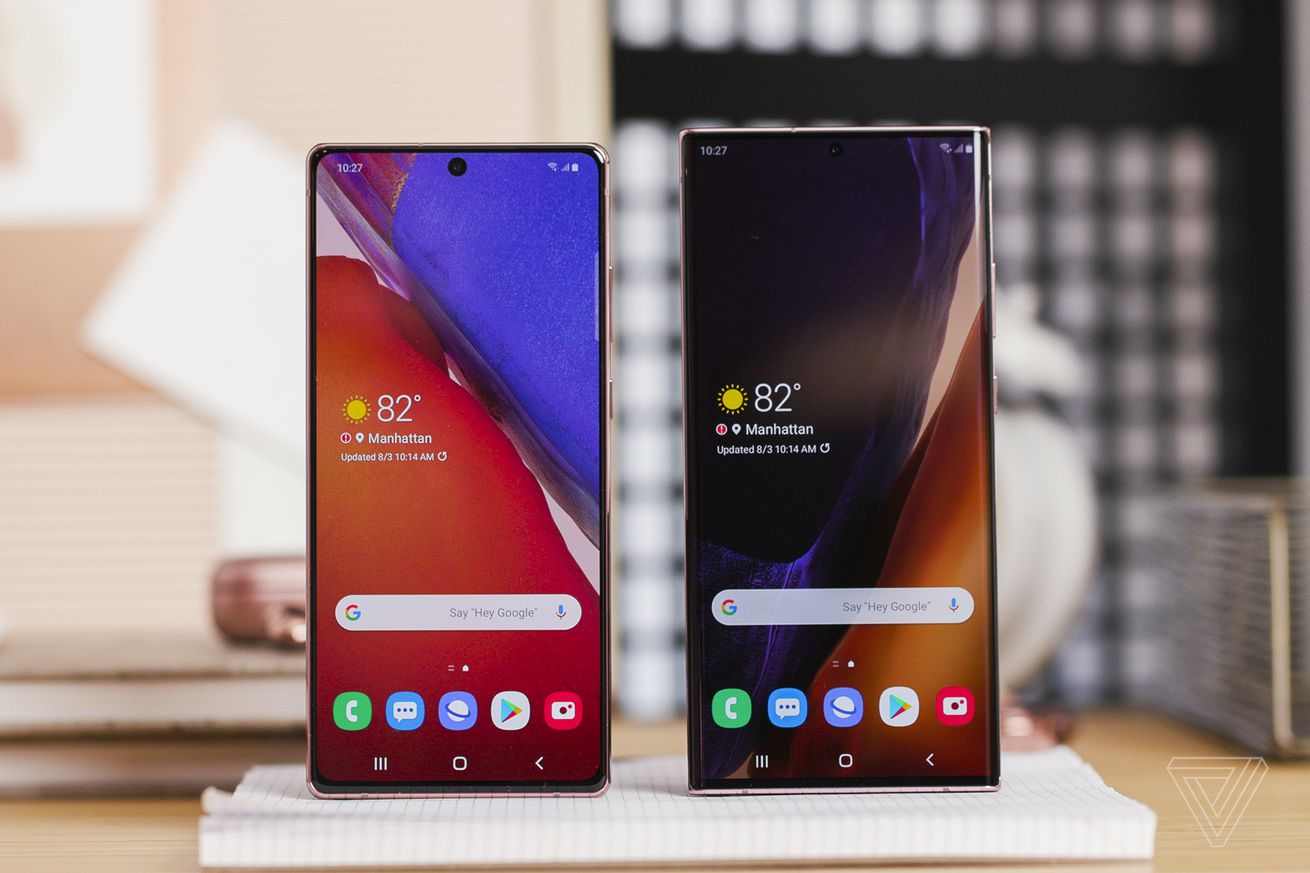 Samsung’s big Unpacked event went off with just a few hitches. It’s nice to know that even when an event is online some kind of logistical issue can cause AV problems and delay the beginning of a keynote. Makes everything feel a little more normal.

I tease — the event itself was actually well executed. Samsung didn’t fake an auditorium but still did its best to make the occasion feel big. Microsoft and Apple went much further at embracing a new online format, but Samsung managed it fairly well. There were definitely cringe moments (Samsung kept showing Bluetooth pairing interfaces?), but overall it was a strong event. Plus, Samsung had a much more diverse and engaging set of presenters than any other tech keynote in recent memory. Bravo, Samsung.

But what about the products? Well, my big question was what the flagship would be and the answer is obvious: it’s the Galaxy Note 20 Ultra. You can read my writeup in the link below, but do not miss the video from Becca Farsace — who actually got to use the Note 20 for a brief period of time.

As for that Galaxy Z Fold 2, Samsung pushed off a bunch of details until September 1st. For today, it mainly spent its time talking about how the second edition of the Fold had addressed all the durability concerns expressed by the press and YouTubers (one of my videos made a brief appearance). The message was refreshingly honest and direct: the first one wasn’t great, we’re fixing it.

At the end, Samsung’s TM Roh held a scripted interview where he laid out Samsung’s priorities for the coming years: foldable and 5G. The Fold 2 is going to be a big test of that.

Samsung didn’t mention Bixby, its digital assistant, a single time. I’m told it’s still on the phones and hasn’t been de-commissioned or anything — but woof. That’s an inside joke, by the way. On The Vergecast podcast we have decided that Bixby is actually a dog butler with shoes. It’s a thing. We’ll make better jokes on this week’s Vergecast, where we will absolutely be breaking down all of Samsung’s announcements.

Anyway, there’s plenty to catch up on if you missed it, so here’s the links.

┏ Samsung announces Galaxy Note 20 and Note 20 Ultra . I wrote up my thoughts on the main device of the day, the Note 20 Ultra. The regular Note 20, I’m sad to say, does not seem very special.

The Galaxy Note 20 Ultra is Samsung’s best attempt at offering the best you can get on Android. The regular Note 20 is a lot less ambitious but still fairly pricey, probably thanks to those 5G radios. Whether either can live up to or exceed expectations is a question for the review — which we’ll bring to you later this month.

┏ Samsung’s Galaxy Tab S7 Plus tablet has a 120Hz OLED display and 5G. The screen on the Tab S7 Plus sounds like it’s amazing.

┏ Samsung announces Galaxy Buds Live with active noise cancellation and bean-shaped design. I just need to point out that Samsung’s own website for this product let one “Beans” product naming through, confirming Samsung had originally been calling them beans. It is an act of sheer cowardice to back away from such excellent and on-point branding. Anyway, this detail from Chris Welch on Samsung’s noise canceling is fascinating:

But with the unconventional design of the Galaxy Buds Live and their lack of in-ear tips or an actual seal, Samsung’s noise canceling works a bit differently here compared to what you’d experience from the AirPods Pro or Sony 1000XM3 earbuds. The company says that the Galaxy Buds Live are designed to cut down on very low, constant frequencies like the sound of an airplane cabin or the rumble of a train. But they’ll let the bulk of most sounds through — and that’s intentional.

┏ How Samsung’s Galaxy Note 20 compares to its predecessors and competitors.

The biggest question, of course, is how durable the Galaxy Z Fold 2 will be. The original Fold was infamously delayed for months after the first review units of the $1,980 phone began to fail due to the fragility of the plastic-covered panel. Samsung eventually did release the Fold after taking time to engineer a more robust model of the device, but it still had to caution users to handle the phone with kid gloves, with warnings about dust and applying “excessive pressure” to the touchscreen when tapping it.

┏ Microsoft and Samsung have a special partnership for Xbox Game Pass on Android.

┏ How to preorder the Samsung Galaxy Note 20.

Samsung says it will happen for phones from the Galaxy S10 and newer, but that some of its lower A-series phones may not be up to it. In a statement to The Verge, Samsung clarifies that the guarantee “applies to S, N and Z Series. A Series will support until hardware allows.”

┏ Samsung will let you reserve a Galaxy Z Fold 2 today ahead of official preorders.

┏ Instagram launches Reels, its attempt to keep you off TikTok.

┏ Google is sending a complicated privacy email to everyone — here’s what it means. Me again:

Google is returning to having humans analyze and rate anonymized audio snippets from its users. However, it’s also taken the major step of automatically opting every single user out of the setting that allows Google to store their audio. That’s why you might be getting an email today: Google would like you to opt back in to the program, and it’s trying to provide clearer information detailing what it’s all about.

┏ Android TV’s new home screen will now recommend movies, TV shows, and apps. Seems like every TV platform needs to make a little on the side with these subscriptions.

The other update arriving on Android TV is a reworked subscription flow that makes it easier to subscribe to paid subscriptions, like TV streaming services. Where you’d normally have to grab your phone to complete the process, or painstakingly use a TV remote to fill out your credentials, the new addition lets you authorize the payment and automatically set up a subscription by linking your Google account from Android TV with just a few clicks.

┏ Microsoft integrates Android apps into Windows 10 with new Your Phone update. Microsoft’s embrace of Android and how quickly that hug has turned into genuinely useful features on Windows is remarkable.

The future of xCloud on iOS remains unclear and potentially out of Microsoft’s hands. The issues appear to be related, in part at least, to Apple’s rules on in-app purchases through its App Store. Microsoft is avoiding in-app purchases with the Google Play Store version of Xbox Game Pass that will include game streaming (xCloud).

┏ Apple and Google’s COVID-19 tracking system will make its full US debut in new Virginia app. As Nicole Wetsman makes clear, this solution won’t solve everything. Nevertheless, I would like to see something like it in every state, nationwide:

Apps that automate the contact tracing process can help flag people who were near someone with COVID-19, even if they may not remember interacting. They can also provide instant notification of a possible virus exposure. But they’re not a replacement for manual contact tracing, because they’re only able to monitor the contacts between people who have smartphones and decide to use the app. The VDH said it’s not using the app as part of its own contact tracing process, but that it offers a way for users to track their own potential exposures.

┏ NASA astronaut on SpaceX Crew Dragon return: ‘Sounded like an animal’. Loren Grush gets into what that descent was like for the astronauts:

“I did record some audio of it, but it doesn’t sound like a machine. It sounds like an animal coming through the atmosphere with all the puffs that are happening from the thrusters and the atmospheric noise,” Behnken said during a press conference following the landing. “It just continues to gain magnitude as you descend down through the atmosphere.”