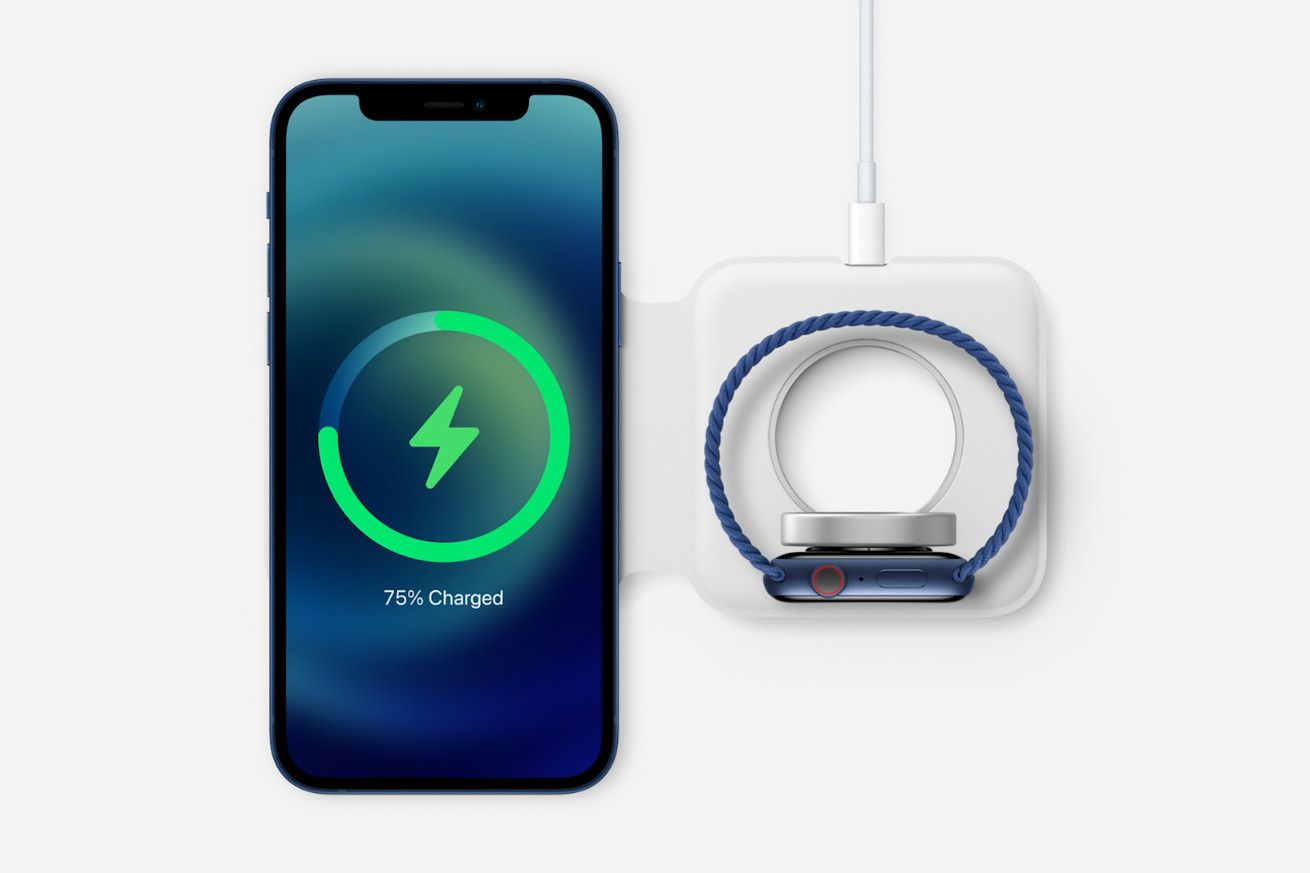 Apple revived one of its more beloved technologies, MagSafe, at its annual iPhone reveal on Tuesday, showing off a new line of smartphones with magnets built into the back for fast and sturdy connections to wireless chargers, snap-on cases, and other accessories.

While the old MagSafe was a safety feature for charging laptops without worrying about damaging your machine when the cord was ripped out, the new MagSafe is a savvy, smartphone-centric accessory play for Apple. It lets the company build a new gadget ecosystem for the iPhone that it controls entirely, just like Lightning and Apple’s other proprietary ports and cables, while also offering tangible benefits like faster 15W charging.

But while MagSafe now seems like a nice complementary feature to the newly announced iPhones, it paves the way for Apple to make magnetic wireless charging the centerpiece for how we charge all of our devices going forward. Just look at the company’s new MagSafe Duo Charger, a wireless charging stand for both the Apple Watch and iPhone, or Belkin’s even more robust (and also outlandish-looking) MagSafe 3-in-1 charger that lets you charge an Apple Watch, AirPods, and an iPhone all at once. Both seem to nudge us closer to a world in which the iPhone doesn’t need to support Lightning charging or any kind of wired charging whatsoever.

And Apple is rumored to be working on a portless iPhone for just that reason. Removing the port would mean Apple could avoid — if it wanted to — transitioning its smartphone line over to the USB-C standard it now uses on MacBooks and higher-end iPads. It would also allow the company to make devices even thinner, using the same logic it employed when it removed the headphone jack. Waterproofing could become even more effective with fewer holes in your phone, especially if Apple can convince us (and cellular carriers) to embrace an embedded SIM card instead of including a SIM slot in each phone. With MagSafe, Apple could present an alternative way to charge your phone entirely through wireless charging and whatever cables and adapters it may come up with to solve your on-the-go charging needs.

There is certainly a financial incentive for Apple to retain control of its charging ecosystem. Apple’s “wearables, home, and accessories” division, which includes major products like the Apple Watch and AirPods in addition to all cables and chargers, was the lowest earner in the company’s most recent financial quarter. But it’s basically neck and neck with the entire iPad business and earns close to $6.5 billion a quarter, making it still vital to Apple’s bottom line as its iPhone revenue growth continues to slow and Apple leans more on its ecosystem and services.

But Apple is known to at least make an effort to offer a consumer benefit in exchange for eschewing universal standards or making a widely anti-consumer product choice. In this case, a full investment in MagSafe does seem like it would have some very real quality-of-life improvements to owning the iPhone, even if it did involve some serious habit changes for iPhone owners.

For one, wireless charging is simply easier and less cumbersome than plugging in a cable, and even more so when magnets are involved so you don’t have to adjust the device’s positioning to ensure the charger activates. MagSafe also presents situations like using your phone in bed without worrying about bending or breaking a cable or damaging the phone’s port.

Plus, the sheer variety and utility of accessorizing you can now do thanks to built-in magnets on the back of the iPhone is exciting. The snap-on wallet and red leather charging case Apple is making are just a couple of the countless potential accessories we can imagine. Think of magnetic snap-on zoom lenses or bundles of cases that can attach magnetically and don’t need to be forcefully ripped off your phone if you want to swap one for another. PopSocket, the leading maker of removable grips for iPhones, is surely fast at work on MagSafe-ready versions of its products.

For Apple, MagSafe also presents an opportunity for it to do a little product revisionism after the AirPower fiasco of last year, in which Apple canceled the already-announced product after determining that it couldn’t reliably create the all-in-one wireless charging mat it thought it could. While AirPower is gone for good it seems, MagSafe is now back to help Apple fully realize wireless charging, and MagSafe brings with it the consumer goodwill it accumulated during its time on the MacBook line (even though the earlier iteration of MagSafe is really nothing like this current one).

But MagSafe won’t really shine unless Apple gives it the spotlight, and doing that by making a portless iPhone seems much more likely after yesterday’s announcement. The big questions, however, are whether consumers will find it as hostile as removing the headphone jack, and whether Apple can convince enough of us that it really will make our life better to outweigh the inconvenience of ditching all the cables, chargers, and other accessories we keep accumulating every time the iPhone undergoes a change.