Apple is astonishingly confident in its new M1 Mac processors 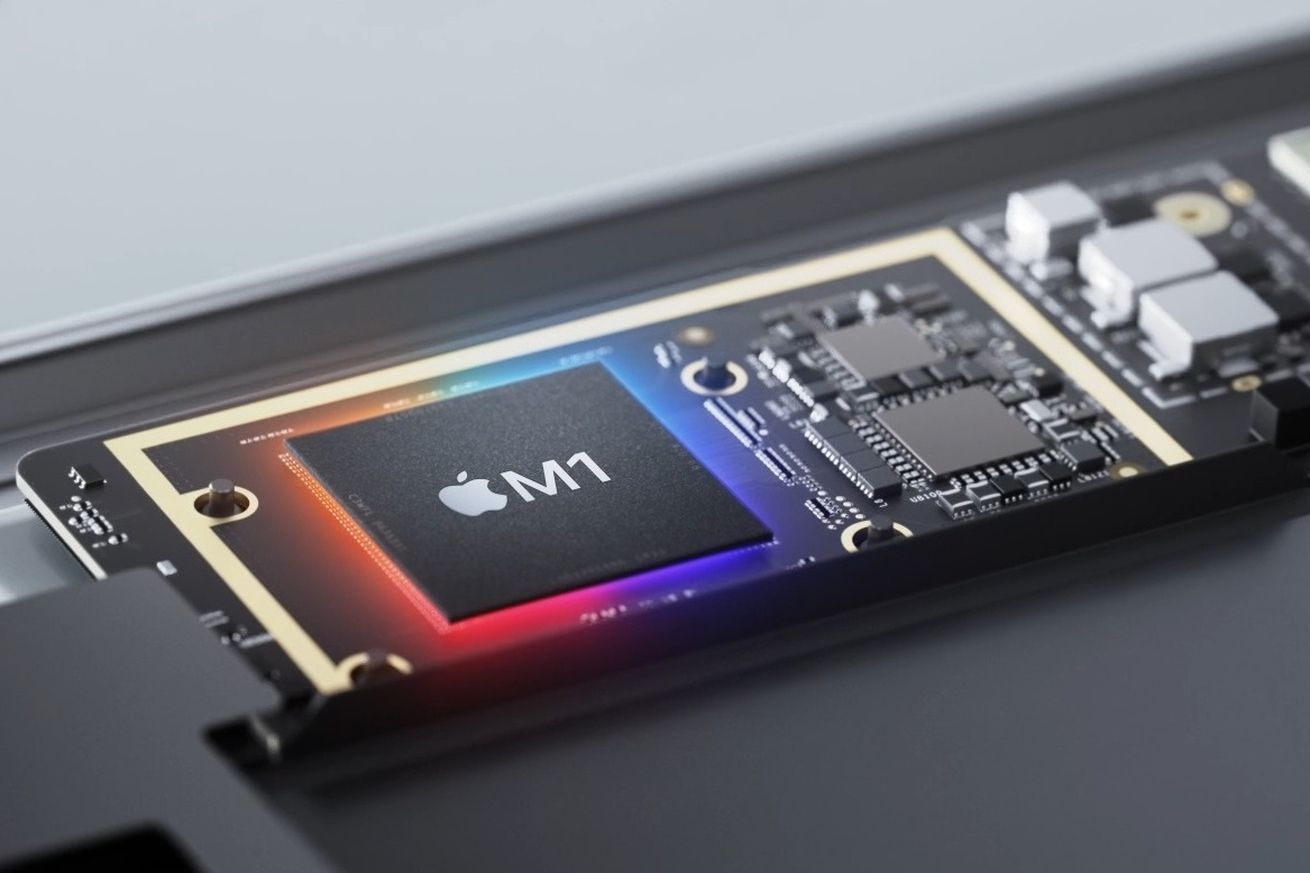 Apple’s big Mac event delivered three new computers — a new MacBook Air, a new entry-level 13-inch MacBook Pro, and a new Mac mini. But really, it delivered one thing that those three computers have in common: the M1 chip. That’s the official name for the Arm-based Apple Silicon the company is going to migrate all of its Mac computers over to.

Ahead of the event, I listed out ten things to watch for and though Apple didn’t really go as deep as I would like, it did at least strafe all but two of them. We had wall-to-wall coverage at The Verge, and a good place to start is our article detailing the 5 biggest announcements from Apple’s ‘One More Thing’ hardware event.

Here’s my takeaway: Apple is astonishingly confident in this chip, these computers, and the software it has developed to ensure they all run well.

First, Apple is making battery claims that I would characterize as “bombastic at best” if they were applied to a laptop with an Intel chip inside. With this M1 chip, I have no frame of reference at all except for Apple’s claims — which are substantial.

Apple claims 18 hours of video playback on the MacBook Air and 20 hours on the MacBook Pro. Video playback is a bad metric (especially since modern chips are optimized for it), so the real thing to note is those claims are significantly higher than what Apple claimed on their Intel-based predecessors: 6 more on the Air and nearly double on the Pro.

But to be blunt, I expected big battery claims from Apple. We already knew it was able to extract more performance per Watt than Intel can and that translates directly to battery life. What I was not expecting is just how bullish the company would be about performance.

Since the M1 is based on the Arm architecture, Apple needs an extra software layer to run apps designed for Intel chips — it’s called Rosetta 2. The very idea of emulated x86 apps on an Arm processor gives me hives. The experience of emulated Intel apps inside Arm on Windows is not great. But Apple says that for certain graphically-intensive apps it can get better performance on an app running through Rosetta 2 than it did on an equivalent Intel chip.

More than that, after the event I expected to hear warnings about certain apps not working or heavy apps running a little slower when translated through Rosetta 2. Or at least a small lowering of expectations for performance on those apps. When Steve Jobs introduced the original Rosetta back in 2005, the slide behind him said it was “Fast (enough).”

This year? No such caveats. Apple is boldly putting forth an “it just works” message on these kinds of apps — which will make up a majority of the third party apps I think most people will be using in the first year or so of this transition.

Most of all, the fact that Apple has ceased selling the Intel version of the MacBook Air is what astonishes me. The Air is Apple’s best-selling Mac by far and it is coming off a quarter where Apple made more money on Macs than it ever had before. Rather than hedge its bet, it’s replacing its most popular computer with this new system.

I have to admit I made an error in my thinking ahead of the event about the base, 2-port 13-inch MacBook Pro. It wasn’t moving the Pro to the new chip that would signal confidence, it was the Air, Apple’s most popular laptop. My mistake is that I think of it more as an entry-level Pro machine when it’s probably better to conceptualize it as a beefier version of the Air. That’s certainly true with the new M1 version — the only significant performance difference is that the Pro has a fan. Apple continues to sell Intel versions of it, as well.

There’s a lot more to say about these systems. The fact that they cap out at 16GB of RAM and two Thunderbolt ports doesn’t faze me, for one thing. Apple is starting at the lower-end of its Mac lineup, so it felt there wasn’t a need for more. I am confident future Apple chips will be able to support more.

I’m less sure what the plan will be for graphics. The M1 chip has an integrated GPU, and on Intel machines that usually means sub-par graphics. We’ll need to see what the reviews for these machines say, but again Apple is exuding confidence. Going forward, though, I do wonder whether discrete GPUs are in the cards, especially since Apple is also touting the benefits of sharing RAM across both the CPU and GPU in its integrated system.

Those are all interesting questions, but Apple has two years to answer them — that’s how long it says this transition will take. Right now the company is already selling and will soon be shipping these new computers. I can’t wait to see if Apple’s confidence is justified by the performance and battery life of these computers. If it is, the M1 chip will be a huge indictment of Intel, Qualcomm, and even Microsoft — each for different reasons.

It’s been a long time since a company has both promised and then delivered a step-change improvement in laptop computers. As of this moment we have a big promise, now let’s see if Apple can deliver.

┏ Apple HomePod mini review: playing small ball. Dan Seifert is impressed, but also notes that this thing requires that you and everybody you live with really be fully enmeshed in Apple ecosystem if you want to get the most out of it.

Fast-forward to now and Apple’s new smart speaker, the $99 HomePod mini, takes a different approach. It’s smaller, simpler, and way less expensive than its bigger sibling, and thanks to Apple’s work on Siri over the past few years, it can actually do more than the original when it launched.

┏ Mac users couldn’t launch apps this afternoon after Apple verification server issue. Quite a remarkable thing that happened! The idea that you can’t launch the apps you downloaded on your computer because they can’t check in with Apple to see if they’re okay is, well, it’s a thing. The fact that this thing involves software literally called “Gatekeeper” really does hit on the nose, don’t it.

I could have many emotions about owning and controlling the computer you paid money for (and I do) and further emotions about whether and when it’s appropriate for Apple to require code signing and other safety checks on Macs (and I do). Instead, I will just point out that these failures were egregious because when they happened, our Macs didn’t tell us why things were broken. There was no clear indication of what was wrong nor was there an elegant fallback solution.

┏ This leaked icon may show what Apple’s rumored over-ear headphones look like.

┏ macOS Big Sur is now available to download. My advice: wait. That used to be the standard advice for all OS updates but in recent years it became a little more normal to install day one. This year the changes are big enough that I think it’s safer to wait and see if your apps work well — or rather, to wait and let other people figure that out before you’re forced to.

┏ All the apps and games Apple promises for Arm-based Macs.

┏ Some of the new MacBook Air function keys have different functions. I’m particularly happy about this. One-button access to search is key for me (pun not intended), and I am glad that it’s faster to get to Do Not Disturb. But making Dictation a top-level feature is a big win for accessibility and I hope that becomes more common across all keyboards.

┏ Google Photos will end its free unlimited storage on June 1st, 2021. There has been lots of ire over this change, but I will give Google some credit for making it in a way that is transparent and not totally disruptive. The counter on your cap doesn’t start until after June 1st and it only counts things you upload after that. Google is making more tools to give you transparency on what’s eating your storage and clever ways to clear it out.

Still and all, Google Photos was a free product that pushed a lot of other excellent products out of the market. Then, after they were gone, Google begins charging. I’m not saying there’s a direct cause and effect in that timeline, but it’s hard not to look at the timeline and feel bad for any tech company that isn’t one of the big ones.

┏ The best PS5 and Xbox Series X games to play at launch.

I’ve spent a day or so using the remote and it’s a nice little addition, although not all of the apps seem to be optimized for it. In the YouTube app, for instance, you’ll see button prompts that reference the DualSense instead.

┏ Inside the final days of Quibi. Julia Alexander and Zoe Schiffer:

There was the time Pitbull dropped by, dressed in a white linen suit, and employees craned their necks to get a peak. The time her boss hadn’t been notified that Emily Blunt and Reese Witherspoon were in the office — an omission she called “the ultimate betrayal.” The times she’d swiped Goldfish and Snapple for her commute, taking advantage of the heaps of free snacks, which also featured nitro cold brew and flavored seltzer.