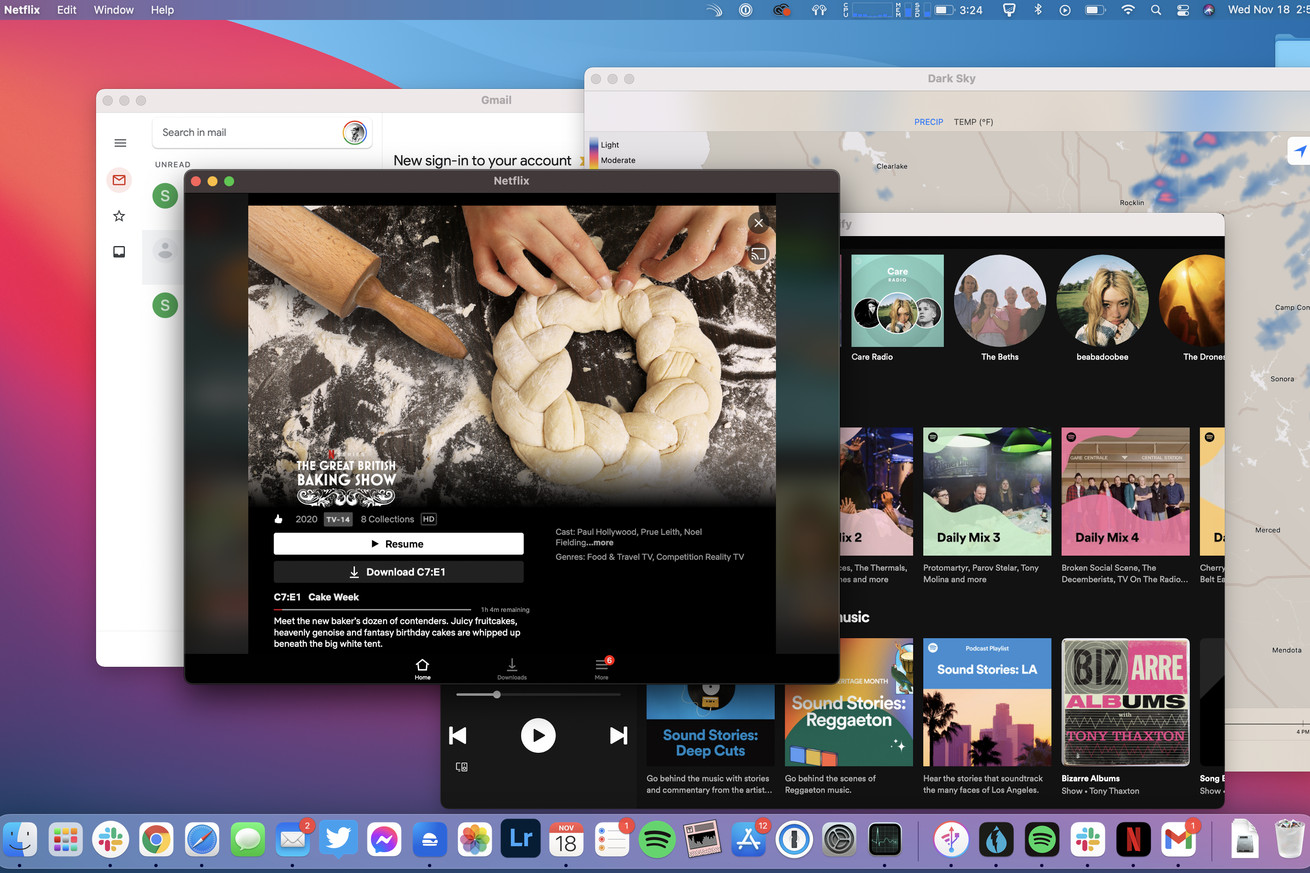 Earlier today, MacRumors reported that it is possible to run any iOS app you have purchased on an M1-based Mac, provided you can get access to the right file. Sure enough, if you’ve purchased or downloaded an app for your iPhone or iPad, it is possible to get it running on an M1-based Mac — I am currently looking at the iOS versions of Dark Sky, Spotify, Slack, Netflix, and Gmail on this MacBook Air.

Running some of these apps, it’s fairly clear in some cases why these developers haven’t immediately made them available for the Mac in the Mac App Store. Netflix, for example, is bounded inside a window and can’t be resized or go full screen (but it works, and you can even download videos for offline viewing). Instagram is relatively small on the screen, but it also runs fine, you can post, and it seems to hook into the right photo library and camera permissions. Many of these apps require Apple’s “Touch Alternatives” system to work.

To get these apps running, you just need to get the app files, which are simply packages with the .IPA file extension. And these files need to be associated with your Apple ID, so you can’t just share them around to other people.

A long time ago, IPA files were easy to find in an unencrypted iTunes backup, but that’s no longer the case. Instead, you can use a long-standing Mac app called iMazing to directly download legitimately purchased IPA files to your Mac. Simply double click them and they install into your applications folder like any other app so long as your Mac and iPhone are on the same Apple ID.

We’re far for the first to discover this. MacRumors reported it and the first place I can find confirmation is this post by redditor probablyamy, who also explained the step by step process.

1. Plug-in device to Mac with iMazing running
2. Select “Apps” for the iPhone plugged in to your Mac
3. Select “Manage Apps” in the tabs at the bottom
4. Select “Library” in the manage apps screen
5. Download the apps you want
6. Right click on the downloaded app in the list -> Export ipa
7. Double-click the .ipa file on an M1 Mac to run install it.

Having run into some bugs myself with earlier versions of iOS apps ahead of the review, I will tell you that there are quite likely to be even more bugs with this method — both inside some of these apps and possibly even with your macOS system. This is more something to play around with than it is something you should consider for any important apps that you use.

Apple’s policy is that the only approved way to install iOS apps is to get them from the Mac App Store and the only way for developers to distribute iOS apps to Mac users is via that same store. Which means this method may or may not continue to work down the line.