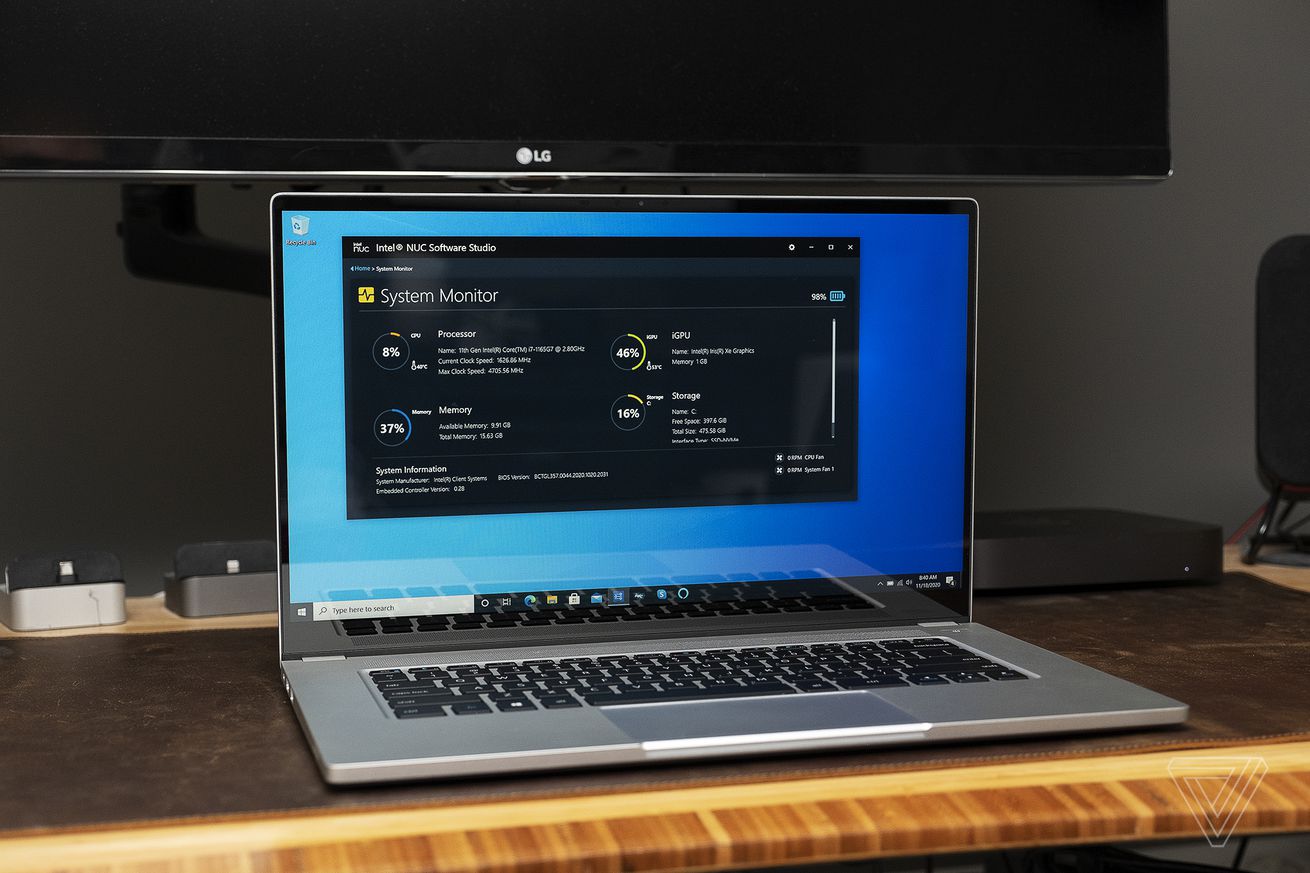 Intel is launching a new laptop. Yes, that’s right, Intel itself has a new laptop that it designed in-house and will be selling through various partners early in 2021. The NUC M15 is the latest computer in the company’s expanding Next Unit of Computing line, which is best known for making tiny desktop PCs.

You won’t actually see Intel’s name stamped on the lid, however. That’s because Intel is essentially supplying this laptop to boutique shops that will equip it with various storage configurations and brand it themselves (a process known in the industry as “white labeling”). This isn’t the first time Intel has done this: a little over a year ago, it produced the MAG-15, a gaming laptop that was sold by a number of smaller brands across the world, including Schenker in Europe and Eluktronics and Maingear in the US.

The NUC M15 is a different beast, however. Instead of targeting a gaming enthusiast crowd that is looking for impressive performance and cooling for an attractive price, the M15 is very much a premium productivity laptop. It’s got a 15.6-inch, 1080p IPS display (available with or without touch), a 73 watt-hour battery that Intel claims is good for up to 16 hours of use, and Intel’s 11th Gen Core i5-1135G7 or i7-1165G7 quad-core processor. Instead of a discrete graphics card from Nvidia, the M15 uses Intel’s Iris Xe integrated graphics. You’ll be able to get it with 8 or 16GB of RAM (soldered, so not upgradeable after purchase) and a variety of storage configurations, depending on which brand is selling it.

All of that is packed into an aluminum unibody that’s 14.9mm thick (0.59 in) and a stout 3.64 pounds (1.65 kg). The fit and finish are right up there with what you’d expect from a premium laptop, even if the visuals are a bit boring. (Intel says is it using Tongfeng as its manufacturing partner for the M15, the same one it used with the MAG-15.)

A standard, well-spaced chiclet keyboard is centered under the display with a large glass Windows Precision trackpad just below it. There are two Thunderbolt 4 / USB 4 Type-C ports, two USB-A 10Gbps ports, a 3.5mm headphone jack, and a full-size HDMI port along the sides. The two USB-C ports are on opposite sides, and you can charge from either one of them, which is convenient. The only thing that’s missing is an SD card slot.

If those specs sound familiar, it’s because they are effectively the same as the Asus ZenBook 14 and Dell XPS 13 we recently reviewed, plus countless other thin-and-light productivity laptops released this fall. The major difference with the M15 is that it has a 15-inch display; most productivity laptops have 13- or 14-inch screens on them, while 15-inch models tend to be costlier and more performance-oriented.

There are some other slight differences, such as an LED light bar in the front that works with the Alexa app for Windows. The light bar will glow blue when it hears you say the Alexa voice command, just like an Echo smart speaker. Four microphones installed along the top edge of the lid help the M15 pick up your voice from across the room.

The M15 also has a Windows Hello-compatible webcam for facial login, plus presence detection that will wake the computer up as you approach it and log you in automatically. It will also keep the computer unlocked so long as you’re sitting in front of it. It’s similar to what we saw on the Dell Latitude 7400 last year.

Intel says its goal with this computer is to provide a premium-level laptop to smaller companies so that they can compete with the Dells and HPs of the world without having to invest in the level of R&D that those companies have. The company described the M15 to me as “a premium product above the mainstream, but still targeted towards the average user” and that it is “optimized for a variety of use cases.” It says it saw “an opportunity for higher end premium laptop with a larger screen, thin and light with unbelievable battery life” in the market, and it designed the M15 to fit that.

The M15 technically isn't labeled with Evo branding, which denotes a certain level of performance and features, including over nine hours of battery life, fast charging, Thunderbolt 4, Wi-Fi 6, and instant wake. But it is built to meet that specification, and Intel expects its partners to submit their finalized, branded machines for Evo certification. As for driver support, Intel says its goal is to provide support for anything it is involved in, which takes another burden off of small companies with limited support resources.

The company also tells me that it plans to bring more NUC laptops to market in the future and that it won’t become a once-per-year type of thing. But it also says that it doesn’t expect to have a full-range product stack like Dell or HP and that any models it does design and sell will be targeted to specific use cases.

Intel isn’t divulging the brands that will eventually sell the M15 early next year, but it’s likely that many of the companies that sold last year’s gaming laptop will participate, and Intel has hinted that it expects even more boutique brands to carry the M15. Intel also says its partners will ultimately determine the selling price, but it expects prices for the M15 to range between $999 and $1,499, depending on configuration.

That pricing is important because, unlike last year’s gaming-focused laptop, there really isn’t much that makes the M15 stand out from the extremely crowded productivity laptop field. The design is best described as a reference model, with a heavy-handed influence from the 2012–2015 MacBook Pro; the specs are not any different from what you can get from countless other brands; and it can’t lay claim to the thinnest or lightest package you can get, an important quality for many laptop buyers in this segment. In some respects, such as its 16:9 display, the M15 already feels behind the curve, as many companies have shifted to taller 16:10 or 3:2 screens that are easier to work with tall documents or webpages on. It also has two fans, unlike Apple’s new MacBook Air that can handle professional work in complete silence.

Last year’s MAG-15 was far from perfect, and it had an equally generic design. But it was interesting to gaming enthusiasts because it had an advanced cooling system, excellent performance, great build quality, a light chassis, and shockingly good battery life for a gaming laptop. It’s hard to find that exact mix of qualities from the name brands in the gaming space. As a result, many enthusiasts were able to get past the fact that it wasn’t made by a known brand, such as Alienware or Razer, because they could get a unique mix of features and top-tier performance at a discount. (I should know; I personally bought a MAG-15 last year for this very reason.)

The productivity laptop market is wildly different from the enthusiast gaming world, though, and without any standout performance qualities aside from its slightly larger screen, it’s hard to see why anyone would buy the M15 from a brand they never heard of instead of just getting a tried-and-true Dell XPS 13 or HP Spectre x360. The M15 is likely to be a perfectly competent laptop — there are no glaring faults that I can see from the list of specs and features, and the pre-production unit I was able to try out ahead of today’s announcement seems mostly fine — but that’s not likely to make the average person choose it over another model.

The pricing that Intel has set expectations for is premium level, but it is a little lower than similar configurations from the big names. It’s definitely lower than you typically pay for a premium 15-inch laptop, though those generally come with higher-end processors, discrete GPUs, and higher resolution screens than the M15 has.

We should have a better idea of how well the M15 fares in the near future, once we have the ability to put a unit through its paces. Until then, this will be something to watch.