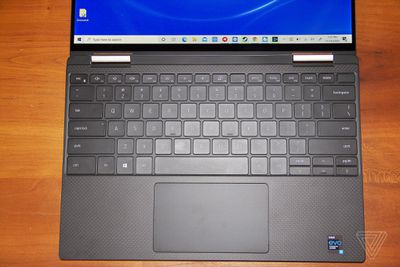 So it’s forgivable to hear about a “Dell XPS 13 2-in-1” and assume it’s a run-of-the-mill XPS 13 that you can flip around. But the XPS 13 2-in-1 is very much a laptop of its own, with a different set of trade-offs and considerations from its clamshell counterpart. In some areas (like graphics performance), the convertible is a step ahead of the standard XPS; in others (like the keyboard), it’s compromising a bit. The best model for you depends on the type of tasks you’re looking to do.

Before getting into that, I’ll give you a brief rundown of what’s new from the last XPS 13 2-in-1. It’s mostly one thing: the processor. This 2-in-1 (the 9310) includes Intel’s newest 11th Gen “Tiger Lake” mobile chips. The CPUs bring Intel’s best-in-class Iris Xe integrated graphics, which have been the talk of the town since Tiger Lake’s launch, as well as the Thunderbolt 4 standard. This 9310 is actually certified through Intel’s Evo program (denoted by a small sticker on the right palm rest), which is supposed to guarantee that a laptop meets the needs of an everyday home or office user, in categories from connectivity to battery life and performance.

Apart from that, the new 2-in-1 has largely the same look as its predecessor and the clamshell XPS, complete with a slim and sturdy aluminum chassis, a 1920 x 1200 (16:10) Gorilla Glass screen, and four ports (two USB-C with Thunderbolt 4, DisplayPort, and Power Delivery, one headphone jack, and one microSD card reader). Dell has made a few tweaks as well: the webcam now supports Windows Hello, there’s a new “frost” color option, RAM has been bumped from 3733MHz to 4267MHz, the touchpad is quieter, and there’s an updated microSD reader that Dell says will deliver better performance. That’s all well and good, but the processor is the star of the show here — and it is a star.

For general performance, the 1165G7 handled my office workload, which includes a dozen-ish Chrome tabs, a few other apps like Slack and Spotify, and some downloading, file copying, and other office-y stuff in the background, with no problem. I never heard the fans spin up or felt any heat unless I was running an intense program. This is the experience you’ll have with any machine with an i7, but you certainly aren’t sacrificing any performance for this convertible form factor.

Heavier media work is where this system starts to stand out. The 2-in-1 took 10 minutes and 5 seconds to export our 5-minute, 33-second 4K video in Adobe Premiere Pro. That’s 38 seconds faster than the regular XPS 13 — effectively comparable. Both systems are faster than any 10th Gen Ice Lake laptop with integrated graphics, and they beat the Asus ZenBook 14 with the same processor (which took 11 and a half minutes). They also both lose out to the Arm-powered MacBook Air (which doesn’t even have a fan) and MacBook Pro, which finished the job in 8:15 and 7:39, respectively.

Where the 2-in-1 really differentiates itself from the clamshell, though, is gaming performance. You can actually play a fair number of games on this laptop without needing to bump the resolution down. The 2-in-1 smoked the clamshell on Rocket League’s maximum settings (an average of 120fps, to the clamshell’s 111fps) and League of Legends (226fps to the clamshell’s 205fps). You’ll only see 60fps on either XPS 13 since that’s the maximum their screens can display, but those results show how much higher Dell has clocked the 2-in-1 over the standard XPS.

The 2-in-1 is putting up such impressive numbers that there are actually games where you’ll see better performance than you will on the clamshell. It breezed through Overwatch’s Ultra settings, averaging 71fps. That beats the standard XPS 13, which averaged 48fps on the same preset — a difference you’ll notice in gameplay. It also beats Lenovo’s IdeaPad Slim 7 with AMD’s eight-core Ryzen 7 4800U, which put up 46fps and actually isn’t too far off a system I tested with the most powerful Tiger Lake processor (the Core i7-1185G7) which averaged 89fps.

The really exciting news is that you can actually play Shadow of the Tomb Raider on this machine at 1080p. The 2-in-1 averaged 36fps on the game’s built-in benchmark (at the lowest-possible settings). That’s just two off from the newest MacBook Air with Apple’s M1 chip (38fps), which has been outperforming 1165G7 systems across the board. Now, you may very well not want to play demanding titles like Shadow of the Tomb Raider at 38fps, but you can play them on this machine without feeling like you’re watching a flipbook. That’s a big accomplishment for these integrated graphics, especially considering that the standard XPS 13 only averaged 22fps on the same benchmark.

The convertible’s cooling system is being pushed to its limit

Similar to that of the clamshell XPS, however, the convertible’s cooling system (including two fans, hidden vents in the hinge, and what Dell calls “an ultra-thin vapor chamber”) is being pushed to its limit during these high-intensity tasks. During the Premiere Pro export and my gaming sessions, the CPU spent some time in the high 90s (Celsius) and even hit 100 a few times. This may cause problems for the XPS form factor down the line if Intel doesn’t make significant gains in efficiency. On the plus side, the keyboard and touchpad never got hot at all. (The keyboard got toasty on the clamshell.)

So the 2-in-1 gives you better graphics performance than the standard XPS (as well as a convertible form factor) for just a slightly higher price. What’s the catch? There are two worth considering.

The first is battery life. I averaged eight hours and 50 minutes using the 2-in-1 as my primary work driver with the screen at 200 nits of brightness. That’s quite good among the Tiger Lake systems we’ve seen so far, and it means you should get a full workday from one charge. But it’s a bit worse than the standard XPS, where I usually saw nine hours and 15 minutes — a small difference but one that could be important to students or frequent business travelers who are looking for every ounce of juice they can get.

The second trade-off to consider is the keyboard. The standard XPS 13 has one of my all-time favorite laptop keyboards; it’s snappy, quiet, and comfortable, with a really nice texture. The 2-in-1 has a different keyboard that Dell calls the “Next Gen MagLev keyboard.” It has wider keycaps with just 0.7mm of travel. It feels similar to using the old low-profile butterfly keyboard on the 2019 MacBook Pro. Personally, I hate this. Typing on the convertible feels like slamming my fingers onto flat plastic. But I begrudgingly acknowledge that some people (including Verge deputy editor Dan Seifert) prefer these kinds of keys.

Overall, the XPS 13 2-in-1 9310 is an excellent Windows convertible. It keeps the slim, sturdy, premium build quality that makes the XPS line the best of the best while also delivering some of the best performance you can get from an ultraportable laptop. It’s a formidable competitor to Apple’s groundbreaking MacBooks, especially if you’re looking for a touchscreen and a convertible form factor.

If you’re deciding whether to buy the XPS 13 or the XPS 13 2-in-1, the differences are simple — but they’re also significant and worth thinking about. The convertible form factor is the most obvious distinction, but I would argue it’s not the most important one (unless your job requires tablet use). You’ll be using the keyboard a lot, so you’ll want to figure out which one you prefer (if you’ve used MacBook butterfly keyboards and other MacBook keyboards, those are a rough approximation). You should also consider the sorts of tasks you’ll be putting your system through and whether a significant increase in graphics performance (especially with demanding games) is worth giving up a bit of battery life. And of course, there’s the $400 price difference.

Anyone who’s considering an XPS 13 and thinks they might prefer a convertible should definitely consider the 2-in-1. Just don’t assume they’re the exact same package.

Photography by Monica Chin / The Verge