The best Cyber Monday deals that you can already get 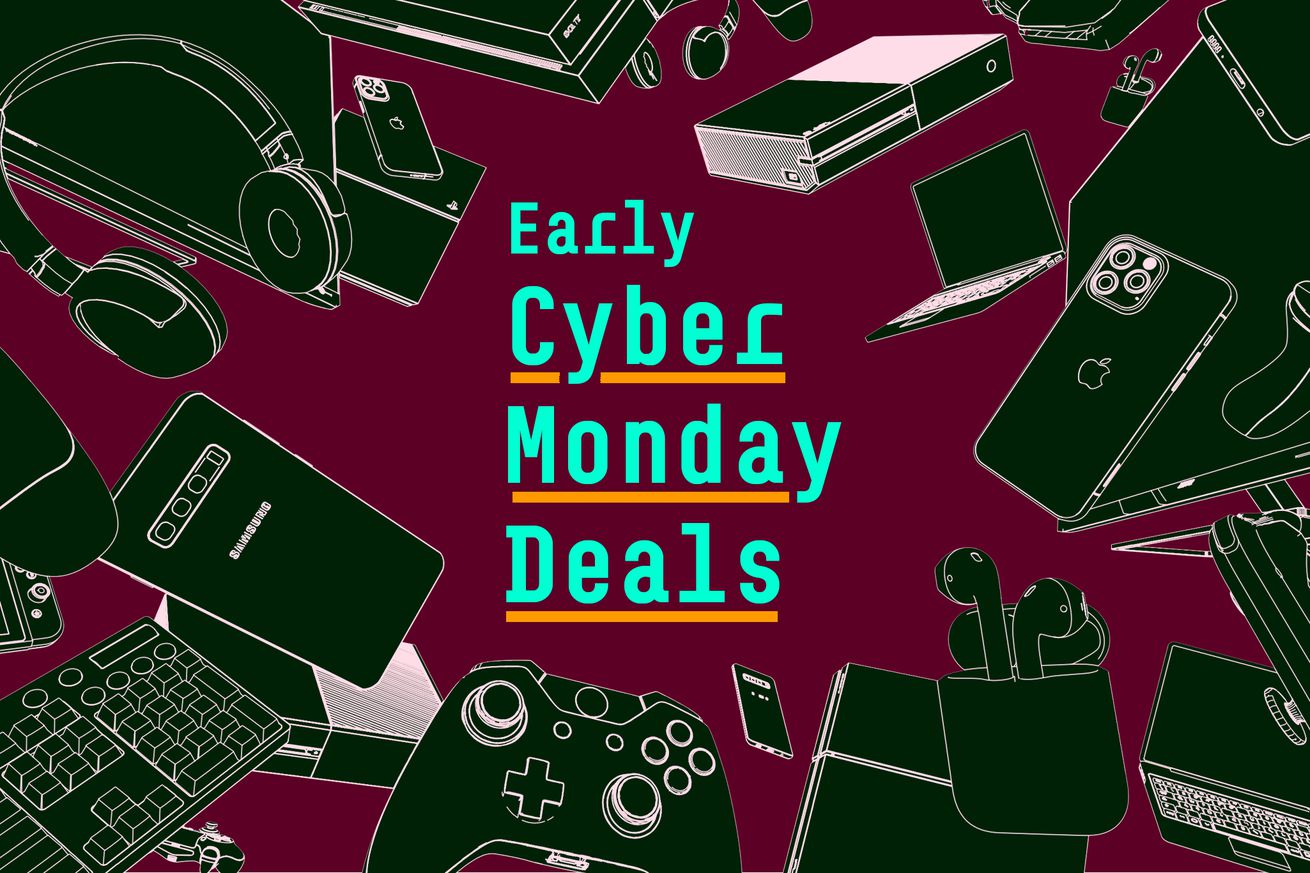 Cyber Monday is upon us. The big finale of the busy shopping weekend will officially happen Monday. But if you’ll be busy with work or whatever else, there’s some good news today: You can get a lot of the best Cyber Monday deals early. More and more retailers have lifted the veil on their new deals earlier than ever, and we’re focused on adding them here. As you’re expecting, there are some great deals on TVs, laptops, tablets, smartwatches, video games, and much more.

We’ll be doing our best to keep this post updated ahead of Cyber Monday, and we’ll be back all of next week to give you as many chances as possible to get everything on your holiday wish list.

Target is blowing the rest of the major retailers away with a $50 price cut on the Apple Watch SE (GPS, 40mm), costing $230 while others are selling for $260. The 44mm-sized watch is $260, which also beats the lowest price yet.

Apple’s AirPods with a wireless charging case costs $140, which is officially the lowest price. These have been selling for $150 throughout Black Friday, but this early Cyber Monday deal is live now at Amazon.

The Galaxy Buds Plus dropped another $10 at Amazon, down to $100 from their original $150 price. Other retailers are holding steady at $110, at least for now.

Whether you’re in the market for a set of wireless earbuds, noise-canceling headphones (or both!), Cyber Monday is delivering the goods with the best deals we’ve seen yet for models like the Apple AirPods, Samsung’s Galaxy Buds Plus and Buds Live, the Sony WH-1000XM4 headphones, and many more.

Several TV models are discounted for Cyber Monday, but only a few of them are likely worth your money. We’ve plucked a few particularly good deals out from the bunch. There are very affordable TVs that have Amazon’s Fire TV software built-in, as well as more high-end options like QLED and OLED TVs that are best paired with a PS5 and Xbox Series X for gaming (or just if you want the best picture quality and contrast for TV shows and movies). Also, we’ve found deals on big-screened TVs that are cheaper than ever.

Laptops are always useful, but they’re especially handy to have amid the pandemic. Whether you’re planning to use one for school, work, or just to have fun browsing or gaming, we’ve selected some standout laptop deals.

If you’re looking to get a fitness tracker, or a smartwatch to funnel notifications to your wrist, Cyber Monda is serving up some deals you’ll probably take interest in. The latest models from Fitbit and Apple are present here, and you’ll find those below.

The Apple Watch SE was already somewhat affordable at $279, but it’s even cheaper at Target. It’s $50 off, letting you score the 40mm GPS version for $230 or the larger 44mm Watch for $259 at Target. Each size looks similar to the more expensive Series 6 but lacks the always-on display and a few other features.

For Black Friday and Cyber Monday, Amazon’s latest batch of ball-shaped Echo smart speakers, including the fourth-generation Echo and Echo Dots, are cheaper than ever. These feature better sound performance than the previous iteration.

Google’s latest Nest Audio speakers are available as a duo for $170, knocking $20 off the usual price for buying two together. These can be paired for a stereo arrangement for music and podcasts, and at some point, you’ll be able to use them as a home theater setup with Chromecast.

We’ve been enjoying this Sonos Move deal that drops the price from $400 to $300 for the first time. This speaker supports Bluetooth for on-the-go or outdoor listening, as well as Wi-Fi connectivity to let it give your other Sonos speakers a boost.

If someone close to you, be it a friend or family member, is into video chatting via Facebook, a Facebook Portal device might be a good gift. There’s a range of devices available for less than usual, starting at $65.

If you’re a Prime subscriber and heavily invested in Amazon’s services, an Echo Show smart display might be the best choice. You can get the Echo Show 5 for just $45, and it comes equipped with a camera for video chats. It’s tough to beat when it comes to value.

Google’s Nest Hub smart displays are great if you like to watch YouTube, or have a big Google Photos library you want to show off on their screens. The smallest Nest Hub starts at $50, though only the larger Nest Hub Max can make video calls.

There are a handful of great deals on unlocked phones like the Google Pixel 5, Samsung Galaxy S20 FE 5G and OnePlus 8 for Cyber Monday, and a few more that are worth exploring if you’re in the market to upgrade with your carrier. In case you’re hoping to find iPhone discounts, Apple is offering a $50 gift card with the purchase of one.

If you’re on Verizon and don’t mind activating a phone on Verizon to get a deal, you can save an extra $150 on top of that $50 discount at Best Buy. You can either opt to pay $500 for the Pixel 5 or $20.86 each month for 24 months through a Verizon device payment plan. Taking $200 off the Pixel 5’s regular price is great. You’ll just need to keep the phone on Verizon service for 60 days before it becomes unlocked.

At the OnePlus site, you can get the standard OnePlus 8 for $200 off its usual price, costing $599. B&H Photo is actually offering a slightly bigger price cut of $230 off. This phone shares a few similarities to the 8 Pro, like the Snapdragon 865 processor, 12GB of RAM, and 256GB of storage. Though, it doesn’t have wireless charging and its camera array doesn’t quite stack up as favorably. Also, it has a 90Hz refresh rate display compared to 120Hz on the 8 Pro, and the display itself is smaller (about 6.5 inches versus 6.8 inches).

Speaking of the OnePlus 8 Pro, Amazon recently knocked an extra $50 off the Black Friday sale price.

The Pixel 4A with 5G is $200 off when new customers purchase it through the Google Fi MVNO service, resulting in a $299 final price. If you’re an existing Google Fi subscriber, you can upgrade to the 4A with 5G and get $150 off, knocking the price down to $349. Not bad, considering that’s the same price as the standard Pixel 4A that doesn’t have 5G support.

Until December 7th, Visible (owned by Verizon, operating on Verizon LTE) will give you a complimentary set of AirPods Pro with the purchase of any phone in the iPhone 12 series. The catch is that you’ll need to buy the phone and port your number to a new line in the same transaction.

For new and returning customers (who haven’t subscribed in the last three months and who haven’t taken advantage of last year’s promo), you can get on Hulu’s ad-supported streaming plan for just $1.99 per month for a full year. After that, your monthly rate goes back up to $5.99.

1Password is offering an exclusive offer to readers of The Verge until Thursday, December 3rd. You can save 50 percent each month on the cost of a family subscription (up to five people, and not restricted to a single household) to 1Password’s services, costing $2.50 per month for up to one year. After that year is up, you’ll be charged the regular $5 per month rate.

It doesn’t cost much to get a soundbar, and thanks to Black Friday and Cyber Monday, it’s cheaper to get a particularly great setup. This list isn’t exhaustive, but we’ve picked out a few soundbar models that we like, and ones that are cheaper than usual.

Unless you own a smart TV or a modern gaming console, you’ll probably want a streaming device to bring all of your favorite TV shows and movies to your television. Thankfully, you have plenty to choose between, and many options are discounted for Black Friday and Cyber Monday.

Tablets are also worth considering if you need a tool for school, leisure, or to unwind on. From Amazon’s very affordable Fire tablets to the mid-range and high-end iPad models, we’ve included a little bit of everything, as well as accessories to help you get the most out of your purchase. Also, if you like to read and are interested in great Kindle e-reader deals, you’ll find those below as well.

While there are no PS5 or Xbox Series X/S deals to speak of, that doesn’t mean there aren’t other great price cuts. In fact, for the Nintendo Switch you’ll find the best prices yet on first-party games and accessories. Plus, new releases for the Xbox One and PS4 (several of which include free next-gen upgrades) are discounted.

It’s always a good time to make some smart upgrades to your PC. And while that’s usually a costly endeavor, Cyber Monday is making some of it a little cheaper. You’ll have to continue your search for an Nvidia RTX 3080 another day, but for now you can save on monitors, storage and peripherals.

You can add some smarts to your home with a smart speaker, and you can go even deeper with tech like a smart lock for your door, a Wi-Fi-connected security cam, and an alarm kit. This can be expensive to do, but as you probably guessed, it’s a lot cheaper to outfit your home with these upgrades now that Cyber Monday is here.

One of the most practical upgrades you can make for yourself this weekend. Get a mesh Wi-Fi system if your current router isn’t cutting it in terms of speed or signal strength. A multi-router system casts a wide net of connectivity, so you’ll experience far fewer slow or drop-out zones. And if you have several people in your home — each using several devices to their name — there’s even more reason to make the upgrade.

A number of retailers are selling the DJI Osmo Action for $199, a discount of about $50 from its regular price. The Osmo Action is similar to GoPro’s line of action cameras, and comes with both front and rear facing screens.