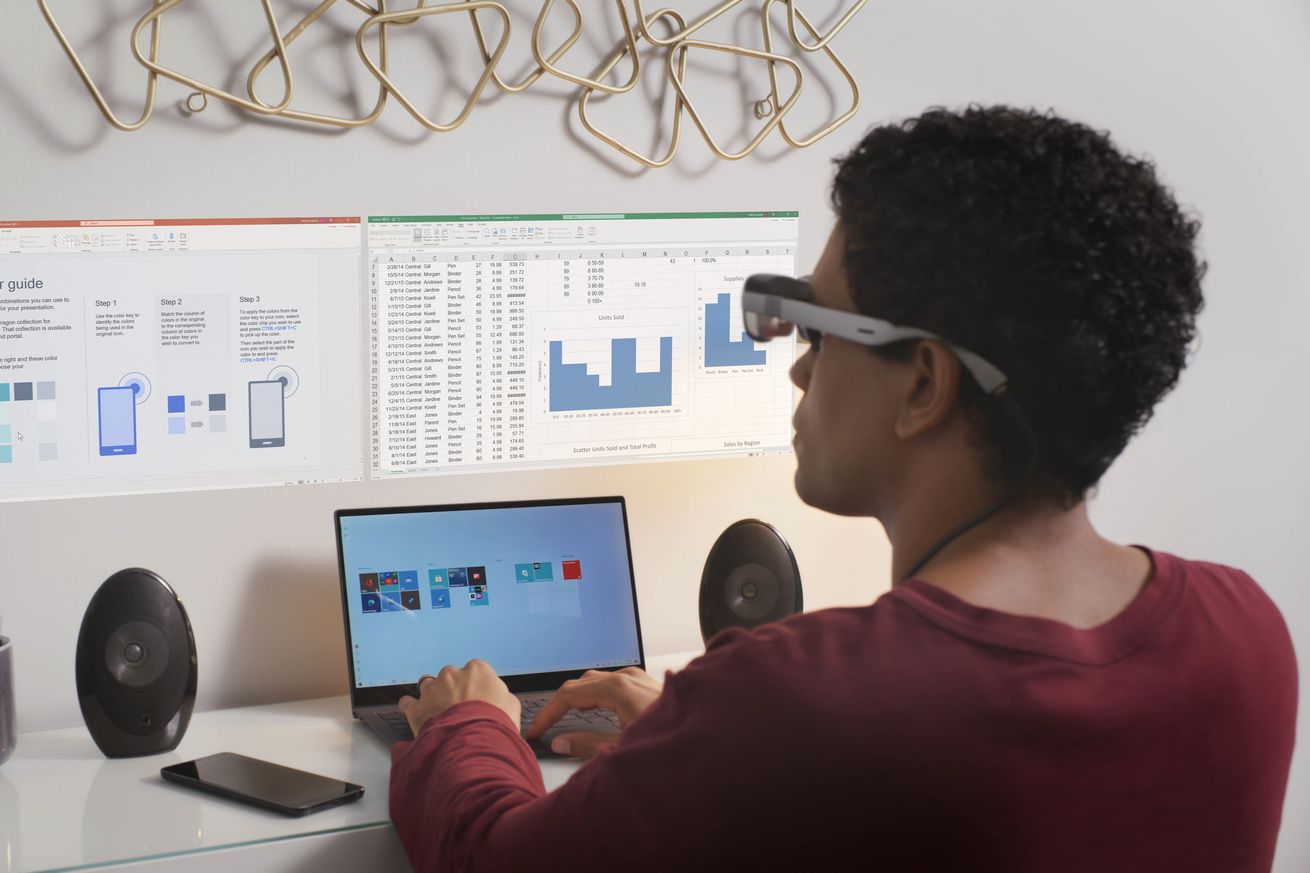 Chip maker Qualcomm has introduced a new reference design for augmented reality glasses: an AR “smart viewer” you can tether to a phone or PC via USB-C. Called the XR1 Smart Viewer, the system is meant to be lightweight and look (sort of) like sunglasses, while also enabling features like hand tracking and spatial awareness. The first glasses based on its design are set for release in mid-2021.

The XR1 is designed as a consumer-focused “must-have accessory” for phones and computers, rather than a self-contained product. It uses two 1920 x 1080 OLED displays with a 90Hz refresh rate, plus an array of cameras, to add a virtual overlay to the real world. The camera array can also support hand tracking as a control scheme, and it can detect planes in the environment, so you can do things like pin a virtual window to a wall for multiple PC displays — or place a virtual object on a table and interact with it through gesture controls. Like most AR glasses, however, they have a relatively limited field of view of 45 degrees, which is roughly similar to the Microsoft HoloLens 2.

The XR1 Smart Viewer is distinct from the Snapdragon XR1 or XR2 platforms — a pair of chipsets that are optimized for virtual and augmented reality glasses, including last year’s XR2-based Oculus Quest 2. It’s designed to perform some tasks using built-in electronics, but it offloads other tasks to an external computing device, allowing for a more lightweight design.

The first Smart Viewer-based glasses could launch in mid-2021

Qualcomm has spent the last couple of years pushing for AR glasses adoption, which it thinks could stimulate the nascent 5G cellular market by popularizing high-bandwidth mixed-reality apps. It’s previously partnered with Chinese company Nreal on the Nreal Light, one of the only consumer-focused AR viewers — which plugs into a Qualcomm Snapdragon 855- or 865-powered phone. The Nreal Light launched late last year in Korea and Japan, and yesterday, Nreal announced that it will arrive in the European Union and the US later this year.

So far, AR glasses have struggled to reach the mainstream. However, the ThinkReality A3 and any other XR1 Smart Viewer-based products may end up competing with a couple of major companies. Facebook announced its impending entry into AR hardware last year, and it’s planning to release a set of Ray-Ban smart glasses with limited AR-like features later in 2021. Apple is also rumored to be making a high-end AR / VR headset aimed at building a developer ecosystem.