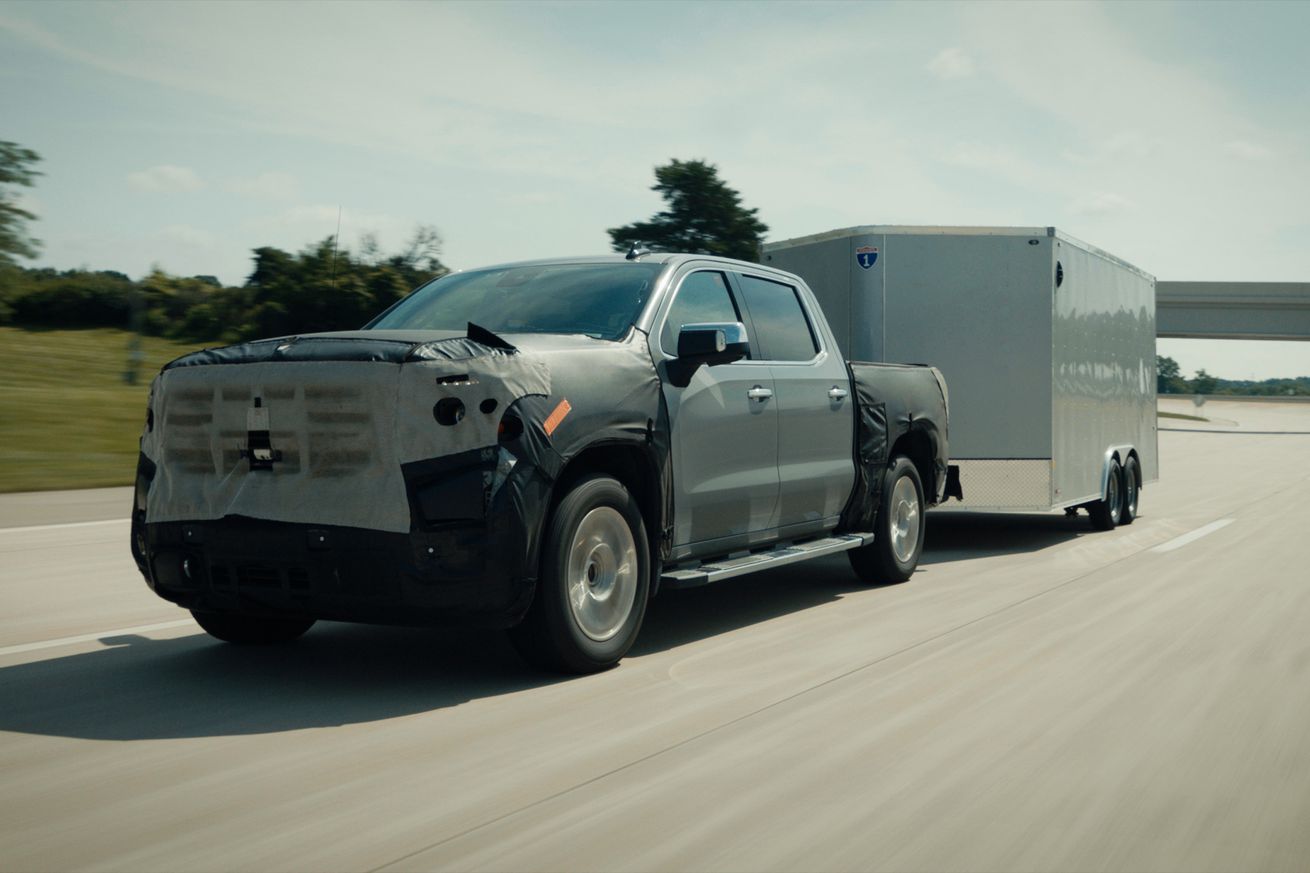 General Motors’ Super Cruise, one of the best advanced driver assist systems on the market, is getting a big upgrade for 2022 and will be available on way more vehicles — including, for the first time, the Chevrolet Silverado and GMC Sierra half-ton pickup trucks.

To test out the new stuff, GMC had me out to GM’s Milford Proving Grounds to play with the new Super Cruise on the facility’s 4.5-mile banked circle track. Security at the facility is tight and our cameras were either confiscated or, in the case of my iPhone, covered in obnoxious red security tape.

I soon understood the need for security when I spotted what appeared to be the upcoming 2023 Z06 mid-engined Corvette being tested, a whole bunch of GMC Hummer EV pickups and, curiously, a Tesla Model Y. (GMC wouldn’t say why, but I assume it was to check out the competition.)

There are three main new capabilities to the 2022 variant of Super Cruise, and I got to test two of them:

I took the Sierra out onto the facility’s “highway” and a GM engineer followed in a chase car. After setting Super Cruise to 70mph, I settled in for a nice hands-free drive in a large circle.

Super Cruise, which debuted in 2017 in the Cadillac CT6 sedan, is capable of completely hands-free driving across more than 200,000 miles of divided highway across North America. It compares the vehicle’s position, taken from both GPS and on-board cameras, to its location in a lidar scan of the world. Once the vehicle knows where it is, and that it’s safe to activate, Super Cruise will take over both steering and acceleration.

The driver is still required to pay full attention

The driver is still required to pay full attention. The car uses an infrared vision system to ensure that the driver’s eyes remain on the road. Look away at your smartphone for too long and the system starts with warnings before disengaging entirely. But if you keep your eyes on the road, you won’t need to touch the steering wheel at all unless there’s a situation the system can’t handle.

And with the updates, you’ll be able to touch the wheel even less. After I pulled onto the highway and set my speed, the chase car sped past, moved into my lane, and then slowed down to less than 70mph. My Sierra noticed this and slowed down to match, but then it began scanning the left-hand passing lane to see if it was safe to move over.

After a moment, the car beeped at me and popped up a message warning of the impending lane change and the vehicle swiftly moved to the left lane while simultaneously accelerating back up to my 70mph set speed. It wasn’t a dramatic move, but it was impressive to watch it in action. After passing the slower car, it moved back into the right lane and continued on.

The truck has four new wide-angle, long-range radar sensors to support the system, one on each corner of the vehicle. GM upgraded the two existing rear / side radars that were there to enable existing blind-spot monitoring features. The existing long-range radar for the adaptive cruise system is carried over. Between the seven different radar sensors, the car has 360-degree long-range coverage of the world around it.

Between the seven different radar sensors, the car has 360-degree long-range coverage of the world around it

2021 Cadillac Escalade models have an older version of the lane change system where the car would change lanes if the driver activated the turn signal (though it didn’t require any interaction with the steering wheel), but this is a significant improvement on that. Just keep an eye on the road, and the car should be able to move around slower cars and trucks in your way.

The new trailering option is more complicated than it might appear at first glance. When you attach a trailer for the first time, the truck asks a series of questions like how long the trailer is. This helps the truck calculate the total length and weight of the vehicle.

While in a normal curve, Super Cruise will stay closer to the inside lane line, which is how most humans drive. With the trailer attached, Super Cruise will instead work to keep the vehicle and trailer dead center in the lane. It’ll also leave more space between you and a vehicle in front (since the truck and trailer will take longer to slow down).

All versions of Super Cruise use mapping data to determine if it should slow down for an upcoming curve. But it will be more conservative with a trailer attached, slowing down sooner and to a lower speed than without.

A Sierra can haul 10,000 pounds without breaking a sweat, and that’s a significant amount of weight to entrust to the computer, but GMC’s engineers say it really works. In my 15-minute demo, I’m inclined to agree with them — though it was the definition of a controlled environment.

Company reps wouldn’t specify pricing nor what trim levels on which Super Cruise will be available. Phil Brook, GMC’s VP of marketing, said the addition of Super Cruise to Sierra was a “democratization of technology” and that they didn’t want to keep it buried at exclusively high trim levels. We’ll see about that, but expect Super Cruise to be an expensive option either way.

GM says the new Super Cruise will be available on a number of different vehicles, including the upcoming GMC Hummer electric pickup, the GMC Sierra and Chevrolet Silverado pickups, the Cadillac Escalade and XT6 SUVs, and the Cadillac CT4 and CT5 sedans. The 2022 Chevrolet Bolt EUV will receive an older version of Super Cruise that doesn’t include the lane change features. Owners of 2021 Escalade vehicles with Super Cruise equipped will also receive the new features in a future over-the-air update.

Of course, this was a contrived test on GM’s own test track. But, given the performance of Super Cruise in our own real-world testing and the company’s conservative, take-it-slow approach to rolling out the feature across its lineup, we expect the new features to work as advertised.

None too soon, either. Arch rival Ford is planning to unleash its own hands-free Level 2 driving system, BlueCruise, later this year starting in 2021 versions of the Ford F-150 pickup and the Mustang Mach-E electric car.

And, of course, there’s Tesla’s Autopilot and the new beta version of its Full Self Driving features which also support automatic lane changes on the highway. However, the Tesla system requires the driver to keep their hands on the steering wheel to confirm that they’re paying attention instead of the completely hands-free driving that the camera-based driver monitoring systems from Ford and GM allow.

Though both Super Cruise and Autopilot have been around for a while, they haven’t been available in any pickup trucks — by far the most popular vehicles in America. The addition of Super Cruise to the Silverado and Sierra, and BlueCruise to the F-150, will bring these technologies (which might be old hat to Tesla owners) to an entirely new market of flyover truck buyers.