This is the dock that lets Skydio drones truly fly themselves 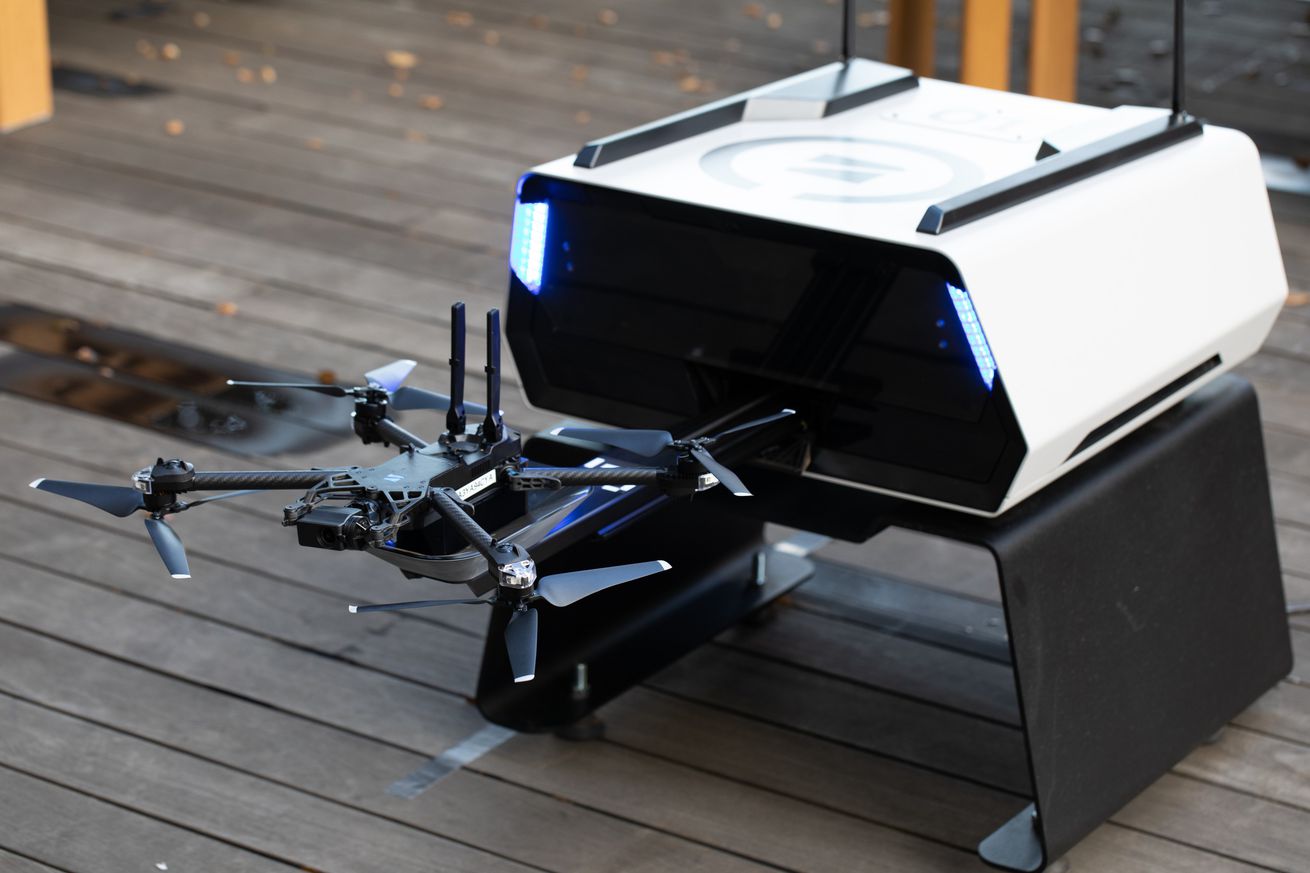 Skydio is the only company making drones that can largely fly themselves, able to sense and avoid objects so seamlessly you can hand a toddler the controls. But legally and practically, they need a lot of human oversight. Who’s going to charge the drone, update it, download its footage, and be the oft legally required visual observer to make sure it doesn’t crash into anything nearby?

But for years, Skydio has been working on the gadget that could eliminate pesky humans from the equation. It’s called the Skydio Dock, and it’s a 72-pound motorized box that can let these drones operate completely autonomously. I drove to Skydio’s headquarters in San Mateo, California, this week to check it out, watch it fly an autonomous mission, and used one to remote control another drone 17 miles away.

Originally announced in October 2019, the dock is basically an internet-connected robotic landing and charging pad that behaves in a very specific way to protect and service a Skydio X2 or Skydio 2 drone. As you’ll see in a video we’re finalizing now and will embed soon, it’s got a fancy motorized door that closes multiple times during launch and landing. It not only keeps rain and dust out but also makes sure a drone’s propellers and antennas properly fold and unfold.

There’s a big landing sign atop the box that a drone’s cameras can use to lock onto its landing point and a fancy robotic arm that slides out to “catch” the drone with a little scoop. Skydio CEO Adam Bry tells me that his drones reliably land on that scoop 99.9 percent of the time. When they don’t, they’ll typically just switch to plan B and safely land on the ground nearby.

When the arm retracts into the box, it pulls a newly designed Skydio battery right into a battery charging receptacle. The fanciest version of the dock even has air conditioning inside to cool down the battery for faster charging and a heater to melt any ice and snow that might build up on its roof as well as IP56 dust and rain protection. Skydio’s drones each have roughly 30 minutes of flight time, and it takes between 30 and 45 minutes to recharge and cool them before they’re ready for a new mission.

Perhaps most importantly, Skydio pairs the dock with an entire software suite in the cloud — a web portal you can log in to from anywhere to manage and remote control an entire fleet of Skydio drones. On one laptop, I tapped keys on a keyboard to remotely launch and pilot a drone on the other side of the San Francisco Bay, flying it up to a balcony in one of Skydio’s test warehouses as kind of a mock remote tour.

Then, I pressed a button on another laptop to fly a different drone through a preprogrammed inspection of the roof at Skydio’s headquarters, taking a look at the HVAC system as if I wanted to look for a problem. (It looked pretty clean, save for one peeling label, but I admittedly have no idea what to look for.)

Lastly, I set up my own waypoints for a third programmed mission simply by manually flying the drone to the places I wanted it to record. Early this year, Skydio introduced its KeyFrame feature that can automatically calculate an entire filming flight path from just a few waypoints, and there’s a version of it here as well.

And while all of that did require my human meat body to press buttons, the web client lets you schedule your fleet of drones to run those preprogrammed missions, too.

But, for now, there is one big technical limitation and another big legal caveat for those who might like to fly fully autonomous missions outdoors.

During every one of our demos, we noticed we were having mild connectivity issues, pauses in the video signal, lag, and a general lack of range to freely fly the drone around. That’s because, at launch, the Skydio Dock relies entirely on local Wi-Fi to communicate with the drone. There’s no direct connection between the dock and its drone, and the company didn’t have a clear answer as to why it’s launching without that feature.

Skydio marketing manager Erik Till says the machine’s ready for a direct connection — the hardware’s there, it’s FCC certified, and should allow for ranges of up to 6 kilometers (roughly 3.7 miles) — but it’ll require a software update sometime next year. LTE cellular connectivity for the dock is coming “in the near future.”

The other limitation is something Skydio says it can begin helping customers with right away: how to legally fly a drone without a human at the controls or a human observer. You see, the United States is one of the countries whose aviation authority requires a waiver to fly beyond the visual line of sight (BVLOS) of a human being, and even companies that get the government’s approval for a remote pilot sometimes need a local visual observer.

But Skydio says some of its customers have already gotten waivers for that, too — like Dominion Energy, which can autonomously inspect over 40 power plants across seven states without a human eye, and BNSF Railway, whose waiver specifically allows it to use docks as long as it’s flying those drones within 100 feet of the ground. Southern Company just got a waiver to autonomously inspect one specific power plant, too.

Skydio’s Bry tells me that part of the dock subscription service is regulatory assistance; the company will try to help other customers get BVLOS waivers as well.

But he also points out that there’s no regulation at all indoors. And Skydio has seen interest from companies that want this kind of thing inside their facilities for things like warehouse inventory tracking, where it’s working with a company called Ware to scan inventory by flying around and spotting bar codes.

There’s enough interest that Skydio’s building a second “Lite” version of the dock without all of the fancy motors — just a landing pad with an integrated pogo pin charger for a Skydio X2. It’s just 1.46 pounds with its bundled carbon fiber tripod, and here’s what it looks like right now:

Unfortunately, Skydio isn’t planning to make any of this available to individuals, and it won’t say what it’ll cost — only that it’s “in a different universe” from competitors that ship containers that cost half a million bucks. Bry says it’ll be “competitive with DJI but with much more functionality,” though, and I’m seeing some vendors price the DJI Dock, with an M30-series drone, for around $30,000.

Right now, a drone is something human beings take to a park, use as an inspection tool, or deliver the occasional necessity, usually with humans in control the whole time. But I wonder how long it’ll be before robot pilots outnumber the humans — our days might be numbered.

Skydio has a livestream of its Dock Day today if you’re interested in learning more.