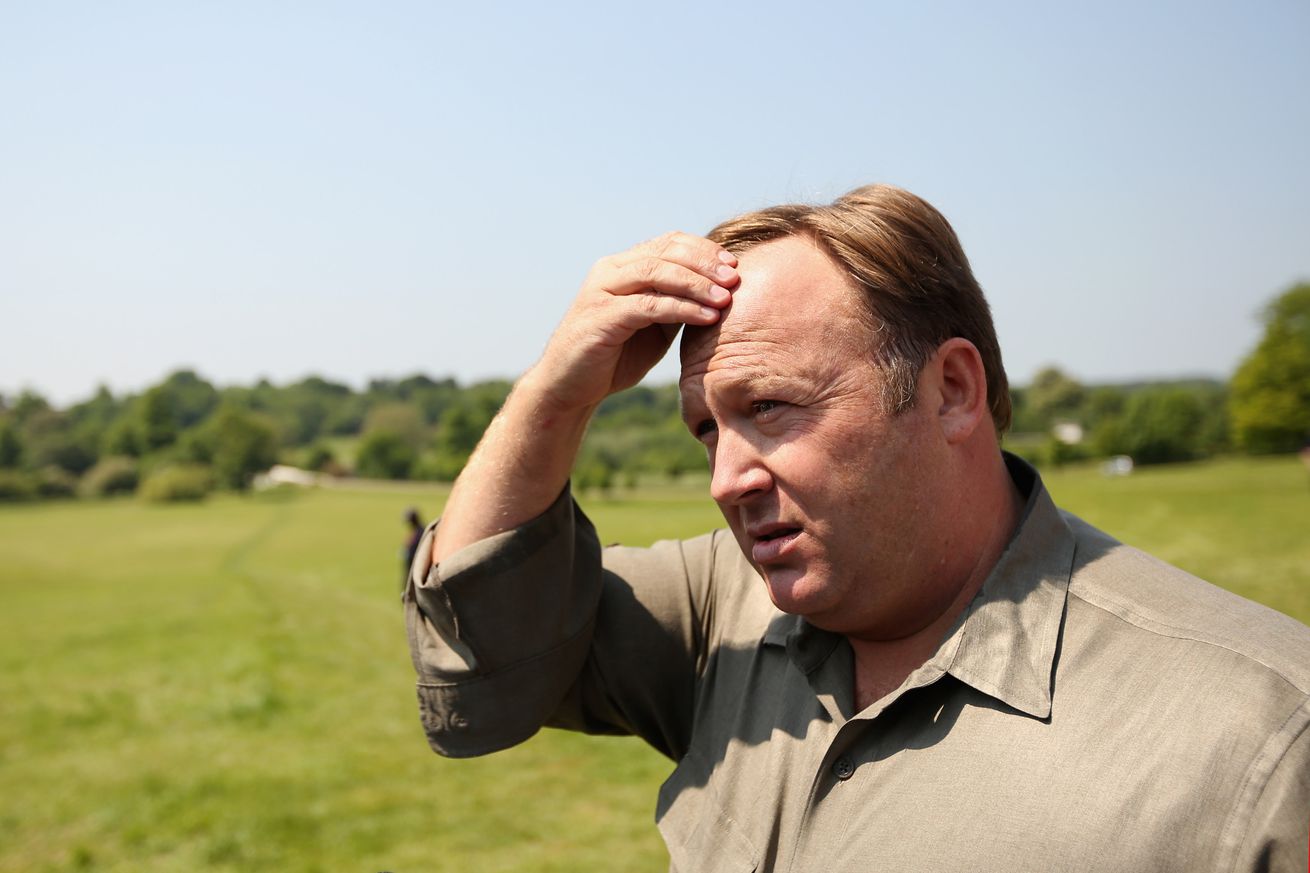 On Monday, the bottom dropped out for Alex Jones. After a series of tepid disciplinary actions, which the Infowars host evaded with ease, three of the biggest tech platforms acted in near-unison beginning late Sunday night. And the result is that one of the popular conspiracy performers on the internet has found his reach dramatically reduced.

By the day's end, Infowars had three major digital platforms left at their disposal: the open web, Twitter, and its native apps for Android and iOS. Jones lambasted the platforms' moves, telling The Washington Post: "You're on the wrong side of history mainstream media," Jones said in a text message to The Post. "You sold the country out, and now you're going to pay for it."

Platforms have long been criticized for not only hosting Jones, but finding him a large audience using social features and recommendation algorithms. But pressure on the tech companies intensified last month after CNN's Oliver Darcy asked Facebook a relatively straightforward question during a meeting between reporters and News Feed executives: How can the company claim to be serious about fighting misinformation while offering Infowars a large and growing platform?

"Different publishers have very different points of view," was the answer John Hegeman, who leads the News Feed, gave Darcy at the time. But that answer only spurred more coverage of Facebook's contradictory policies. The next week, Mark Zuckerberg fumbled an answer about Infowars by defending the rights of Holocaust deniers, and Facebook found itself in the midst of yet another public-relations crisis.

In the end it was hate speech, not misinformation, that got Jones booted from Facebook. But a close review of Jones' posts to social networks was never going to withstand close scrutiny. A disturbing number of his fans were found to have threatened and committed real-world violence. This April, in a little-noticed incident, he repeatedly used an anti-transgender slur on Facebook and appears not to have been disciplined for it at all.

Until Monday, tech companies' policies seemed to offer more protections to Jones than they did for families of the victims of Sandy Hook, one of whom moved seven times in an effort to escape the harassment of Jones' followers. (Jones has spent years promoting the lie that the government faked the Sandy Hook massacre as a pretext for taking their guns away.)

There will surely be much more to be said about Jones in the days ahead. For tech companies, the question is less what to do about Jones -- the answer has been clear for some time now -- than what to do about everyone copying his playbook. Misinformation and hate speech spread quickly on their platforms, amassing audience in the millions. The platforms would do well to ponder why that is, and what they could do about it.

Facebook to Banks: Give Us Your Data, We'll Give You Our Users

Facebook has been talking to banks about bringing customers' financial information into its system, report Emily Glazer, Deepa Seetharaman and AnnaMaria Andriotis. Facebook pushed back hard, saying the data would only be used for chatbots.

Another group that supports conservative causes has experienced the same delays when buying ads that target Spanish-speaking or Hispanic audiences on Facebook, according to an official there, who spoke on the condition of anonymity to discuss internal matters.

Facebook found similarities between public tweets and Facebook accounts that were later found to be part of a coordinated influence campaign, report Elizabeth Dwoskin, Tony Romm and Craig Timberg. But it took the company a relatively long time to link them together:

In May, Twitter turned over to Congress documents describing the activities of more than a thousand accounts it tied to the Internet Research Agency, the Russian organization that spread misinformation in the 2016 election. Congress publicly released the documents in mid-June, and Facebook began to scrape them for clues to shadowy operators on its network, said Andy Stone, a company spokesman.

Facebook's engineers, he said, were not able to tie the information to corresponding Facebook pages, even though some shared a name and posted similar content, two shared a creation date -- and one had an identical logo. Stone said that the trove lacked key technical details, such as an IP address, phone number or email, which made it hard to establish a clearer link.

Squire, an Elon University computer science professor, analyzed hundreds of far-right Facebook groups over a 10-month period to map their connections for a research paper, "Network Analysis of Anti-Muslim Groups on Facebook," that she will present at the Social Informatics conference in St. Petersburg in September. While she is no stranger to online vitriol, she said the anti-Muslim rhetoric on Facebook particularly "alarmed" her.

"I'm looking at these and I'm just thinking, if you substituted any other religion, it's so bad no one would think that this is OK," Squire told BuzzFeed News. "Why is this still up? What is going on?"

A bipartisan group of six US sent a letter to Google CEO Sundar Pichai on Friday asking for answers about its plans to build a censored news app for China.

The Times finds that people who have never used Google, Facebook, or Twitter are not particularly curious about it.

Campaigns on their own as cyber threats roil midterms

The work of protecting campaigns against cyber threats still falls mostly to the candidates -- and there's lots of work to do there, reports WHYY:

Every month for the last 18 months, [Sen. Kamala Harris'] office has discovered on average between three and five fake Facebook profiles pretending to be hers, according to a Harris aide. It's unclear who creates the pages, which are often designed to mislead American voters about the ambitious Democratic senator's policies and positions.

People are browsing the open web -- from inside Facebook!

While Facebook's use as a mobile browser was still far outweighed by Safari in most cases, due to the dominance of Apple's iOS in the U.S., the social networking app has achieved mobile browser market share of around 10 percent in many states, Mixpanel found.

Do tech workers make enough to buy a home?

At Facebook, the median salary is $240,000, and 51 percent of employees say they cannot afford a home in the Bay Area.

For journalists, is it time to delete your old tweets?

The old reason to create a page for your business was to get organic promotion through the News Feed. But now the News Feed is about your friends, destroying organic promotion, so pages need a new reason for being. Facebook's latest answer is to essentially serve as a free website builder for small businesses, a la Squarespace, stuff the pages with call-to-action buttons, and monetize it with ads. This all feels pretty weak to me, at least from a utility perspective.

Clay Shirky, one of the shrewdest internet theorists around, has noted that the faster the medium is, the more emotional it gets. Twitter, as we know, is pretty fast, and therefore runs pretty hot. (Emotional tweets, research has shown, travel more swiftly than anodyne ones.) We often become creatures of our limbic systems when we tweet. Our self-regulation deserts us (been there); our prefrontal cortex, responsible for executive function and impulse control, goes offline; we become reward-seeking Scud missiles, addicts in search of a fix.

We become, in other words, teenagers, who are notoriously poor models of self-regulation -- in large part because their prefrontal cortices are still developing and their dopamine circuits are pretty busy seeking stimulation. The psychologist Laurence Steinberg describes adolescents as "cars with powerful accelerators and weak brakes." The neuroscientist BJ Casey deems them "more Kirk than Spock."

The notion of "Time Well Spent" has been coopated and is rapidly losing its power, says Simone Stolzoff:

"Time well spent" is having its Kendall Jenner Pepsi moment. What began as a social movement has become a marketing strategy. Even Mark Zuckerberg's mission for 2018 is "to make sure the time we all spend on Facebook is time well spent," a clear reference to Harris' work.

But it's easy to co-opt "time well spent" as a value once you've already captured the attention of 2.2 billion users. When companies like Facebook check the time-well-spent box with a few cosmetic design changes, they get credit for putting a bandaid on the symptom without addressing the disease.

The hot new disease of right now is Snapchat dysmorphia:

Doctors have spotted a trend of people bringing in their own selfies, usually edited with a smartphone application, and asking to look more like their photos, according to an article recently published in JAMA Facial Plastic Surgery by researchers from Boston University School of Medicine's Department of Dermatology.

The phenomenon is known as "Snapchat dysmorphia," and it's causing widespread concern among experts who are worried about its negative effect on people's self-esteem and its potential to trigger body dysmorphic disorder, a mental illness classified on the obsessive-compulsive spectrum.

Body dysmorphia is a serious issue, and we shouldn't make light of it. On the other hand, I'm not really sure that "Snapchat dysmorphia" -- roughly defined as "the wish to look better in photographs" -- is really a new phenomenon.

At least, until people start asking for dog faces.